The pumpjack. The rabbits are long gone. 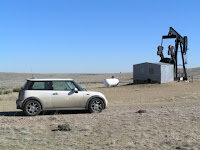 Note the level of filth on Cutest Little Car. I wish you could see the back -- you can't even see where the window is or what the license plate says. She wants to be a Jeep when she grows up.
(I know, I know. I'll get stuck like a mosquito in amber if I produce any more sap. I'll stop.)
So I worked in Gillette, where I probably should have taken more pictures because Gillette has a lot to offer, photo-op-wise. There's an enormous amount of outdoor art in Gillette. In fact, in the "downtown" portion of Gillette, there is a sculpture of some sort on every single street corner. We're talking upwards of 20 street corners, plus some random non-streetcorner art. Most are cowboys or eagles or what you might expect from a relatively small western mining/ranching city, but there's a handful of abstract modern sculpture and -- for reasons unknown -- a panda mommy cradling a panda baby while eating a bamboo frond that dribbles out of her mouth almost to the ground. I love that sculpture. There's something weird about the proportions or something, so it looks odd. Besides, it's so out of place. It's right in front of a Savings & Loan.
There's also a liquor store with one of those adjustable signs that said, "Adult Day Care." Now, that could just be funny, but in smallish cities like Gillette, buildings are often shared by odd bedfellows (as in there could potentially actually be an adult day care centre sharing the building with the liquor store... probably not IN the actual liquor store, but guess where I'd want to go when I need adult day care if it is). I really, really wanted a picture of that to post here, but I forgot about it until I was halfway to Basin (see below). It should tell you something about my level of commitment (read: insanity) that I seriously contemplated going back to Gillette just for that image.
Oh! And The Goings. The Goings may be a sort of nightclub in the Chop House restaurant (I've never been. I'm making up my own stories about what goes on in the backrooms and barrooms of Gillette). On the side of the building is this enormous, spooky, black-n-white painting of a train COMING RIGHT AT YOU. It's onimous (or even ominous) and very gothy (which has to do with vampires and moping and Bauhaus and stuff, as opposed to "gothic" which is a lovely type of novel or architecture), though I'm guessing that's not what the artist or proprietors were going for.
So you can just imagine all those pictures I *didn't* take. Um... and add antelope to that little photo album in your head. Wyoming is lousy with antelope. There may be more antelope than ants in Wyoming, but I managed to get not a single antelope picture.

(Going through my head right now: "...where the beer and the canteloupe play...la la la")
[SUMMARY: a thousand words hopefully paint a picture, since I didn't get actual photos of stuff I'm willing to describe at great length.]
After Gillette, I headed to Basin, county seat of Big Horn County.

Three things I truly love about my work:
Heading to the Big Horn Mountains 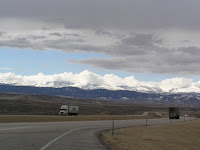 How could you not love that? Of course, there can be weather issues. For instance, just west of Ranchester (really), this is where I came from: 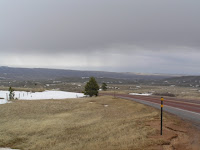 And this is where I'm going (in the north loop of the Big Horn Mountains).

That's snow in them thar hills 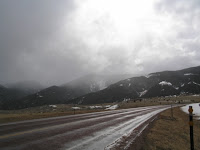 I had a spiffy photo of the blizzard I braved (right off the dash of the car, only about 100 feet of visibility), but it somehow didn't make it off the camera or something, so you'll have to imagine that along with all of Gillette.

I got to Basin about 4:30, just early enough to get a taste of what I was up against, but not long enough to do actual work. 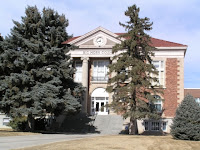 I asked a nice lady in the courthouse if she could recommend a place to stay. The fact that she said, "In BASIN?" with such naked shock did not bode well for the tourist prospects of one Basin, Wyoming. She sent me back to Greybull (you can check a Wyoming map if it's really important to you to see exactly where I've been) and recommended I stay at the Greybull Motel, definitely the nicest place in town. "If you can't get into the Greybull... um... I guess the Antlers is your next best bet."

On the drive betwixt Basin and Greybull (all eight miles of it), I had misgivings. What if the Greybull Motel was some fancy place that was $120 a night and I'd somehow given the impression I was accustomed to (or in the market for) a Waldorf-Astoria experience right there in northern Wyoming? I needn't have worried.

This is the beadspread in Room 104 of the Greybull Motel... Cowboys AND Indians! 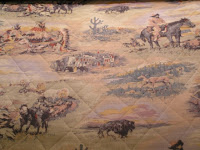 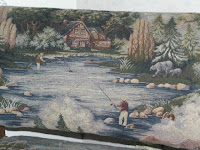 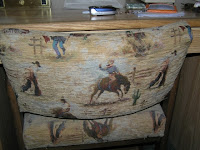 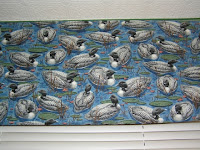 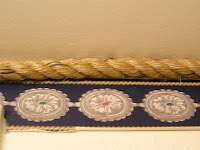 Side note: I wandered to one of the (near as I can tell) two restaurants in Greybull that are not Subway and ordered a salad. When the little waitress girl with all the eyeliner brought my "salad," I almost, was *this far* (fingers nearly touching) from saying, "I didn't order a hamburger." See, the "salad" consisted of several large iceberg lettuce leaves (the sort normally associated with hamburger garnish), several rings of onion (the sort normally associated with hamburger garnish), two slices of tomato (the sort normally... you get it by now) and four dill chips. The small tub of dressing on the side was the only concession to the concept of salad. Sometimes it's hard to get good food in small towns. Next time, I'll try the Subway.

[SUMMARY: The Greybull Motel would make Martha Stewart stroke out, but it's the kitschy coolest best. Don't eat at Ernesto's in Greybull.]

Actual work was accomplished on Friday. Slow work. I had to make 168 pages of copies off microfiche, which is usually a fairly quick and easy task, but Big Horn County has the world's strangest microfiche printing system. I don't know if you've ever printed off microfiche before, but you usually line up your doc in the MF reader, press the giant orange (or green) button and voila! Seconds later, a copy!

The lifecycle of the Big Horn microfiche printer, ladies and gentlemen.

After about ten pages of this, I went to the car and got my knitting (it should be noted, for illustration, that my car was roughly one block -- part of which includes the stairs you see in the photo of the courthouse -- from the microfiche machine, and I hit "enter" just before I went to the car and it was just finishing printing when I returned. I did not run). I knitted TEN ROWS (For those of you scoring at home, that's five times the rows knitted during four hours of "America's Next Top Model, the Marathon" over the previous weekend) on the Stupid Blanket.

Big Horn workspace, plus MF reader and the Stupid Blanket at work 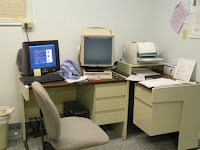 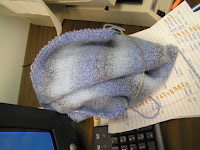 As you can see, I had a fascinating few days. Y'all are fascinated. Y'all are contemplating a career in landmanning. Y'all only wish you could work with MF machines all day (and believe me, MF takes on its darker meaning pretty quick when you waste... um, SPEND... four-plus hours printing documents on a slow-ass machine).

At least I got some knitting done.

[SUMMARY: Despite the fact that I worked with a slow MF machine all frickin' day Friday, land work is FASCINATING. Everybody wants to be a landman 'cause you get so much knitting time.]

**FOOTNOTE (asterisked): That's The Count from Sesame Street, in case you couldn't get it through the narrative sound effects.

**FOOTNOTE (unasterisked): Male Lady alert! Upon return from the wilds of Wyoming, I had a message from Kelly from Thursday night saying, "Wyoming girl! Where are you? When are you coming home? The Boy** was doing laundry next door to Re-Favourite Bar** and Male Lady** sent her son in and then she called my cell phone and said he'd never cared for me and..." (then my VM cut her off and I had to wait HOURS until Saturday afternoon before I could find out what happened)

For the record? Call from PNhead at 6:42 Thursday evening, about the time Male Lady sent her son into Re-Favourite Bar after Kelly and The Boy. I'm telling you, it's enough to make me want a taser for my purse.

**FOOTNOTE WITHIN A FOOTNOTE (asterisked): Kelly uses their actual names.

On a not even tangential note, Duke should NOT get a six seed in The Tournament. I am a long-time Duke fan when it comes to March Madness (read: not so much the lacrosse team), but even I know better. In fact, I may go so far to say Duke should have been benched in favour of bubble-y little Drexel, who probably deserves the slot more.

Oh and also...if you had a wishlist you might get stuff from it.

I'll see what I can do for you. I'll post it under the Secret Pal thing on the sidebar.