My Life in Munitions Engineering

Christmas my freshman year in college, my father gave me a book called "Discover What You're Best At."† It consisted of a number of sections, each with an SAT/IQ-style test to evaluate the test-taker's proficiency at a career skill like logic, clerical, business acumen.

When I got back to my dorm room in January, I dutifully waited for my roommate to go out catting about‡ so I could have the two hours' required uninterrupted peace to get through the tests. I tested. Carefully, I tallied my scores.

I was off the charts in all categories%... except one.

You know those spatial relations tests? The ones where they show you a bunch of cubes stacked together in a configuration, then ask you to choose which one is the same, but from a different angle? That one, not so much.

Checking my scores against the career possibilities listed in the back of the book, it said I could be anything I set my pointy little head to§ except a mechanical engineer or munitions expert.

It said nothing about modular knitting. Maybe it should have.

As I may have mentioned, I'm knitting two Tamarix Quilt baby blankets¶ for my two favourite# cousins.

Heather, the designer, is very graciously shepherding@ a KAL on Ravelry. Damned good thing for some of us who are destined never to field strip an AK-47.

There's a tutorial in the magazine, part of the pattern practically, that shows how to knit the whole thing together as you‡‡ go. Problem is, my spatial retardation doesn't allow me to go there without a fight.

First, she gives instructions on how to join a square on the left or on the right. It took me ten minutes to figure out whether it was the new knitting or the old square on the left... but I got that one on my own.

Then I cast on the requisite 39 stitches for a new square, picking them up along the edge of the existing square. Only I didn't think far enough ahead to realise that 39 stitches is two sides of a square, so I should only have picked up 19 or 20 stitches, then cast on the rest. I was halfway through the new square before I realised something was horribly wrong. 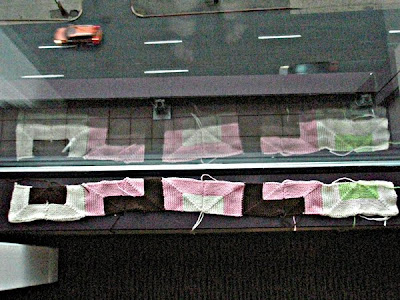 NOW I've finished the first row of squares. I told Heather I was planning on knitting ten strips of squares and sewing them together, and she pointed out§§ that I¶¶ could knit the whole thing together as I went along.

I am paralysed. How should I proceed? Should I 1) dive in and try to knit, sometimes joining on two sides, 2) stick with my original ten-strips-and-sew plan, or 3) try building a bridge in my living room for mechanical aptitude practice?^ 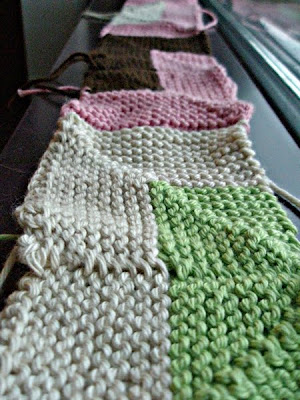 †FOOTNOTE (crossed): Possibly as a reaction to me telling him I was a theatre major.

‡FOOTNOTE (double-crossed): I believe it was 2.2 seconds, a statistic to make Porsche jealous. My first roommate was... social.

%FOOTNOTE (percented): Which, by the way, did nothing to help me discover what I was *best* at.

§FOOTNOTE (swerved): "Free to Be... You and Me" is earworming me like a mother right now - those Target commercials don't help

#FOOTNOTE (pounded): ...and most fertile.

§§FOOTNOTE (I am incapable of straight thinking): Very optimistically, given my proven inability to turn right when the situation called for it.

¶¶FOOTNOTE (beat the drum slowly): And by "I," I mean "Heather or some other munitions expert."

^FOOTNOTE (careted): Or - and I just thought of this one - I could knit in a spiral, forcing me to knit the last square together with FOUR other squares. To gain saint points, of course.
Posted by Marin (AntiM) at 1:06 PM 7 comments:

I knew all this sainthood shit would pay off eventually and I would be rewarded.
Posted by Marin (AntiM) at 4:55 PM 8 comments:

Labels: 2010 - Sainthood through Zen, Boy do I have good news for you, Brilliant, Happy-Making, Knowing Way More About Marin Than You Really Need to Know, Movie Stalker 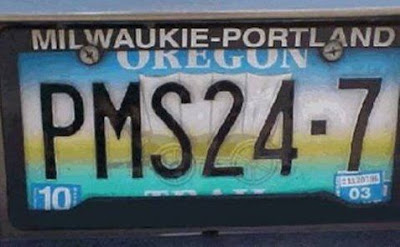 How Did This Happen?

How 'bout a big, ol' wide-tongued full lick of the pig?

Dr. Doom's 6th birthday was animal-themed and included a visit from the Jungle Lady and her many reptiles, amphibians and bugs.

There was a snake cake. 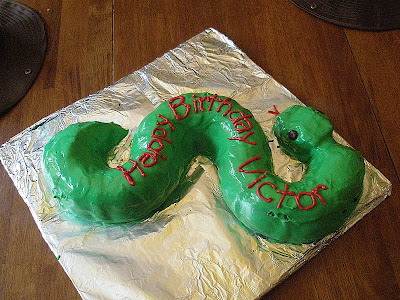 A rubber gift snake for the birthday boy... 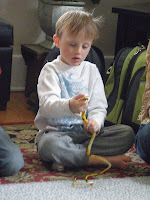 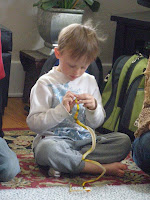 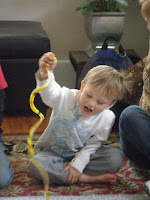 ...which maybe should have been presented at the end of the show for minimal distraction.

Anyway, there was snake discussion. 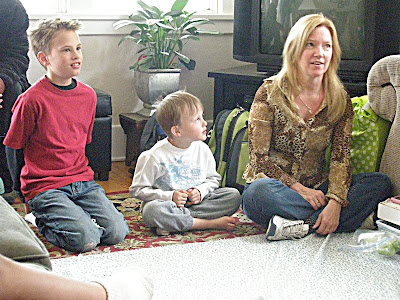 And snake jewelry, both in the form of a Scarlet Kingsnake bracelet...

...and a python necklace. 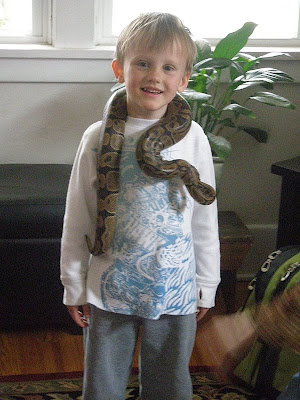 I don't know about you, but I would never want to subject a snake to a passel of six-year-olds. Six is a... squirrely age. Though it was worth the price of admission for this exchange:

"My brother found a snake when he was camping and he caught it and he brought it home and now he has, like, six snakes."

"My brother is in jail."

The turtle races were pretty good too. 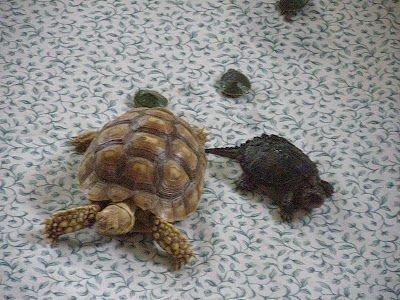 [SUMMARY: And a good time was had by all... except maybe the snakes.] 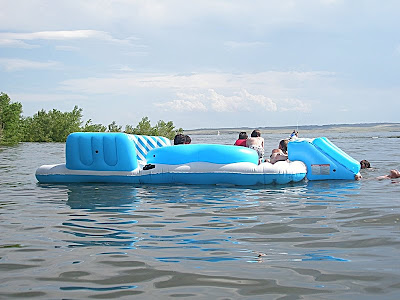 ...but that didn't stop me from crossing "skinny dipping" off my bucket list.

As has become tradition,†† Shanny and I stayed up late one night at the campfire chatting, stargazing and exploring the funky, soulful world of Shanny's massive music collection.

Just after the moon dipped below the southeastern horizon, Shanny said, "I don't want to freak you out or anything, but it's a beautiful night, the weather's perfect, the moon's gone down and there's nobody around. You want to try skinny dipping?"

There we were, neck-deep in water, looking at the rural sky coated in a crust of stars. The water was cool, but not chill. Nothing nibbled at protruberances. The small-town tide lapped at our every nerve ending. We chatted, then wrapped up and got warm by the fire.

The next morning, Connie greeted me with, "I understand you got naked with my husband last night." And she giggled.

I love my friends.

Other than that, there was the usual water, sky, recreation... 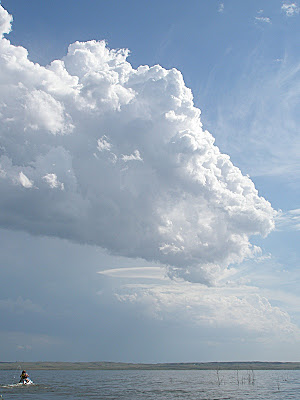 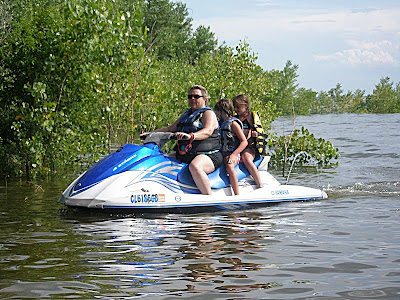 Well, the Wave Runner was new this year.

But there was the usual floatilla of shiny plastic inflatables. 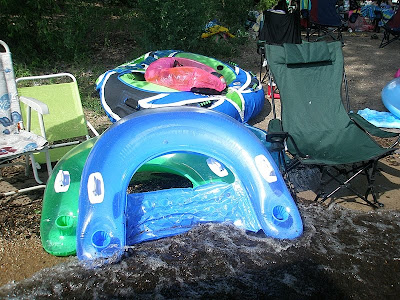 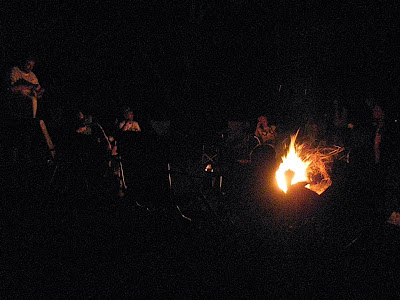 In scientific news, The Lake was up 27 feet from where it was last year when we were there - at 96% capacity.‡‡ 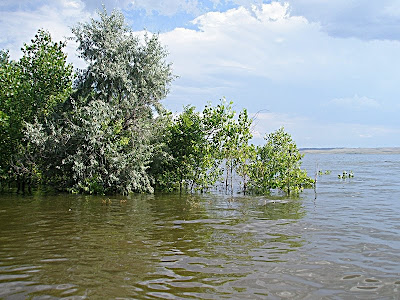 There wasn't a lot of beach to go around and we teamed up with a group of campers to hold our grove... 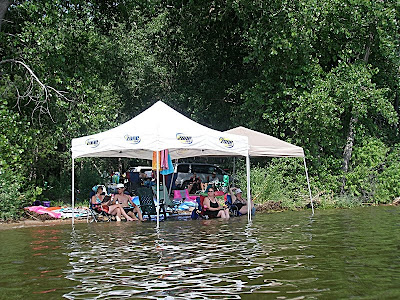 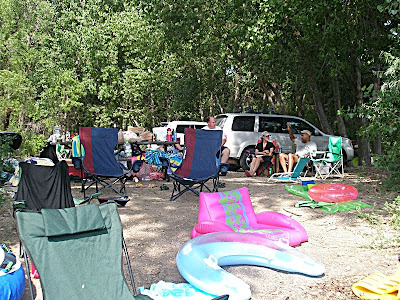 ...which was under surveillance from the myriad campers who didn't come in on Thursday and maybe never found a spot to pitch their tents.§§

But, like the steadfast dragonflies,@ we held our space for the weekend. 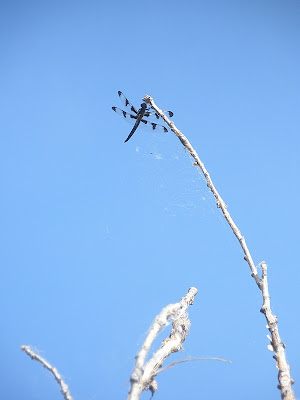 Until it was time to say goodbye for another year. 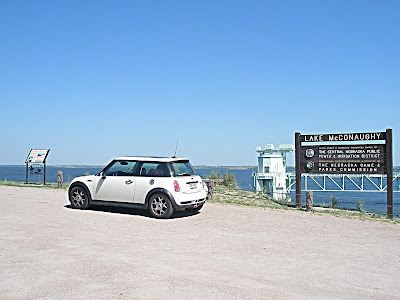 [SUMMARY: A good time was had by all.]

My how things have changed. Like Times Square, Disney has had its influence. Y'all know I've got nothing against pirates, but a good quarter of the faire now seems to be devoted to Captain Jack Sparrow.

There are no wenches, those dingy, corseted broads who kissed men with overpainted lips of crimson, neon pink and orange for a dollar. All in all, the thing where absolutely everybody is trying some gimmick to get a buck is gone.

On the bright side, there were greyhounds and ducks and the cutest little piggle## you ever did see. And a spiffy carillon. 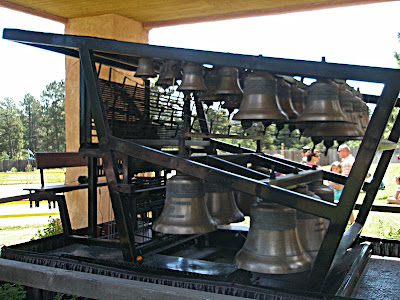 On the other hand, a museum of medieval torture devices that was simply awful. And not for the torture.

Plus? A woman in full costume was brandished a frickin' Twilight umbrella and talking on her cell phone when the rain started. That's so not 15th century. 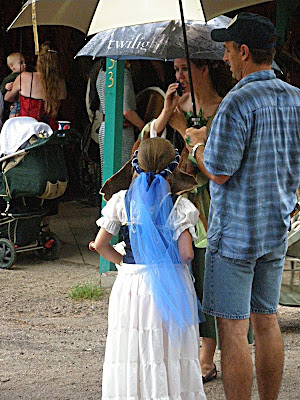 We decided we don't need a Renaissance Festival fix for another 20 years.

[SUMMARY: Disney should stick with movies.]

Back in the day, Steve an I both worked at the historic Elitch Gardens,††† which was only blocks from Lakeside. From the top of the Twister at Elitch's, you could see the Vegas lights of the entry tower at Lakeside.

Now, Elitch's was classier. It maybe had better rides. And it was neater, more prone to fresh paint and never a lightbulb out of place. But Lakeside had seedy charm. There was a Fun House and far fewer families went after dark. It was a brilliant hub of overdressed late-teen and twenty-something single life.

Back in the day.

Now the Fun House is gone, possibly a victim of insurance regulations.‡‡‡ Every third ride was deconstructed or closed for repair. 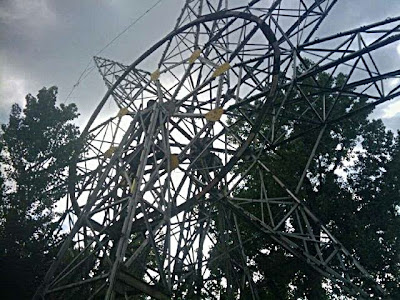 Though the park was supposed to open at 6:00, there wasn't the slightest movement to test the rides, set up the ticket booths, start the hot dogs a-grillin'... it was an employee ghost town until nearly 6:30. At that time, four rides were running.

As the night went on, more rides opened - the ones that weren't under repair or chopped for parts - probably to save on payroll.§§§ 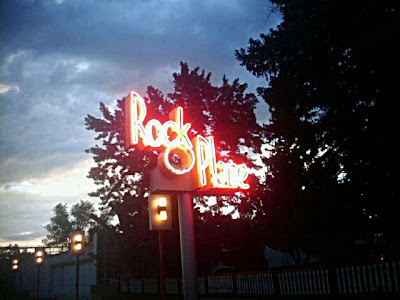 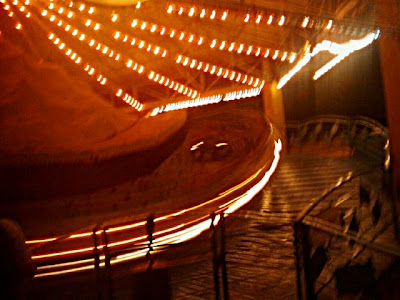 The Wildcat coaster was fun and the Zoom was great fun.¶¶¶

But we left at 9:30, having ridden everything but the Merry-Go-Round, and agreed that we could go another 20 years without going to Lakeside.

[SUMMARY: We are crossing things OFF the list, Steve and I.]

That's how I spent my summer vacation.


†FOOTNOTE (crossed): Through words, pictures and footnotes, and mostly as an exercise in cleaning off my camera.

§FOOTNOTE (swerved): The only place besides Steve's living room where anyone has understood my rock-paper-scissors-lizard-spock shirt.

¶FOOTNOTE (paragraphed): Seedier than field full of wheat, sadder than a lost puppy.

††FOOTNOTE (ddouble-ccrossed): Except that year we didn't.

@FOOTNOTE (atted): Of which there may been more of even than children.

¶¶FOOTNOTE (two left feet): As a tiny, geeky confession, I worked at the Renaissance Festival in the summer of 1986. It's what you do if you're a theatre major with a Dungeons & Dragons past.

##FOOTNOTE (tic tac): So cute he made me baby talk. And I usually only do that ironically. Hey! Ironic Babytalk would be a great name for a band.

†††FOOTNOTE (my cross to bear): NOT to be confused with the travesty that is Six Flags Elitch Gardens, and current home (right across the street from the theatre) of your dear ol' AntiM - I live where (I say) the floral clock used to be. Steve says it was the administration building. Until we have pictures, I'm sticking with "floral clock."

§§§FOOTNOTE (a shocking turn of events): Steve thinks maybe more because the employees straggle in, hungover, whenever they straggle in.

¶¶¶FOOTNOTE (upright brigade): Which is a skyshot like the one on top of the Stratosphere in Vegas, with a slow lift followed by a free-fall. I couldn't help point out (because I'm twelve) that it looked like a giant, colour-changing penis against the dusky sky, to which Steve added the image of a cock ring carrying people up and down it. Quite ruined the ride for Steve.
Posted by Marin (AntiM) at 9:13 AM 3 comments: 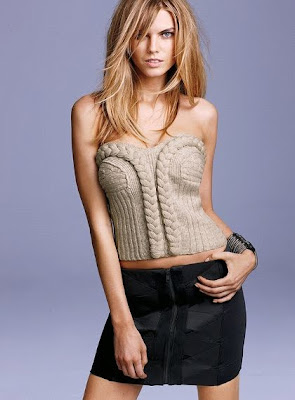 
And here I'd always thought of her as more of a crochet girl.
Posted by Marin (AntiM) at 7:51 AM 2 comments: