My Friends at Nintendo in Seattle

Some of you may remember how tired I got of SXSW on The Twitter.

Sorry. There's a chance I was at least that annoying during the Nintendo Ambassador Roundup.†

For one, being treated like one is important actually lends to the illusion that one is actually important, and for this one, those illusions are what makes the world go 'round.‡

For two, it was amazing meeting people who are in this particular boat with me.

Many of you may not believe this, but I'm actually kind of shy around people I don't know. I started to dread the whole thing somewhere over Nevada.

Brand About Town, a marketing company that does a fantastic job for Nintendo,* flew us in to Seattle Thursday, March 31. There was a reception Thursday night that started out nerve-wracking for me, then became enlightening.

There were *guys* there.

I came into the Nintendo Ambassador thing under the Girls' Guide to Gaming, which was a marketing push to women who weren't necessarily video gamers.§ The idea was to show that there is more to the Nintendo family than shooting aliens and playing football. You don't have to be a teenage boy to enjoy a nice gaming system.

They created a comfortable, supportive, fun environment for us to try out their product and learn just how much we could get out of it.

Turns out, before there were Girls being Guided in Gaming, there were Wii Families. Somewhere along the line, there were mommy bloggers. And I think there was a sort of community effort, since a couple of people I met got involved via a Boys & Girls Club-type program and through working in a nursing home.

Yeah, this is the kind of stuff that trips my trigger.

Friday, we spent the day at Nintendo America HQ. This pic was provided by Brand About Town as maybe the only sanctioned photo of the building: 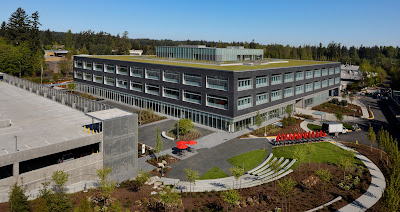 You'll note this isn't from our trip. You can tell because there's blue sky. Our trip looked more like this:¶ But none of that matters when you're inside with a bunch of Nintendo nerds and the latest technotoy.

This is Jen. Jen lives in Nederland# and has a food-ish blog. She is a professional photographer, so you really wish you were following her because her pictures are probably much better. 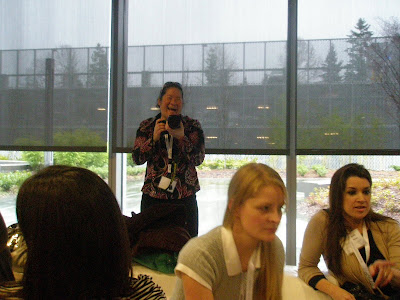 Now, our photog rules were pretty strict but simple: photos only inside the rumpus room, and 3D must be turned off if you take pics of the game. So here's a 2D Nintendog for you: 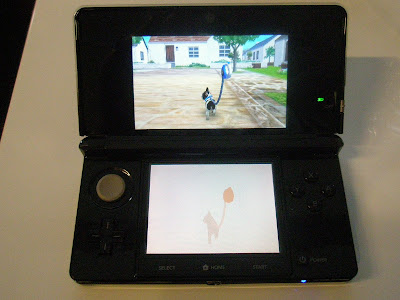 The 3D-without-glasses on the Nintendo 3DS works basically the same as a View Master. It's essentially an electronic stereopticon. Paired images push your eyes to focus in such a way that it brings depth to the image.††

Besides the 3D gaming, there is a 3D camera and 3D video viewer. We played with those too.

Actually, we played with eight different games in much the same setting as my Girls' Guide to Gaming experience: comfy couches, games to play with and a Nintendo expert to help light the way. 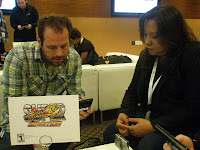 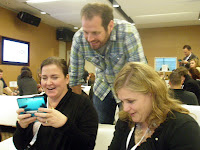 This was our tour guide for Street Fighter. He was nice and helpful,‡‡ but as it turns out I'm a Street Fighter savant, I didn't need too much hand-holding on that one. 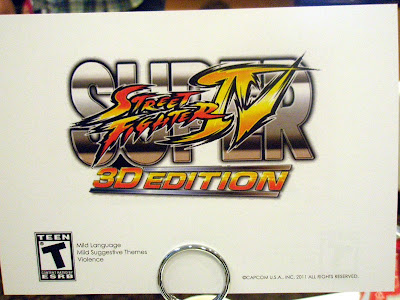 I appreciate the 3D on the game, though my tendency to steer the game and wiggle like a banked trout as I beat the snot out of a fellow ambassador can diminish the effect a little.§§ The 3D wasn't the most impressive part to me, though.

I really like the StreetPass feature. You build a Mii avatar for yourself, then if you turn on the communications and allow the flow of information, if you pass someone who has a Nintendo 3DS with StreetPass up and running, it swaps your Miis. The Miis carry puzzle pieces and act as heroes to save your Mii from a dungeon.¶¶

OK, that sounds dorky and weird, but it's very cool. And I tell you, I almost kissed a stranger when I got my first StreetPass friend outside the Nintendo gathering. It was like finding a hundred dollar bill in a rest stop bathroom.

The thing that really blew my mind, though, was the AR cards.% They're freakin' magic. That's all there is to it: magic. How can you play a whole series of games by pointing the camera at a question mark on a card?^

Now, for your dining pleasure, here's the montage of People Enjoying the Nintendo 3DS.## 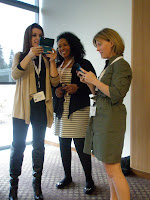 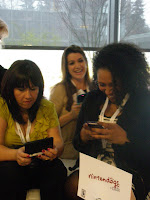 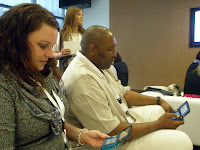 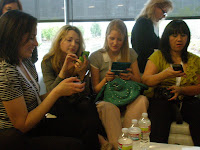 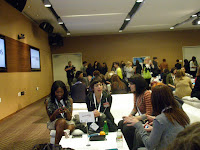 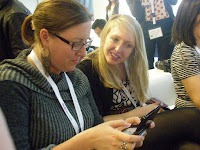 The President and COO of Nintendo of America, cult figure††† Reggie Fils-Aime, talked to us for awhile about the company and the Nintendo 3DS itself. I'm impressed with the conscience Nintendo showed in testing the 3D and its effect on kids' eyes. Plus, great parental controls.‡‡‡ 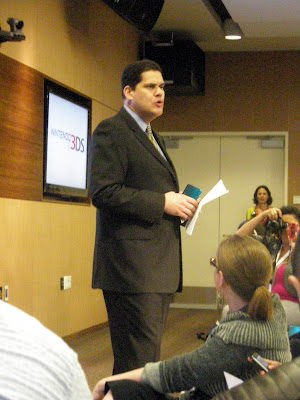 I also love that the employees I talked to call him "Reggie" and speak like they're basically buddies.+ Not in a creepy, bootlicking way, either. I get the feeling Nintendo is a fabulous place to work.

And I couldn't take pictures, but their building is beautiful and comfortable. Sustainable and green, of course, with really nice bamboo floors. There's a great cafeteria§§§ and a floor that's just for hanging out, meeting and - with a rooftop deck$ - getting a little fresh air.

OTHER COOL THINGS ABOUT THE NINTENDO AMERICA HQ:

We got a chance to tour the building with a couple of Nintendo employees, who gave us some Nintendo history and personal insight into the company.

Then we got to go shopping in the Nintendo employees' store.¶¶¶

Friday night, there was a small reception while we gathered to have the buses take us to a nice dinner. I went to Anthony's, which is a Seattle chain and maybe not the most avant-garde choice I could make, but I went for the view. 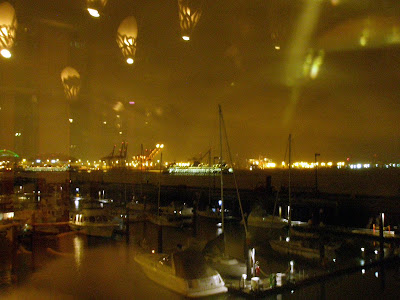 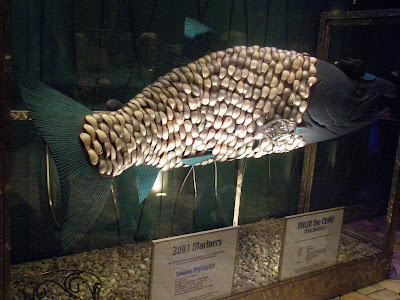 The trip was a total success for me and I'm excited all over again about the state and direction of technology.

Particularly in technology that makes me the coolest aunt in the world.


†FOOTNOTE (crossed): Of course, my trip only lasted a couple of days. SXSW was, like, six months.

‡FOOTNOTE (double-crossed): I may be needier than I like to admit.

*FOOTNOTE (yes, an asterisk): By the way, as cool as it was to find out about Nintendo, I'd like to spend some quality time with Brand About Town people. I suspect their jobs are very, very cool.

§FOOTNOTE (swerved): You may recall the series of ads with actresses and their kids and friends. I've never felt so close to Lisa Kudrow.

¶FOOTNOTE (paragraphed): In the half-dozen times I've been to Seattle, this is the first time I've ever seen rain. I was beginning to think the rain stereotype was a way to keep tourists away. Kinda like how we use snow in Denver. By the way, that's the company soccer pitch we're walking toward. Yes, there is a Nintendo company soccer pitch.

††FOOTNOTE (ddouble-ccrossed): Go look it up if you want something more scientific.

§§FOOTNOTE (dizziness): You pretty much have to be looking at it straight on or you can see the pictures split. It's disconcerting to be shooting ships from your submarine and you tilt to allow for the motion of the ocean and suddenly you're drunk and seeing two of everything. Other people may not have this problem.

¶¶FOOTNOTE (Street Fighter combo - trust me): And you can earn HATS for your Mii.

##FOOTNOTE (couple of extra pounds *ahem*): Insert inspirational soundtrack here. Also: see the fourth picture? That's Sarah and Sammy. Sarah's lots of fun. I'm following her on The Twitter at @pinkshoe. And I don't have a pic of here, but Erini at @myadorkablelife is also on my list. In case you want to be like me.

†††FOOTNOTE (Cross in 3D): When what you say sparks and Internet meme ("My body is ready"), you earn cult figure status. Plus, people who know better than I term his COO-ship at Nintendo the Reggielution. That's cult status.

‡‡‡FOOTNOTE (3DDoubleCross): When you want to be sure the Keepers of the Nephews don't cut off your supply, you're very sensitive to things like "age-appropriate" and "parental controls."

+FOOTNOTE (plussed): One of our tour guides told us that when Reggie's in his office, people go by waving their Nintendo 3DSs hoping to get his Mii on their StreetPass. THAT'S cult status.

§§§FOOTNOTE (3DSwirly): With the coolest soda machine ever. A little elevator travels up to your choice (A12, for instance) and slides under it, then moves down, then right, then angles your drink so it slides at a 45-deg angle into the delivery slot, where it is presented to you. I could have spent all day plugging dollars into the machine and watching it. I may be Nintendo's perfect Guinea pig.

$FOOTNOTE (moneyed): A *living* rooftop. Plus, the conference room and areas up there are named after Prisoner of Zelda characters.

&FOOTNOTE (ampersanded): Maybe in all of them. I was only in one, and it had a Panaboard.

>FOOTNOTE (greatered): My favourite: Another Castle.

###FOOTNOTE (3DPound): The fish is wearing a Seattle Mariner's cap, for those of you scoring at home.
Posted by Marin (AntiM) at 6:49 AM

I wasn't keeping score but you sure were wined and dined. And, of course, you're ALWAYS important*, in my book.
*Just now I thought of the "I'm impotent and I'm gonna dress like it" joke. Thought you'd appreciate the word association.

Oh, yeah. There was lots of wine and lots of dine. Plus a 3DS of my very own.

Thank you for that. And for saying I was important too.

Your work there is done.

Oh, yeah. If I've impressed your boy, I can die happy.

Does this count as a miracle toward my sainthood?

Hell, yeah, it does.