Quite possibly not the news you would expect, given my latest post and assorted Twitterpation,† but some news.

I have just returned from San Antonio and the wedding of LisaB and Edmundo.% Pictures to follow‡ shortly, but for now, three things:

[SUMMARY: There is no summary. These things don't go together except in my head.]

Due to my beloved Coach K's victory over the WVa team that propelled me to giddy heights of March Madness bracket standings, I have catapulted once again, now ranking a stunning THIRTEEN§§ out of 1124 in the 850 KOA brackets.

All hale the mighty BOB!¶¶ 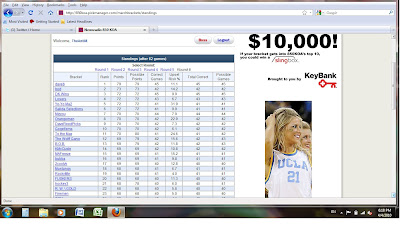 [SUMMARY: Once again, yay me.]

By the way... one of the perqs under this job offer is a full four weeks' paid vacation my first year, plus the eleven paid holidays everybody gets.

The executives making the offer pointed out that I would've had Friday off and paid if I were working for them right now.

%FOOTNOTE (percented): Which are actually two separate things, as Lisa got married in Wimberley, home of one of the first (when I was eight - not this weekend) of my many near-drownings... a little story I'll probably include when I share the pictures and the shower story. Huh. Water and Wimberley and Marin are a scary combination.

‡FOOTNOTE (double-crossed): And a funny story concerning a shower.

§FOOTNOTE (swerved): Or a birthday... or a free Tuesday night...

¶FOOTNOTE (paragraphed): There may have been alcohol involved.

#FOOTNOTE (pounded): Women's. I flew down with no fewer than twelve NCAA women's coaches. I seriously thought there might be some sort of lesbian festival in San Antonio this weekend before I found out I was going to Tournament Town.

††FOOTNOTE (ddouble-ccrossed): Until you've seen cheerleaders form a pyramid on a barge, you haven't really lived.

‡‡FOOTNOTE (doubble-crossssed): Not to mention - because the sentence was getting too long, so I didn't - ESPN, CNN, travelling teams from the local news stations pertinent to Stanford, UConn and whomever else was in the women's Final Four.

¶¶FOOTNOTE (beating a dead horse like a drum): Beasts of Burden. B.O.B. My perennial fantasy sports team name... in case I haven't already explained that.
Posted by Marin (AntiM) at 6:27 PM

Change is really scary sometimes. Have you done a "Pro's and Con's" list to help decide if taking this new job is the right thing to do?

I know! What if I make the wrong decision and SCREW EVERYTHING UP?

Yeah... but there are so many pros and so much subjectivity (the number crunching was the easiest part, says the girl who can't count to four) that it's only of marginal use.

I think I've made up my mind, though. I'm going to tell all the work people first, then I'll hash it out in its particulars here.

Glow sticks are VERY cool for weddings. I found they also work for outdoor dances and parties, like that. http://coolglow.com/