Which sounds like the title of a highly acclaimed runner-up for the Man Booker Award or something.† 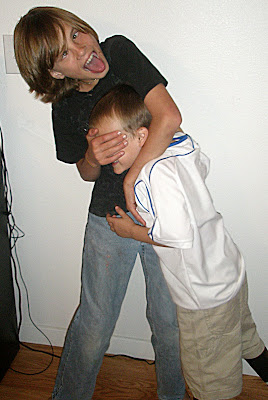 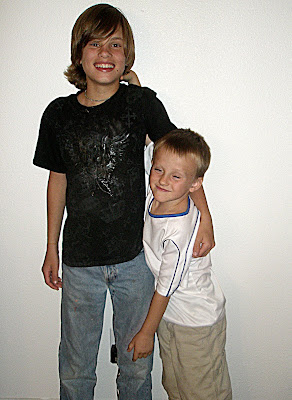 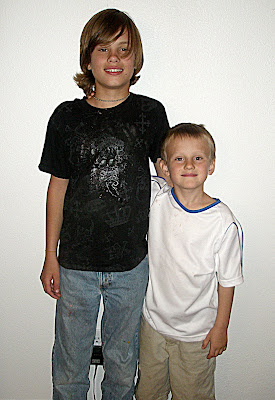 Actually, Tallest, Hairiest Nephew and I baked a cherry pie‡ while Dr. Doom was at soccer practice.§

But they *so* look capable of pie making, don't they?¶

I had to tell them the old-people-nostalgia story of how their father was exactly the same way, and back when we still had film in our cameras,# it would cost me oodles to foot the bill for the film we had to go through so he could make faces for 20 frames before we got down to one good, serious shot.

Then I had to explain the word "hereditary" to them.

Trying to build hope for the future, one nephew at a time.‡‡


†FOOTNOTE (crossed): My old book club would definitely swoon for it.

‡FOOTNOTE (double-crossed): Handmade crust and all. Skillz... we has them.

§FOOTNOTE (swerved): And I went to his soccer game this weekend. He is not a soccer talent. Brother says worse than usual, but I notice a certain sibling tendency that includes a complete lack of awareness of the ball and such joys as watching clouds while the game is going on around him.

¶FOOTNOTE (paragraphed): My tongue is firmly planted in my cheek.

#FOOTNOTE (pounded): You kids get off my lawn!

‡‡FOOTNOTE (doubble-crossssed): Aren't they handsome creatures, soccer and pies aside?
Posted by Marin (AntiM) at 5:11 AM

Labels: 2011 - The Saint vs. The Road to Perdition, Brother, Nephews, Old and Feeble

Tallest and Hairiest is taller than I remember. And cuuuuuuute.

Do you need my lecture notes on "Nature vs. Nurture"?

Which one will Kate be playing?

Ms. Winslet will be playing the role of the pie.

It's kinda the pits for an Academy Award winner.

Tallest and Hairiest is going to be taller than me soon. Not a huge accomplishment, mind you, but still... it's the end of a Tall, Hairy era.