Ketchup with the Fried and a Small Side of Pig-Lick 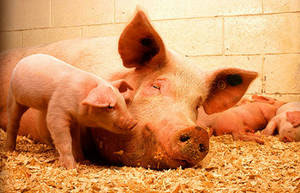 I have spent almost as much time in the last two weeks apologising for my bad communication skills† as I have actually getting anything across.

The people in the Billings office with whom I've had to coordinate on the current sale have driven me to a level of brain activity most often reserved for dog trainers and pre-school teachers.

They ignore half of what I say, all of what I ask and react to the balance as if English is not their first language.‡

On the flip side, when they ask or tell me anything, I have to ask a dozen questions to figure out what it is they actually want.

So I talk to people like they're two. And everything anyone says to me, I question and prod and refuse to take at face value.

I hate what they've done to me. I used to be a reasonable, smart girl -- albeit given to occasional gusts of breeziness -- and now I'm a paranoid fuckwit.

I'd like to take this public opportunity to apologise to those who have been on the receiving end of my complete lack of logic and warn you it's not quite over.

[SUMMARY: That's my excuse and I'm sticking with it.]

We're just getting started on the November sale.

And I'm going to Reno.

Hans... poor Hans has to go to Lusk, Wyoming, tomorrow.§ But I get to go to Reno.

On the other had, indispensable people get to go to Reno instead of Lusk. For 24 hours. And not really work.

I'm staying at a spa.

Y'all are going to miss me so much.

Tallest, Hairiest Nephew's birthday was Friday. I did, indeed, complete the Vampirates sweater in time.

This is the high fashion shot¶: 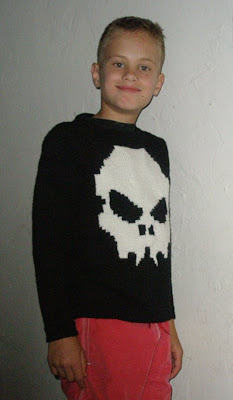 This is the edgier shot, in which THN displays both his mother's wig# and the skull itself beautifully. 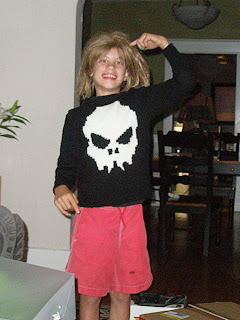 Little brothers always have to drag tag along. 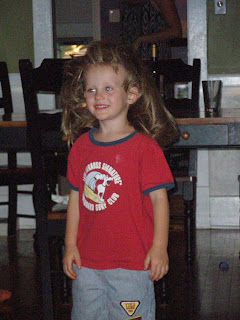 See? It was a good Friday.

Marin says: It's a floral I can't put my finger on. It blooms into something with a bitter edge, like grapefruit, but not -- maybe a bitter orange -- just the tiniest hint, leading me to chase it around my wrist like my own shadow.

It definitely rolls out and I get an immediate whiff of bark or moss, but it's fleeting and light. There's a vague fruit somewhere under there, but I can't figure out what it may be -- a sweet, chewy fruit like date or fig, not a bright apricot or citrus.

Ormonde Jayne†† says: (National Flower of the Philippines) Literally translated as "I Promise You."

Sampaquita flower is a symbol of purity and fragility, coupled with fidelity and resolve. The scent opens with an unmistakable summer bouquet,$ bursting forth with sun-kissed lychee set on a canvas of bergamot,$ grass oil and magnolia flowers in full seductive bloom. The marriage of these elements, together with a dusky floral heart of sampaquita absolute, freesia and muguet, combine to form a fusillade of fabulous intensity. An inspired quartet of base notes, musk, vetiver, moss$ and ambrette seed, unify and harmonise this sensational summer scent.

Hans says: Now that you told me, it's definitelly Filipinoish. Gotta wait for the roll-out.

Yeah, it smells like the perfume section of the Thai market; it's definitely something familiar.

"It's very different now," I said.

Yeah, it is different. Muskier. Is that a word?

"If you can use 'Filipinoish,' I'm pretty sure you can use 'muskier.' Muskier may even be in the dictionary."

‡FOOTNOTE (double-crossed): If only I had a special treat to train them with. And a cattle prod.

§FOOTNOTE (swerved): A town so unremarkable it doesn't even have its own website.

¶FOOTNOTE (paragraphed): I'm gearing up for the impending season of Top Model. Gotta get the lingo down. Meanwhile, I'd like you to marvel a little how nicely the sweater fits despite the fact that nephew is built like a phone pole and I didn't have actual measurements. Thank you.

#FOOTNOTE (pounded): I don't know why eBeth has two wigs lying around the house. I didn't ask.

††FOOTNOTE (ddouble-ccrossed): If you are the type who is interested (*cougheBethcough* *coughSylviacough* *coughRosiecough*), Ormonde Jayne offers a sampler of all ten Ormonde Jayne scents for about $60, shipped postage free from England. They're lovely... and such nice packaging!