When you get four women together, you may have a hard time getting them to agree on anything.

We all agreed there would be excellent opportunity for many, many cheesemaking puns.

Actually, we didn't disagree on anything,† so it was a pretty good day.

eBeth, Annie, Tani and I convened in Tani's excellent group-cooking kitchen to make mozzarella. We decided ahead of time to each bring a gallon of milk and make four batches of cheese.

We used whole milk for the first batch and did it all by itself, figuring if we were going to screw something up, we should probably only screw up one batch.

[SUMMARY: We are smarter than some of us look.‡] 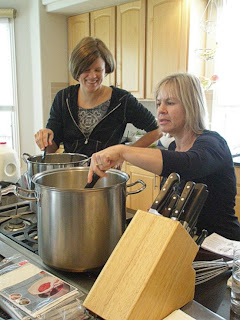 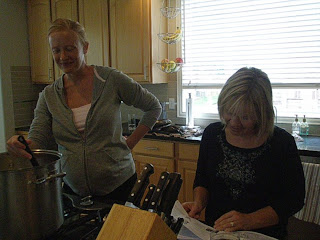 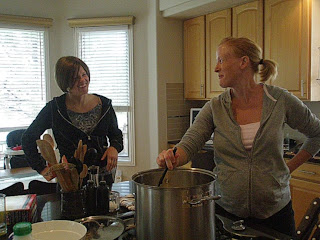 Indeed, the first batch didn't turn out all that great.§ 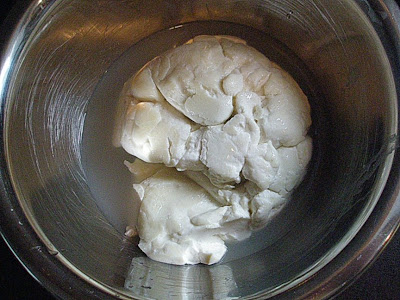 It tasted OK, but the texture left something to be desired. We took the troubleshooting notes to heart and launched into the next two batches. 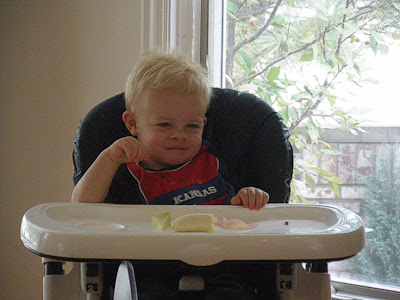 The second and third batches came out very well, except that one was fat-free¶ and fat-free cheese just sucks even if you make it yourself.

[SUMMARY: This may only surprise me.]

The right one is whey bigger than the left. Sorry... that was just cheesy. 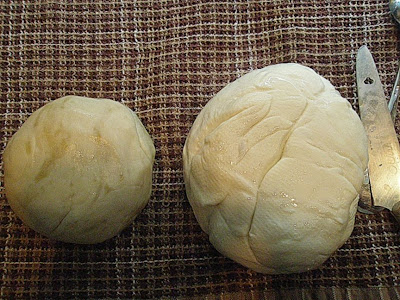 Applying all our skill and found wisdom, we launched into the last batch.

For those of you playing at home, you heat the milk with some citric acid. Once it gets to temperature, add the rennet and stir it and heat it.

Let it sit, then check to see if the whey has separated and the curd has formed.

Then you cut the cheese.#

It never o-curd to me I'd be on my whey to cutting the cheese. 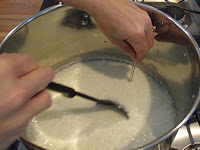 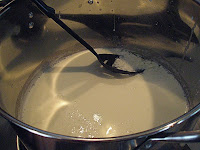 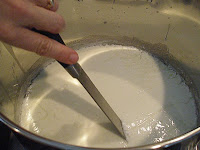 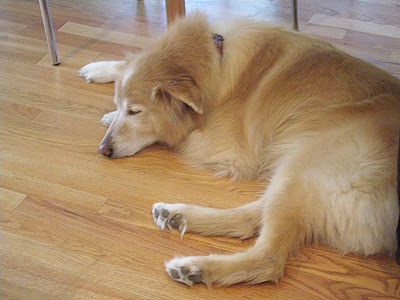 Once you cut the curds, you remove as much of the whey as possible, microwave it for a minute and *immediately* begin pulling it like taffy.††

Once it's smooth and shiny, you have cheese.‡‡ 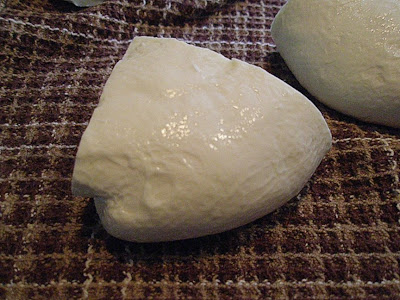 On the way home, there may be cranes. Exotic cranes in suburban locations.§§ 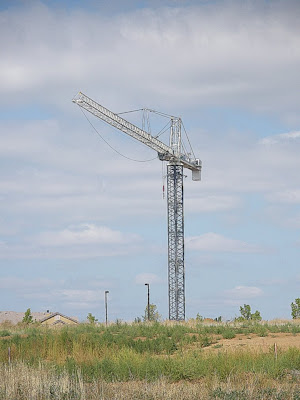 And you get home and your Broncos play a weird but exciting game, ending in a win.%

I fell short on my push ups last night. Something popped - not like I broke anything, more like I got a charlie horse in my trapezius - so I stopped. But I was only three short of the stated minimum, so I don't feel too bad.

Marin says: *sigh*¶¶ You know what this reminds me of most? Erythromicin in a bubble gum-sweet suspension I had to take when I had ear infections as a kid. It is a very pink sweet with a slightly medicinal smell behind it.

As it spread out, the medicinal smell bubbled up and it smelled a little like chlorine. We're in the neighbourhood of kool-aid and bleach.

Surprisingly, an hour later, it smelled like a florist's shop - not flowers, per se, but that cold, wet, green smell of cuttings and freon with an embroidery of crushed petals.

Hans says: It's definitely something alcohol. Gin. Well, not gin, but pine. And some sort of cleaning supply.

¶FOOTNOTE (paragraphed): The other was 2%, which was considerably better. We didn't test quite enough variables against quite enough control groups, but it appears the brand of milk may have made a difference. Tani's organic whole milk used in the first batch may also have been a victim of greater heating, which kills the bacteria needed to make cheese -- you can't use ultra-pasteurised, so it generally has to be local and not organic. Annie's fat free Royal Crest home-delivery milk exhibited symptoms not only of being fat free, but it did this weird marbling thing after it was dunked in ice water. The 2% and whole Lucerne batches were by far the best.

#FOOTNOTE (pounded): You *knew* that was coming. You would have been terribly disappointed if it didn't.

††FOOTNOTE (ddouble-ccrossed): We think part of the problem with the first batch may also have been that we took it out of the microwave, donned gloves, read instructions, THEN pulled it.

‡‡FOOTNOTE (doubble-crossssed): I left out a couple of details in the name of keeping you from falling asleep on your keyboard and typing njnnnnnnnnnnnnnnnnn with your nose.

§§FOOTNOTE (cranes twisting in the breeze): Pulled over, stopped the car, made an effort. How long has it been since you saw a crane here?

%FOOTNOTE (percented): By "you," I mean, "I." Your cheesemaking experience may be different and may not involve the Broncos at all.

¶¶FOOTNOTE (bonk bonk): Mostly because I'm stuck in a perfume rut right now. With any luck, one of the randomly-chosen scents over the next few days will perk me up and make smelling worthwhile again.

‡‡‡FOOTNOTE (double-triple-x): Don't get me started on "sexy." I just participated in a blustering, incoherent way in a discussion on the term "sexy" being applied to everything from shoes (which can be sexy, but not all of them) to tires (which can't be sexy without the aid of a distinct fetish). I'm growing tired to the point of over-sensitive of sexy meaning any level mundane goodness rather than actually sexy. Cripes... it must be time for my meds.
Posted by Marin (AntiM) at 6:05 AM