Well, Now, I'll Just Have a Little Lick Over Here 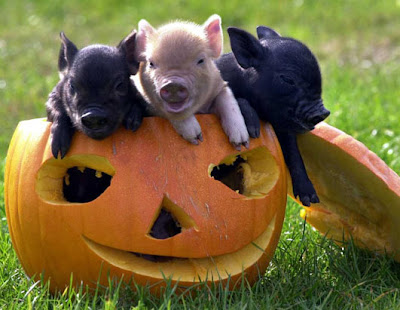 I can't believe I forgot to use these pigs on Halloween. I was so giddy over the Hersheys with Omens cartoon I flat forgot.

And I find I have a bunch of little things and nothing worth its own blogpost. That's what licking the pig is all about, my friends.

First, there was a little nudge in the comments to spill the beans on my cereal purchase. I may have been remiss in where it came from. Their contact address is in New Hampshire, the "about us" mentions sublets in NYC and the cereal came packed with wadded Boston Globes, so... east coast. Possibly New York.

Anyway, it's a company called [me] & goji† that I found through Gizmodo or Geekologie. The cereal is spectacular. I'm a cereal fan in general, but this cereal takes the cake.‡

On their website, you§ travel through a list of ingredients -- different flakes, grains, seeds, nuts, berries -- and add what you want to your cereal bowl. As each item is added, the nutritional information label on the right reflects your choices.

Then you name your cereal.¶ Then you buy your cereal. Then your cereal is hand-packed by a REALLY cute boy.# It's almost like having cabana boys. In New York. Or maybe New Hampshire.

It is, of course, a little expensive for cereal. Like lovingly hand-knit socks are a little more expensive than socks-by-the-dozen from Old Navy.††

Also? You can buy carbon offsets to ameliorate the guilt of having cereal shipped across the country.

Also? Goldenberries are really, really sour. You should get something sweet to go with them if you get goldenberries.‡‡

[SUMMARY: I have impulse control problems in so many arenas.]

Lace knitting may be the death of me. Despite my chest-pounding over being able to count on beyond four, I'm not sure that's accurate. Or maybe just not consistent.

The good news is Malabrigo Lace, despite its fuzziness, holds up pretty well through multiple froggings.

[SUMMARY: Says the voice of experience.]

Last week, a new billboard went up. I called Hans, excitedly,% and he immediately decided we should bet lunch on what the billboard would be.

Of course, I have to look at the surprisingly creepy guys§§ on the billboard until they take it down. I'm guessing since everybody finds it so creepy, this billboard is the one that will stick through the next six months.

[SUMMARY: A message of hope.]

A chocolate eyeball escaped from the Halloween candy some time within the last couple of weeks and got covered by a knitting pattern then ground into the carpet. I'm blaming it on the cat.

If anyone knows how to get chocolate out of shag carpet, let me know.

Today I wore my jacket when we went to lunch. Friday I bought a snow brush/scraper for the Cutest Little Car in the Whole Wide World. Seemingly unrelated events.

I believe they are both important steps on my campaign to become St. Marin of the Mountains, patron saint of fuzzy crack, fuzzy cats and odd sexual positions.¶¶

See, I know if I had not sweated my way through lunch today unnecessarily, if I had not purchased a $12 snow thingie, it would be cold and snowing for the rest of the winter. As it stands, I have assured my fellow citizens a pleasant Monday's lunchtime and a minimum of snow this season.

If that's not martyrdom, I don't know what is.

Unfortunately, I haven't heard a peep from the Vatican yet. How many miracles does one woman have to perform before the frickin' Vatican will take notice?

[SUMMARY: Not a theology major.]

I'm pretty sure I had more to share, but I don't know what it might have been. Hell, I gave you Terry and Chas. What more could you want from me?

Marin says: The first blast makes me want to say "lime," only it's not quite that bright -- more like one of those tough, bitter grasses that you'd nibble on when you were a kid and too young to worry about how bitter it was.

It dries down within minutes to a watery, woody, slightly citrusy smell. There's something dry and sharp in it, like pepper, but very little scent of any kind left.

I feel like I'm missing the whole lovely roll-out because it's too small to smell.

This may be the first Ormonde Jayne I'm not delighted with -- the scent itself is fine, but it's so fleeting it's best on the cuffs rather than the wrist.##

Ormonde Jayne says: (A tiny pale orange flower from India) Related to the magnolia and deemed sacred in the Indus Valley, Champaca flower absolute is a heavenly, creamy floral scent - both elegant and intimate.$ Blended with neroli and bamboo and underscored with fragrant rice and green tea notes, this is a distinguished perfume of rare beauty.

Hans says: Sour smelling, like... I almost got it... right at the end, like an herb. Just at the end.

[like lime, but not limey enough to be lime, I said]


†FOOTNOTE (crossed): Their grammar, not mine.

§FOOTNOTE (swerved): And by "you," I really mean "you," 'cause I'm guessing a solid majority of those who go check out the website won't be able to resist building their own cereal, even if they never actually order. It's like some low-tech, high-fibre video game.

¶FOOTNOTE (paragraphed): Like having kids or getting a puppy, naming rights are part of the charm. My cereals are "The Bible Tells Me So" because it had a lot of biblical grains in it and "Hopin' Sesame" because there are sesame seeds in it and I'm the biggest dork in the world.

#FOOTNOTE (pounded): Adam packed mine. He hand-signed both containers in blue Sharpie, which I think is a charming touch.

††FOOTNOTE (ddouble-ccrossed): If I speak your language, it's so much easier for you to understand.

%FOOTNOTE (percented): Excited because it was a political billboard, referencing some ballot issue we were sure we'd have to look at for months after the vote was in and counted. Not excited because they were changing the billboard. They do that about every other week.

§§FOOTNOTE (how are we going to spin this?): We have nicknamed them Terry and Chas. Chas's full name is Charles "Meatball" Thoroughbrace III. Only his mother calls him Trip and nobody's really called him Meatball anymore since Winky Bushmeyer died in '97. And if you think they're not creepy, click for big.

¶¶FOOTNOTE (heads up, Vatican City): Still working on the particulars. I figure I don't need to have it all nailed down until I make my acceptance speech. There's an awards ceremony, right?

##FOOTNOTE (reasons too numerous to number): A concept I ddn't figure out for the longest time. When perfumes evaporate too quickly, they'd apparently be better off sprayed on the clothing, which will absorb and hold them, then on the skin where they eventually wear off. At least, that's what I think it means. That's what I'm talking about, in any case.

$FOOTNOTE (on the money!): I'm counting "intimate" as "nobody can smell it now unless they're intimate with me."