Those of you up on your Marinology† may remember I play poker with the Elks‡ the night before Thanksgiving§ every year.¶

A lesson in flash photography:# 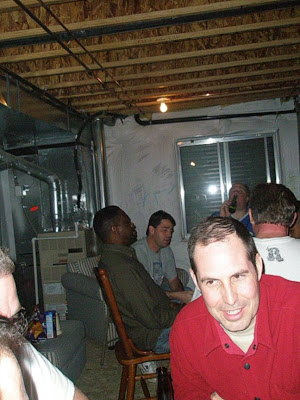 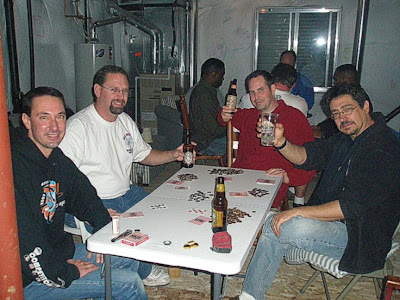 Ah, that's better. This is my table. Steve, Neal, Justice, Eric and my beer. We are about to discover -- then play -- Dongle, a totally workable, endlessly fascinating poker variation named after a computer gizmo.††

Dongle is six-card stud, threes wild, nickel ante. Every time a three comes up, everybody raise his beer and shouts a hearty "Dongle!"‡‡

A second lesson in flash photography:^ 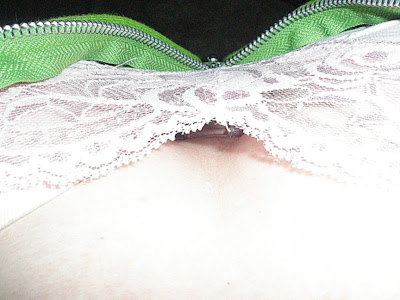 That was right after the bottle cap came from out of nowhere and lodged itself right between my breasts.§§

I'd like you to take a moment and marvel at the fact that, while I provide a relatively spacious target, Jack made that shot from waaayyyyy at the other end of the other table.%

After the ensuing chaos quieted,¶¶ a new rule was enstated: if a Dongle player gets a bottle cap thrown down his## or her shirt,††† the other players must ante a quarter each, plus foot the bill for the quarter ante for the bottle cap recipient.

Let the first game of Dongle be entered into history: 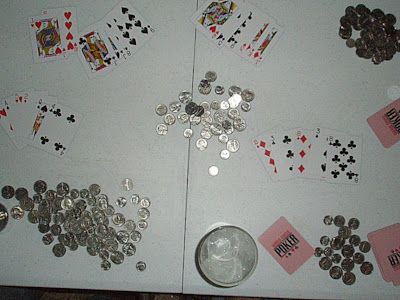 Eric started the game. Eric won. Eric is the only one who's ever won Dongle.‡‡‡

As a new dealer called a second round of Dongle, the final rule was enstated: the dealer may call one additional rule with each hand of Dongle dealt, not to be cumulative.§§§

Generally, the complexity and depth of the table talk that has led, over the years, to the insiders' use of "Astroglide," "towel boy to the crack whore" and "sterno bums!"¶¶¶ doesn't much allow for efficient re-telling.

This year, because of Dongle, I actually have a relatable story.###

Thanks be to Dongle.


†FOOTNOTE (crossed): Well, if it's not a word it should be.

‡FOOTNOTE (double-crossed): No relation. This is just my drunken guy friends, called together under the sacred chant, "My name is Matt Cook and, as usual, I am wearing no pants!"

§FOOTNOTE (swerved): Like two weeks ago. I'm on Nyquil Standard Time and didn't get to it until just now.

¶FOOTNOTE (paragraphed): Except when we don't. Like last year, when Matt took his kids to the Macy's Thanksgiving Day Parade. But that was the only year since 1983 we haven't played.

#FOOTNOTE (pounded): i.e. -- things not to do, limitations thereof.

††FOOTNOTE (ddouble-ccrossed): Eric has a friend at work that has a USB 32-bit dongle and is very excited about it. We all were too. We were so excited, we thought it sounded like a college football team: The USB mighty THIRTY-TWO BIT DONGLES! There are cheers. With hand motions.

‡‡FOOTNOTE (doubble-crossssed): It's fun! And lends itelf well to catchphrases such as, "I'm wrongle in my Dongle."

That's what she said!

§§FOOTNOTE (boobs in spaaaaace...): When you use the clinical terms, it's not nearly as twelve and I'm trying to be serious here. Dongle is serious stuff.

%FOOTNOTE (percented): Trust me, the only person more surprised than I was that I had to perform a bottlecapectomy of my boobs was Jack.

¶¶FOOTNOTE (OK, now everything looks like boobs): Girl noises, shrieking, giggling, flapping... then when we got Justice calmed down, the rest of us could enjoy the game again. *rimshot*

##FOOTNOTE (tic tac bottle cap): I maintain that if anyone gets a bottle cap down one of the guys' shirts, we should have to ante two quarters.

†††FOOTNOTE (holy holy holy): I was, of course, bombarded by bottle caps for the rest of the evening. And the other table wasn't even playing Dongle.

That's what she said!

§§§FOOTNOTE (dizzying options): It's not Calvinpoker, after all.

¶¶¶FOOTNOTE (poker faces): The phrases, not the actual objects.

###FOOTNOTE (oh, the poundings you'll take): You may not have enjoyed it as much as I have, but at least there's a beginning, middle and end to it. "Sterno bums" has no end.
Posted by Marin (AntiM) at 7:59 AM