So I went to the gym this morning...

Don't laugh. It could happen to you.

I'm finally taking advantage of the five-pack of personal training sessions I got† when I signed up with 24-Hour Fitness. In my defense,‡ it's not as bad as it sounds.

They were building the gym less than a block from my house and they put a flier on my door saying, "Join now! Pre-sale! Spectacular deals! We'll sex you up and be your slaves and clean your floors! Call now!"

And they sent me to Highlands Ranch, which, for those of you not in the know, is not quite the other side of the earth from northwest Denver, but damned close. It is close to the office though, so, y'know, I went.

And the gym across the street was supposed to open in March. I think it finally opened in mid-May, about the time of the 40 days/40 nights thing which 1) sapped my will to gym, and 2) took up a LOT of "free" time.

That's my story and I'm sticking with it.

[SUMMARY: The sun was in my eyes. Nobody told me we had a deadline. I didn't see the sign, officer.]

But I'm all jimmy§ now. And it was such a good morning for it, right after going to see Rasputina last night and staying out late-ish and indulging in a little blueberry vodka (and gallons and gallons of water, not to worry).

How was Rasputina? Glad you asked.

I love going to these shows. Two girls on cellos and one odd guy with a flask and an enormous-and-ever-increasing¶ percussion set.# Gothy. Rocky. Costumed.& Funny. Music? Outstanding! 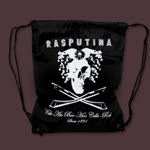 And the crowd... oh, the crowd. The standard goths, dripping mopey black haircuts into broad black eyeliner; the fey and elegant white-skinned girls with improbably-coloured hair in fitted velvet jackets and frothy white dresses; the handful of jock types with their super-coiffed fashionista†† arm candy; the emogranola kids, all goth below the waist and ill-fitting bright t-shirts above, slinging Himalayan-weave hippy messenger bags across their bodies; the row of high school geometry teachers sporting short-sleeved plaid seersucker dress shirts and implied pocket protectors; the three neo-disco goth children up front who banged their heads and made the international hand signal for devil music‡‡ the whole concert; the Art Garfunkel look-alike (smaller fro) in a black dress shirt, brown shorts and Doc Martens looking like an escapee from IBM...

[SUMMARY: The circus is in town. Come one! Come all!]

I'm not sure Red was as into it as I was, but I know she'd agree with me that the sheer pageantry of the crowd was worth the price of admission.

‡FOOTNOTE (double-crossed): Yes, I feel a little defensive. Did you catch the part where it's taken me seven months to set foot inside the gym for which I've been paying for... well, seven months?

§FOOTNOTE (swerved): I started with "gymmy," but it looked wrong. Ditto "gymmie," "gymmee" and "gymmiee." To say I'm jimmy seems kinda hip and street or something. At least like something from Heathers. It'll be very.

¶FOOTNOTE (paragraphed): We speculate that Melora (read the history if you want to know more), who seems to rule her concept with an iron fist in a barbed-wire glove and sports a rolicking revolving door of second-chair musical talent (Melora, always and ever, being first chair), has allowed the drummer to have more bits on his trees every year he manages not to piss her off enough to fire him. Or perhaps he just sneaks them on when he hopes she's not looking, in which case, she may trade him in when she figures it out. 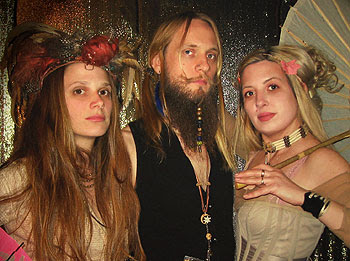 $FOOTNOTE (moneyed): OK, maybe not exactly what the designer intended, but it was clearly meant to be my knitting bag. Y'all know.

††FOOTNOTE (ddouble-ccrossed): Prompting me to sing, "One of these things is not like the other, one of these things just doesn't belong..." Of course, I was wearing olive green cargo pants and a red split-neck tshirt, so there's probably some little goth version of me blogging her heart out about the muggles that showed up on her turf last night.

‡‡FOOTNOTE (doubble-crossssed): You know. Like Beavis and Butthead. Shout at the devil. Blizzard of Oz. That shit.
Posted by Marin (AntiM) at 12:30 PM