Life and werk... so educational.

F'risntance: We† were working on an acquisition from a company that wants to focus on their own unique brand of oil exploration, which consists of drilling an 18' diameter hole 3000' down,‡ then dynamiting their way into various up-hole locations in a sort of stellate, hub-to-rim pattern, fracturing their way into local oil reservoirs.§

As someone who used to hang around guys, beer and fireworks, I'm pretty sure this is the result a drunken night amongst the engineers and a surplus of TNT.

Somebody at the seller's company drew a picture on their dry erase board: 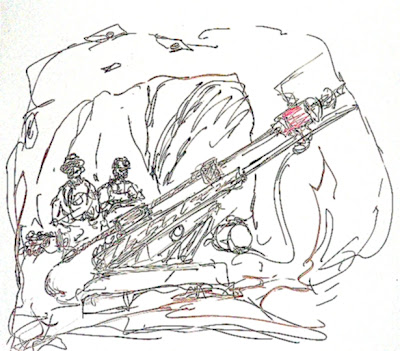 The seller's office was very nice -- they call it the IT building.¶ It has cool, I'm sure custom-made oil derricks in their grand, sweeping staircase. 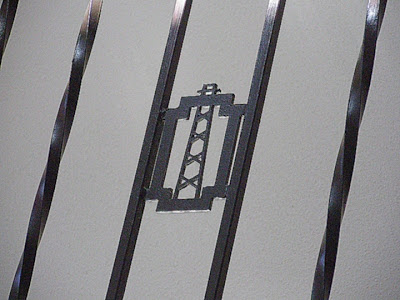 It was also entertaining, but that may just have been me.#

F'rinstance, I had a chance to closely examine a box of staples. 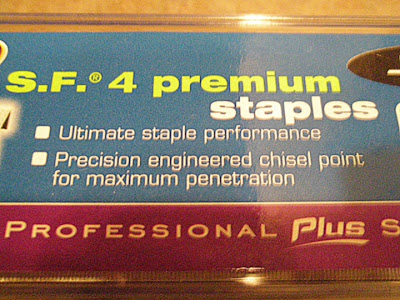 Maximum penetration? That's what she said.††

But the guarantee put the icing on the stapler cake: 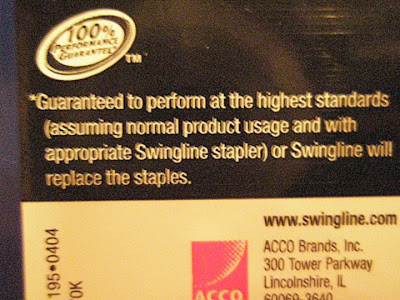 Oh, how I want to test that guarantee.

[SUMMARY: Entertainment is in the eye of the beholder.]

There is a REALLY good restaurant in Sheridan‡‡ called Oliver's Bar and Grill. I had mole quail stuffed with hominy Tuesday night.

And tortilla soup and the most architectural of salads§§ Wednesday night. And pheasant ravioli and a chocolate tower Thursday.¶¶ 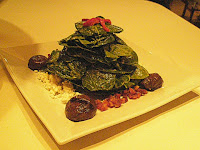 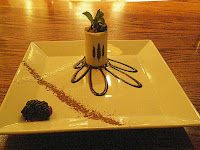 And they didn't even sneer at my photographic dorkitude.

[SUMMARY: Oliver knows which side his bread is buttered on.]

Speaking of bread... Oliver's has a wine/cheese/bread shop attached to it, so Brother and I bought four loaves of Dakota bread to take home. Carry-on bread. A lady in the seat across from us on the tiny plane couldn't put her purse in the tiny overhead compartment for fear of squishing our bread. Her purse was buckled into its own seat and our bread rode unmolested.

Sheridan, like so many Wyoming towns, has an abundance of random acts of public art. Thus: 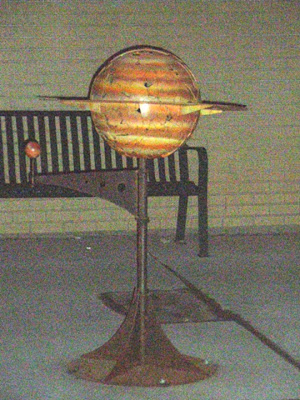 Brother rotated and revolved this, and it's a fully-interactive planet.##

Sheridan also has its fair share of Wyoming mud trucks... 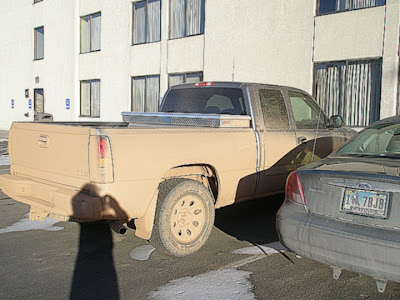 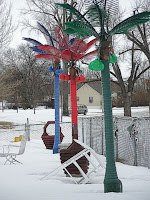 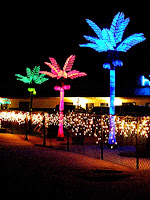 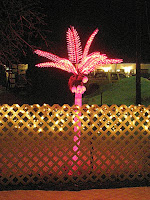 ...and a really spectacular yarn shop. 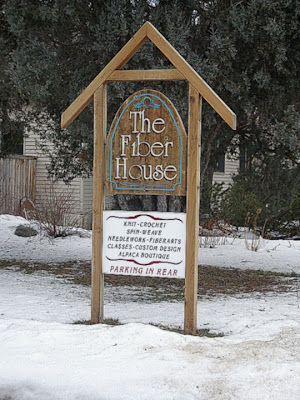 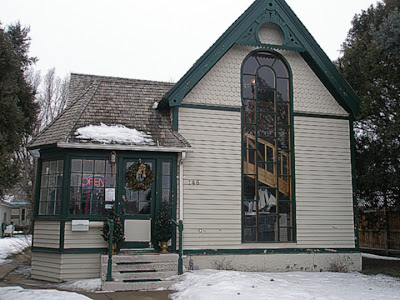 Wait, wait... you have to see how clever their logo: 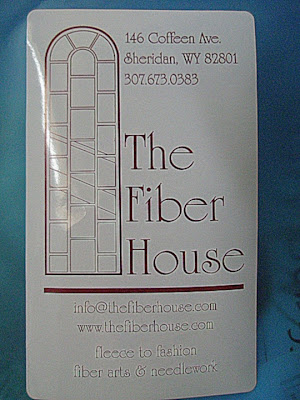 See? It looks just like the window on the shop.

I wandered around for quite some time and found a book I'd never seen before, so I got it, along with some lovely silk to possibly execute one of the designs in the book, only this is very thick-n-thin yarn and it looked wonky as hell all laced up, so I frogged it and will be making something different with the silky stuff. 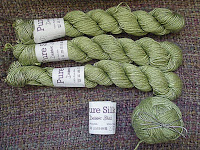 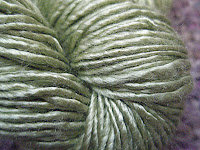 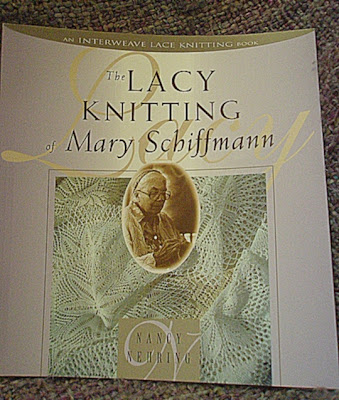 Before I leave for the day,††† I have to share an observation on Sheridan and its independent renaissance personnel:

They're there. In spades.

When I blew up the IT system at the Holiday Inn, the guy they brought in as their top-tier expert was talking to the office manager who'd tried to help me.

"Are you off after this?" she asked.

"I have to go fix a washing machine," he replied.

For some reason, I thought it was a joke, like, "Ha ha, the dolts here will probably be wasting my mad geek skillz fixing a bloody washing machine," only he was perfectly serious. Apparently, there was a valve malfunction.%

And Wednesday night at Oliver's, we overheard a guy talking to people at the table next to him. He taught dental hygienist courses part of the week and criminal justice classes the rest of the week.

Brother said, "Have you been listening to this?"

"How does that happen?"

"I don't know, but let's hope he never gets confused as to which one he's teaching. The cavity search portion of the class could be hell."

Brother pointed out I'd never, ever be able to toss that line off again. How many times are you going to run into a dental hygienist/criminologist in one person?

Where they drink this: 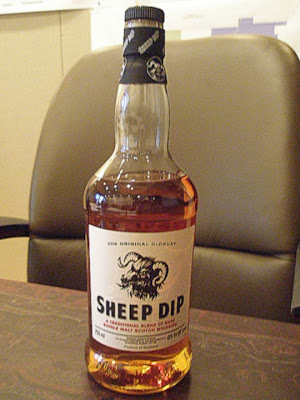 ‡FOOTNOTE (double-crossed): Don't ask. I asked. "How do they keep the dinosaur bones from falling on them?" I asked. Nobody knows.

§FOOTNOTE (swerved): Also? Don't ask what happens when you're in the bottom of the hole and the frac channel (a term I just made up, but might actually exist) starts siphoning oil into the hole around your feet. Nobody knows that either.

¶FOOTNOTE (paragraphed): Not for the reasons you may think. It stands for "Ivory Tower."

††FOOTNOTE (ddouble-ccrossed): She also said, "Excuthe me, but I think you have my thtapler" about 2011 times, because the Office Space stapler bit *never* gets old.

‡‡FOOTNOTE (doubble-crossssed): Father informs me there are several movie stars doing the back-to-the-earth thing around Sheridan, so it's not as Wyoming as it could be.

¶¶FOOTNOTE (one foot in front of the other...): For those of you scoring at home, yes, we tried no other restaurants during our stay. At least not for dinner.

##FOOTNOTE (double pounder with quarters): The little satellite you see there used to be on the right side of Saturn until Brother got 'hold of it.

†††FOOTNOTE (don't cross me again!): Seriously, dudes. I can hear crickets in the office today.

%FOOTNOTE (percentaged): ETA: in the washing machine. Possibly the computer system too.
Posted by Marin (AntiM) at 11:40 AM