All New! All Fibre!

First, I was taken out rather unceremoniously‡ in Hat Attack. At least I reached my stated goal not to go out in the first round. 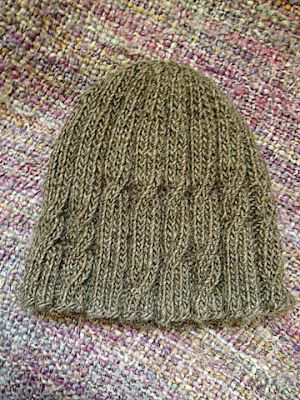 This is the hat that killed me, gleefully knit by Ravelry's llamamama. She also sent some lovely Scharfenberger's dark dark chocolate, so that helped take the sting out. Also? Cat for Scale LURVES this hat. He nuzzles and burrows and gets this dopey look on his face. I'm pretty sure the hat is 100% wool, but he's treating it the way he treats alpaca.

On the other end of the fibre spectrum, I finished a birthday present for SusieQ, intrepid manager/bartender at the Coral Room. I told her I'd like to knit her a scarf. She said she wanted rainbow and she said she's allergic to wool.

Off to Michael's and the five-pound wad of crayon-coloured acrylic!

She loves it and I have enough yarn left over to keep the nephews in stuff until they're too old for rainbows.§ 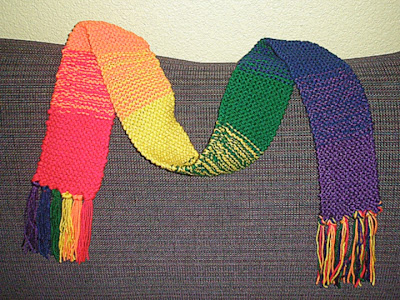 [SUMMARY: You can use cheap acrylic for good or evil. I choose good.] 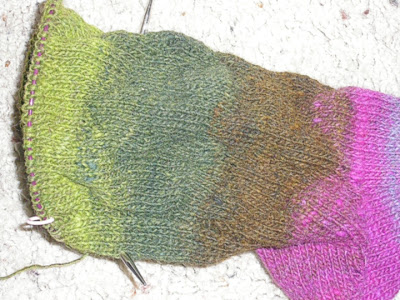 I sighed, determined maybe the colour repeats were too long or too short and frogged back to the heel, where I started knitting stockinette and simply enjoying the fading of one colour into the other.

Raise your hand if you see the problem.¶

I never switched to the other end of the ball of Noro. Like you're supposed to@ in the middle of every Lizardy pattern repeat. This is KEY in getting the Lizard Ridge to Lizard Ridge.

Ah, well. I still have the other ball of Noro sock yarn. I'll do that one right and let you know how it all goes.

Meanwhile, here's a picture of the Noro socks from a couple of weeks ago. As you can see, the colour changes are starting to catch up with each other and soon we will be able to see that the socks are not only related, but definitely from the same run of yarn. 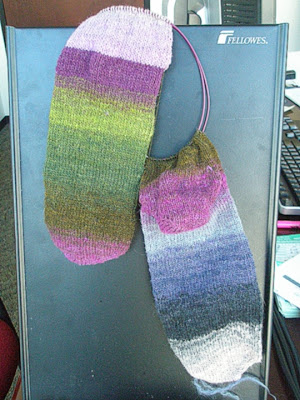 Meanwhile, back at the other socks... 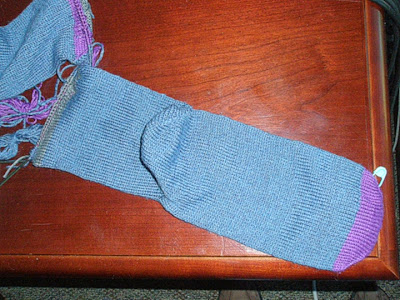 I have to admit to having dorked these as well. I've been blithely knitting long with the 80-stitch Arrrgyle pattern, not realising until a couple of days ago that each diamond is 40 stitches across and the whole pattern spans 80 stitches. Ah, well. I'm going to have to re-chart the skull and crossbones, but I don't think I'll frog the twenty rows of intarsia# to make it right.

Call it a modifcation to the design. Call it a deliberate one, if it's OK with you.

And ANOTHER dork moment in Marin's knitting: Sylvia, Grand Purveyor of Fuzzy Crack, got the Schaefer Yarn catalog and in a moment of wool fume-induced euphoria, we decided to do a Mr. Greenjeans KAL.

What we didn't know at the time was that Schaefer only dyes in batches of ten or twelve, so if you don't order ten or twelve,†† you have to wait until someone else orders enough to make a full batch.

Two months later, I was kinda climbing the walls, dreaming of my greengreengreen yarn, stroking my size 8s in eager anticipation‡‡... and I came up with a brilliant idea: Ravelry.

Surely, a plea to the Ravelers could dig up someone dying§§ to own their own collection of Rafael¶¶ yarn.

Within a couple of hours of posting my plight, Sylvia emailed to say my yarn had showed up. Apparently, they dyed so much for TNNA or Stitches or one of those big fibre fests that they could send my yarn. 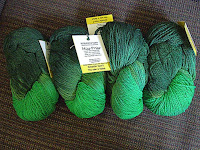 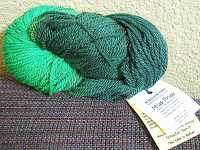 I knit a gauge swatch and found I'm getting 5 stitches to the inch instead of the 4.5 the pattern calls for. I guess it shouldn't be a surprise, since I'm apparently a tight knitter, but I've never NOT gotten gauge before. And it was on my gorgeous new Colonial rosewood needles, so I didn't want to switch needle sizes, so...

I did some math. And I had already had a little heartburn over the sizing, not quite wanting the small and not quite wanting the medium. Turns out if I knit at 5 stitches per inch and knit like I'm knitting a large, it'll come out between a medium and a small,% which seems just about perfect to me.

NOTE: Keep this little story in mind. It'll turn up again in a few minutes. You might laugh.

Friday, in the Sheridan airport, I finished "Making Money," so I cast on Greenjeans and started knitting.

I find top-down raglan construction a little magical, the way the increases line up all smooth and neat... 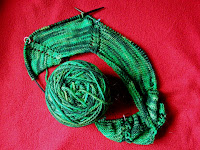 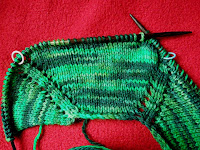 ...and, given my adventure in Maths Land, the magic of begin able to try it on before it's finished so I don't knit a whole freakin' sweater before I find out it's all wrong.

I dropped by Sylvia's on Saturday and discovered I'd done the knitting equivalent of starting in on dinner before everybody has their food. I've never been in a KAL where anybody actually AL'd. Everybody just kinda goes their own way, occasionally asking questions or sorting out pattern translation issues.

But I'm so intrigued and so stoked I can't stop. I don't knit it a lot, not obsessively, but I've added nine or ten rows to what you see here.

Sylvia gets her yarn very soon. I'm trying to be good.

[SUMMARY: I lied in the footnotes. It doesn't just sound cool, I *am* knitting to be bad.]

Let's move from WIPs to USOs,## shall we?

Partly because I'm a notorious joiner and partly because I want to learn how to do the leaves because they might fit in with a scarf I'm half-assedly designing, I ordered the Vintage sock kit. 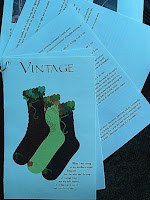 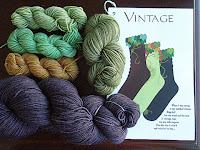 I truly love the way the pattern is printed on heavy paper, on half sheets††† and held with a ring. I'm tempted to go get the whole thing laminated to keep it pristine.

Next, I became enamoured of the Silk Ribbed Camisole from Vintage Knits, so I went in search of the perfect yarn to make my own.

I came up with this: 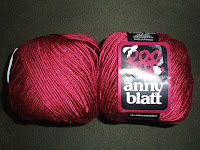 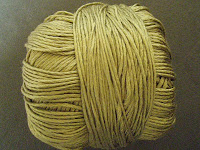 The deep, rich red -- poorly represented here -- will be edged with the mossy green. The problem? It is a completely different gauge than the yarn called for in the pattern.

For the record? The yarn called for in the pattern is discontinued. I *had* to improvise.

So I spent one night in Sheridan at the little hotel writing desk with a calculator and a notebook, revamping the pattern to (hopefully) fit the fibre.

NOTE: Keep this little story in mind. It'll turn up again in a few minutes. You might laugh.

I've never ordered from elann.com before, but I found their new collections so exciting and afordable I decided to give them a whirl to knit the monkey version of the Punk Rock Backpack‡‡‡ from Stitch 'n' Bitch for Dr. Doom's birthday. 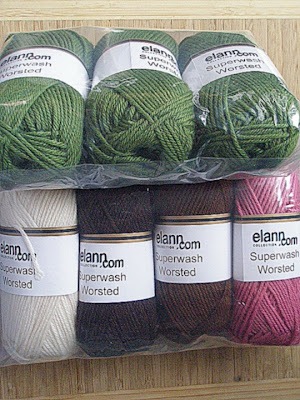 I'm a little worried the two browns aren't different enough. I guess we'll burn that bridge when we get to it.

Meanwhile, in tracking down the right yarn for Stacey for her part in the Black Valentine thingie, I ran across some Shibui sock yarn I needed. No, I didn't *want* it, I *needed* it. 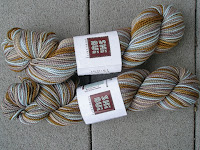 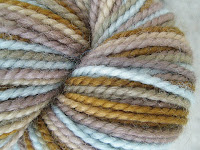 Isn't it lovely and soft and beachy? It's called Pebble, but I'm going to love it and hug it and name it George.

And I FINALLY got some Black Bunny yarn. For ages, I've been visiting every time I see Carol is updating, and I always show up a little late, when there are colours I already sort of have or only laceweight left or something.

But this time, oh, this time was special. This is a bamboo/merino sock yarn and it feels as misty soft as it looks. The colour is Bamboo Shoots and it is now named George II. 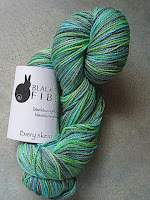 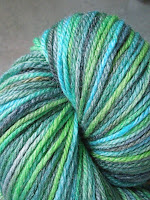 I got all turned on by Eunny Jang's Ladylike Gloves and went looking for fun yarn to knit them and came across this Habu silk. 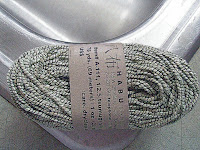 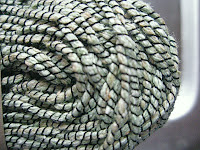 I have no idea if it will work properly, but I think it's hellacool, so I'll give it the old college try.

Last, but not least, I got this gorgeous creature at Sylvia's. It's Red Rocks Fiber Works Aspen Sock in Artichoke.

One of these^ is going to eca for *her* participation in the Black Valentine thingie. 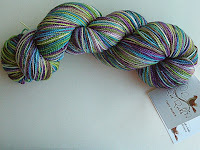 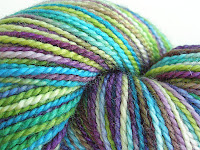 I've been waiting for something good for the Waterfall Sock pattern I bought from Knit Spot last summer, and I think this is it.

[SUMMARY: Superconsumer! Just doing my part to boost our flagging economy! Just wait 'til the dyes come in this week!]

Now, let's chat a little about my sudden surge into the world of mathematics and knitting.

WHAT THE HELL DO I THINK I'M DOING? Do we remember who we are talking about? Little-miss-can't-count-to-four wants to re-size whole patterns? I fear a fiery, fiery crash is in the offing.

You wanna know something funny? I was invited to join a Ravelry group called Woolly Thoughts Fans, dedicated to geeky mathematical knitting pursuits (pis, Fibonaccis, etc). It's kinda like when I get penis enlargement offers and I wonder who these people have been talking to that I'm on their mailing list.

And I'll let y'all know how that all goes.


†FOOTNOTE (crossed): OK, not really, but I like the way it sounds.

‡FOOTNOTE (double-crossed): Mostly 'cause I was in Sheridan. Y'all know if I'd gone to the mailbox last Wednesday and found a hat, there would have been... lots of words. Plenty of ceremony. Histrionics.

§FOOTNOTE (swerved): Ooooh... dagger through the heart! Maybe one will be gay and will never completely outgrow rainbows.

¶FOOTNOTE (paragraphed): Stacey, I'm pretty sure this is the point where you call me a hot mess and I can do naught but agree.

#FOOTNOTE (pounded): Yeah, this picture is a couple of weeks old too. I've been thinking of you guys for weeks and setting up to give you knit-it-and-make-it-all-better.

§§FOOTNOTE (wound up like a skein of sock yarn): No pun intended. OK, maybe a little.

¶¶FOOTNOTE (gophers): It was in the kids' yarn section, so I think it's probably named after the Teenage Mutant Ninja Turtle.

†††FOOTNOTE (cross my blog and hope to dye): I fold all my patterns in half anyway.

^FOOTNOTE (careted): Yes, I bought two. I'd already named mine George III... how could I let it go?