Best Fishes and Many Tanks

First, let me tell you of knitting a fish.†

Later, I will speak of Casa Bonita.

This is the Deep Sea Angler Fish by Hansi Singh. 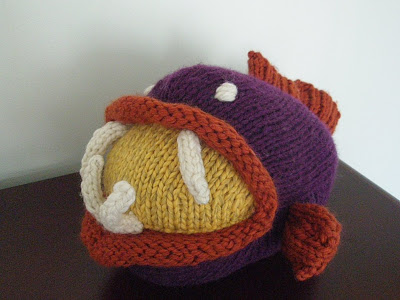 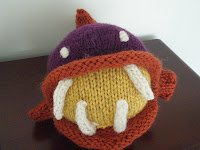 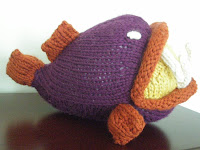 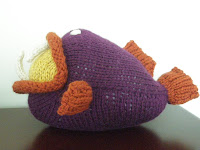 In the spirit of never leaving well enough alone, when I knit the original angler fish, it was roughly the same colours Hansi uses in her model fish. It was also worsted weight and somewhere between baseball- and softball-sized.

Not appropriate at all for a Dr. Doom gift, particularly for a birthday as important as *FIVE*.

[SUMMARY: We have high and specific standards here at the Rickety Blog.]

So I poked around and found Cascade Lana Grande, which is roughly three times the size of Cascade 220 and far more likely to reach the football-sized range I was hoping for.

From cast-on to the mad, sniffling, swearing,§ praying¶ removal of the lure,# it took me about seven hours. Most of the things that seemed intimidating and fiddly when I read through the pattern turned out to be relatively painless and stitch-by-stitch.††

I kinda love this fish.

Let's all take a moment to thank the Holy Cats and the FSM for kids who really appreciate knitting.

Anyway, it was a hit and we'll talk about Casa Bonita tomorrow.§§ On the tragic weekiversary.¶¶

‡FOOTNOTE (double-crossed): Not for some benthic creature snuffling along the dark ocean floor, in any case. Also? Doesn't the full frontal fish look a little like the Ferrari from the other day?

§FOOTNOTE (swerved): See, the pipe cleaner that held the lure up so fetchingly in the worsted weight version didn't work so well in mega-thick yarn. The lure kept flopping over his eyes like Martha Stewart's bangs. I whip-stitched a spine along the back of the lure to stiffen it up (heheheh). No go. I sewed increasingly intricate, tight and architectural anchors from the lure to the fish. Still no go. About two minutes into the lurectomy, I was nearly in tears and spitting profanity, afraid I was going to accidentally steek the fish on the eve of the Big Birthday.

¶FOOTNOTE (paragraphed): Even if you're not a saint-in-waiting, any kind of steeking -- particularly *accidental* steeking -- calls for prayer.

#FOOTNOTE (pounded): Somewhere in the fight to get the lure to straighten up and fly right, a nagging doubt that had been niggling at the back of my mind kicked in: when my mom was in grade school, she had a friend who left a wire hanger on her bed, rolled over on it in the middle of the night and poked her own eye out. This has left me with a healthy (I can hear you snickering) fear of wire in things that might be slept with or rolled upon. So, really, I was just as happy not having wires on Dr. Dooms fish, only by the time I came to that conclusion, I had a diabolical web of anchor stitches and a real fear of inadvertently steeking the fish.

‡‡FOOTNOTE (doubble-crossssed): He even put down his glow-in-the-dark, LED-lighted pirate sword long enough to give it a good squish.

§§FOOTNOTE (just a little dizzy): All this sitting up has depleted my fever-soaked constitution.