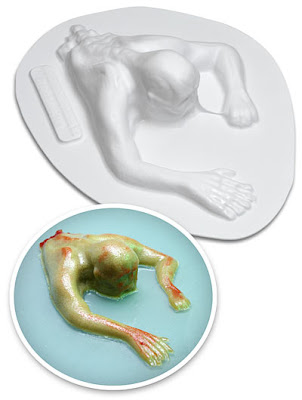 From ThinkGeek, the people who brought you† the Bone Chillers skull and crossbone ice tray, comes the Crawling Zombie Torso Gelatin Mold.

How much do you want to make Zombie-shaped JellO shots right now?‡

The backstory: Six Scents: Series One@ is a collection of six fragrances featuring collaborations between perfumers and fashion designers. An undisclosed portion of the proceeds will go to Designers Against AIDS (DAA) International AIDS Awareness Education Center in Antwerp, originally scheduled to open in December of 2008, but re-set for some time in 2009.

I have procured dollops of all six scents%... do you sense a theme emerging?^

Marin says: Sharp, bitter orange or maybe lime, then it morphs into pine, with a dry something behind it -- like a cedar branch, needles and all. A whiff of lemon lolls in the middle of it, surprisingly similar to the pine.§

There's a definite strata of fresh, white flowers solidly behind, and I would swear I'm getting fig or currant or some other dark, elusive fruit.

As the brighter notes fade off -- and they don't really fade so much as mellow -- a warmer, rounder something flirts with the composition. The floral starts looking like a spicy carnation,¶ just warming from the florist's fridge,# pine still singing in the chorus.

Now, I don't exactly smell amber, sandalwood or musk, but there's definitely something from that classic family. Apparently nothing too loud. Through it all, that cedary dryness just reining it in and making it a bit mysterious.

I think this is a very well-crafted perfume, cohesive, slightly unusual and mischeviously elegant. I like it.

Six Scents says: "The inspiration for this fragrance was driven by the way that Alexandre creates fashion. The creative liberty he uses to design fashion which can be used equally by men or women. This fragrance can be worn at any time, for any occasion, as a form of self expression, to be daring, or simply for the pure pleasure of wearing a fragrance. The Alexandre Herchcovitch scent evokes freedom ad sensuality, and similar to his fashion, the perfume is striking, emblematic and tanscends categories." - Joachim Correll, Perfumer


†FOOTNOTE (crossed): Well, brought me in any case. Left it right on my doorstep.

‡FOOTNOTE (double-crossed): I am looking at you, Lyda Kay.

@FOOTNOTE (atted): Presumably, they are planning on a Series Two.

%FOOTNOTE (percented): Due in no small measure to the (continuing) bad influence of one Nathan Branch.

^FOOTNOTE (careted): We're all about the themes here at the Rickety Blog.

§FOOTNOTE (swerved): Juno dropped some fine science on me the other day proving lemon and pine have more in common than household cleaners, but if I had the energy to go dig that up, I'd have the energy to write a real post.

¶FOOTNOTE (paragraphed): For those of you who don't troll the perfume blogs, carnation IS spicy. It's kinda like freesia or some other distinct white flower with a touch of clove and maybe a hint of cinnamon. Next time you're going past the 12-for-$2.99 bucket in the supermarket floral department, stop, close your eyes and give the carnations a good, deep, thoughtful sniff. Nobody will point and laugh.

#FOOTNOTE (pounded): I believe I've already relayed this olfactory trigger, but my sophomore year in college, my mom sent me a giant Christmas floral arrangement that had roses, carnatios and pine boughs. That's exactly where I get stuck with anything that has both pine and flowers.

††FOOTNOTE (ddouble-ccrossed): Which has to do with erosion rather than sex. I know. I learned about erogenous sinclines during a roadside geology lesson with my dad and have never quite forgiven the geologic world for that not being even half as lustful as it sounds.

§§FOOTNOTE (double sniff - like a double take, only with your nose): Ahhhh. This is why I try really hard to never look at the notes or the perfumers hype before I do my review. I would have TOTALLY gotten green apple (or green, apple) through the power of suggestion. Funny how much lemon and pine smells like green apple. Srsly.
Posted by Marin (AntiM) at 10:46 AM