Can I Get Some Glitter?

Remember a hundred years ago when I was talking about the Glam Rock swap?

I completed my mystery project, received my package, went on to live my life, invented no-run pantyhose, revolutionised modern hair care, became a spokeswoman for the plight of bookstore customers worldwide and died at the age of 102† with a smile on my face.

Seriously, it's been awhile. A couple of weeks at least. But, y'know... the camera, the uploading, the same old story. 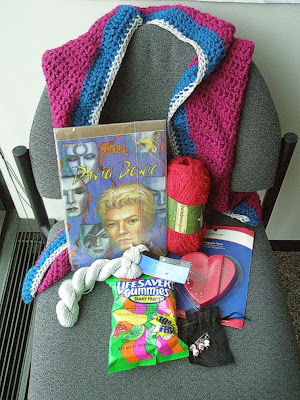 Let's get a close-up of those stitch markers: 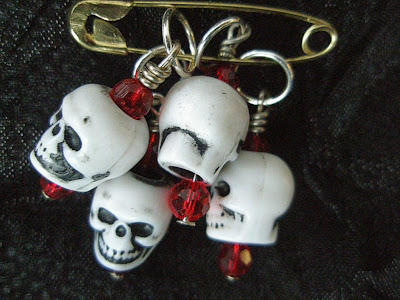 I don't know how glam skulls are, but they're certainly *me* and I believe that's what counts.§

How cool is this? 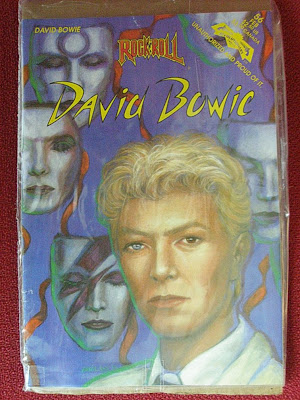 It has a full Bowie bio between its shiny, shiny covers.

[SUMMARY: If it has David Bowie, it must be cool.¶]

Now for the tooting-my-own-horn portion of the program.#

[SUMMARY: If you don't remember, I'll remind you.]

Quick side trip to the back story††: You know how there are things that follow you? Like you have some sort of pre-destined meeting‡‡ with this... thing?

F'rinstance: a month or so ago, Juno asked how close I live to North Boulder because Dawn Spencer Hurwitz, a perfumer, has her shop there. I'd never heard of DSH, but within three days of Juno's inquiry, Chandler Burr reviewed her, I saw an ad for her, Nathan may have mentioned her... it was like she was haunting me.§§

Well, I had a similar series of events surrounding Klaus Nomi. A few years ago, I got my brother "The Nomi Song" for Christmas, part of a series of odd and/or interesting gifts we have exchanged. When I got it, I was only vaguely aware of Klaus Nomi, and then only as one of the first celebrities to die of AIDS.

Brother watched the film then passed it on to me. Turns out Nomi was an artist of some merit and a character worth filing in the brain, if for nothing else, for his glam¶¶ persona.

[SUMMARY: KNMI: All Klaus Nomi, all the time.] 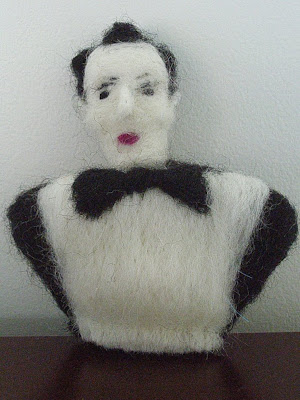 This action appears to have exorcised Klaus Nomi's ghost. Who knew he was just hanging around waiting to be immortalised in wool so his soul could rest?


†FOOTNOTE (crossed): Marin the Math Wizard would like to acknowledge that if she told you about the glam rock swap a hundred years ago, she was probably at *least* 141 when she died.

‡FOOTNOTE (double-crossed): The scarf is all glammy teal and fuschia and silver... but it looks like a Colorado Avalanche scarf to me. I'm pretty sure hockey isn't glam, so I'm pretty sure that's not what my upstream swap partner meant.

§FOOTNOTE (swerved): Being, as I am, the cente of my own universe.

¶FOOTNOTE (paragraphed): Rule of Cool #9 (right below sunglasses and right above an Eames chair).

#FOOTNOTE (pounded): I have not yet decided if I want to continue tooting my own horn because nobody gets the job done quite like I do, or if I'm sick and tired of tooting my own horn and want an experienced horn-tooter to toot my horn for me. Wait... what were we talking about?

††FOOTNOTE (ddouble-ccrossed): What your people call "tangent," my people call "side story." I was just channelling the Land O' Lakes chick, in case that didn't come across.

‡‡FOOTNOTE (doubble-crossssed): I *really* wanted to reference the story where the wealthy Indian merchant hears that Death is coming to his house, so he gets on his horse and rides to [city in India] to cheat Death, only Death shows up at his house and when the servants tell him the merchant isn't there, Death says, "Oh, that's alright. I'll see him tomorrow. We have a meeting in [city in Inda], and the story's title is "Meeting in [city in India]," only I can't remember the name of the city and Google isn't much help in this case and if ANYBODY knows what the hell I'm talking about, please give me the title in the comments because it's driving me mad and I may not sleep until I get the answer.

§§FOOTNOTE (twisty tales): Unlike Klaus Nomi, who was always a little outside the box, Dawn Spencer Hurwitz was easy to appease -- a little VISA magic and some Mini bonding and her spirit rested.

¶¶FOOTNOTE (space age antennae?): I don't mean in the Vogue/W Magazine sense or in the 80s hair band sense. I mean in the David Bowie-Gary Giltter-Tommy Bolen sense.

##FOOTNOTE (that's me, pounding my head on the desk trying to dislodge clever thoughts): I honestly have no memory of what this footnote was going to be. Bet it was clever. And funny. ETA: GOT IT! I was going to say something about how commenting with slightly obscure references is why one files such bits away. The irony is not lost on me.

†††FOOTNOTE (hot cross Klaus): If I were a better photographer, you could see the prominent cheekbones and the sharp, slightly upturned nose.
Posted by Marin (AntiM) at 6:28 AM