The Greatest Show on Earth%

I have a Finished Object.†

Remember how yesterday I said, "My camera is clear"? Well, right after I posted that, I went and mucked it up again with said Finished Object. Basically, the point of this paragraph is that I want credit for the FO, but I don't want to have to wait until I get it out of my camera and *show* it to you.‡

[SUMMARY: This is the problem with American society today.]

I do have a couple of works in progress I can share with you.

In the ongoing three-ring circus that is my knitting whimsy, I have started the Six-at-Once sock project.§ 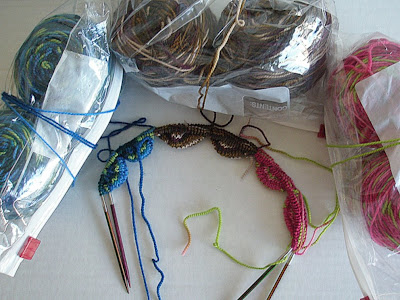 Before I even cast on, I realised the biggest pain in my ass was likely to be skein maintenance,¶ rather than any issues of technique or pattern.#

Kris, the best thing that's happened in my knitting world since circular needles,†† suggested putting each pair of skeins in its own Ziploc bag, cutting the corners out of the bottoms to feed the yarn, then untwisting as needed.‡‡

[SUMMARY: Kris completes me. Well, my half-a-mind, in any case. I come up with the wild-ass schemes. She tells me how to actually do them.]

You may recall that the Four-at-Once project encompassed two pairs of socks of the same yarn with two different sizes.

This time, I am using the same breed of yarn for each sock,¶¶ all three pairs of socks the same size,## but with three different patterns, all from Carol Jean's "Knitting Socks with Handpainted Yarn". 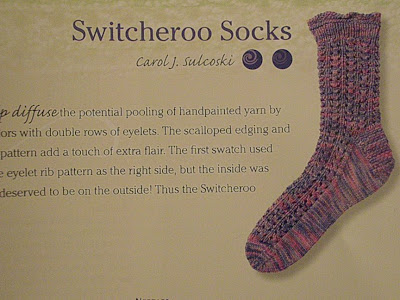 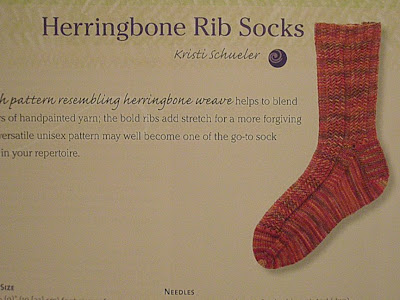 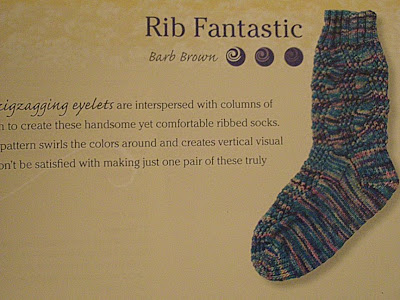 I'll update when I turn the heels and they cease to be dick warmers.‡‡‡

For my next trick, I will be needle felting.

The backstory: Brother and eBeth have made presidential candidate ornaments for the family Christmas exchange at least once. This, we feel, qualifies as a tradition.

So when Brother was grumbling about what he was going to do for this year's family gathering, I offered up a Barack Obama needle felting kit I got at Fancy Tiger during the DNC.

Not only did he make it, he deemed it the most he's enjoyed a Christmas project in years. 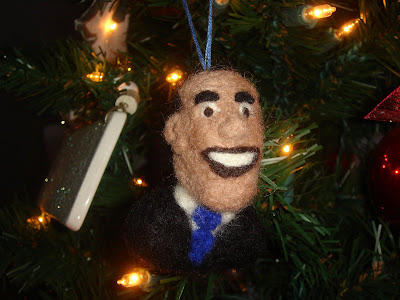 
So in trying to find a suitable handmade gift for the Glam Rock swap,¶¶¶ I took a page from Brother's book and decided to make a needle felted person from the following materials. Note the glitter: 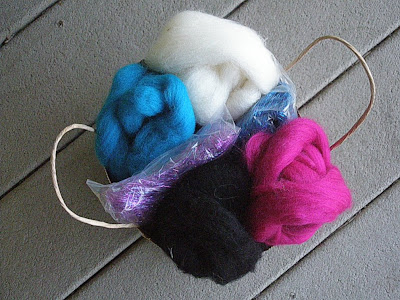 Yeah, I'm being a little cagey about who it is. Partly because I'm toying with the idea of offering a prize### to the first person who can Name That Rock Star and partly because if it doesn't work out, maybe it'll look enough like someone else that I can pass it off.


%FOOTNOTE (percented): This is not nearly as bragadocious (is that a word?) as it sounds. I'm merely trying to convey the circus-like atmosphere surrounding today's offering of projects.

†FOOTNOTE (crossed): You are so excited.

‡FOOTNOTE (double-crossed): Is this any kind of behaviour for someone who wants to be promoted to saint?

§FOOTNOTE (swerved): I took this picture on Sunday morning (pre Jello shot). Since then, I have finished the toes and done two rounds of pattern on each sock. Yay, me.

¶FOOTNOTE (paragraphed): I say, "realised," like I had a brilliant idea. Actually, it's muscle memory from the last time, when keeping four balls of yarn under control was by far the hardest part of the project.

#FOOTNOTE (pounded): It's been well established I think there isn't a technique I can't do or a pattern I can't master. I'm going to be found strangled by my own knitting someday.

††FOOTNOTE (ddouble-ccrossed): Kris found me the right yarn when I was paralysed by indecision in the Noro department at Posh. The Chypre Scarf might have been clown barf without her.

‡‡FOOTNOTE (doubble-crossssed): I can't help thinking I should've been able to come up with that on my own.

¶¶FOOTNOTE (that's only two; I scoff at two socks): Shibui Sock in Orchid, Earth and Marine. I had no idea I'd gone so... tree hugger with my colourways.

##FOOTNOTE (it's all in the numbers, baby): That would be me-sized. We'll see if I finally get a pair of handknit socks (or three) to call my own.

†††FOOTNOTE (put three feet in front of the other three): I feel I'm selling it short just calling it "pink." Maybe !!!PINK!!! is more apt.

‡‡‡FOOTNOTE (barbellous): I wonder how many more times I get to use that before Brother starts demanding royalties.

¶¶¶FOOTNOTE (one half of one big sock project!): I know. I'm a sucker for some of these swaps.

###FOOTNOTE (I got your number): Like your very own handmade rock star.
Posted by Marin (AntiM) at 6:04 AM