OK, she makes a hell of a pumpkin bread too, but for our purposes here today, she knits, she drinks.

Sarah looks at a lace pattern and says, "I don't think Row 17 is right. Here, look at this. What do you think?"†

Sarah executed the most spectacular graft on a lace shrug... it was invisible. A thing of surpassing beauty.

I did once see Sarah turn a heel, try the sock on and find the heel was sticking out of her ankle, but it only served to humanise her.

Anyway, it was Sarah's influence and connection% that led us to mingle with the pretty people in a trendy, trendy gallery, tasting pinot noir under the auspices of The Bacchanalian Society of Denver and charity work.^

We tasted so much pinot noir for so long... well, we *started* with good technique and thoughtful commentary:

"Good legs, the colour is excellent. The bouquet... grass? Definitely fresh and green."

"You can taste the grass in the finish. It starts with banana, but it's a little smoky."

Our team... Kate and Genius Sarah 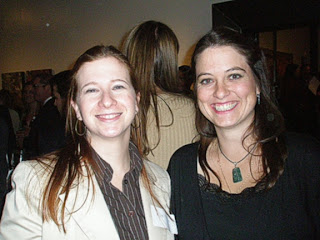 Did I mention it was a competition?

Each team brought three bottles (all the same) of a pinot noir. Two bottles from each team were brown-bagged, assigned a number and placed on tables. We had sheets with numbered spaces to write down our impression of each wine we tasted and rate it on a scale of one to five.§

At the end of the night, we were to put our favourite and least favourite on a card. The team with the best wine, as voted by the somewhat inebriated constituents, would take all those third bottles home.

Except the worst wine. The team with the most votes for least favourite¶ was to take their own bad bottle home.

We got there and signed in and partook of the "starter wines" at the buffet table. There was bread and cheese and veggies and such.

Perhaps we should have partook of more bread and cheese and less starter wine.

Anyway, at 6:30-ish, they started the speeches. Seven of them. One guy spoke twice.

One thing I might tell the committee is that seven speeches is too many.

Also, that they could have done the speeches during the mingle hour and just let us taste the damned wine at the appointed damned wine tasting time.

Also, that starter wines might not be a good idea if you're going to give people an hour's head start. 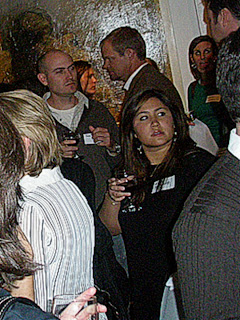 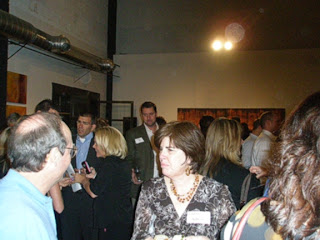 There were seven or eight tables and each table had two bottles each of ten or twelve wines.

Don't try the math. It will make your eyes bleed.

Now, if I were to tell the committee something else, it would be that palate cleansers, for both the mouth and nose, should be on every table.

Also, there should be water available for rinsing glasses. 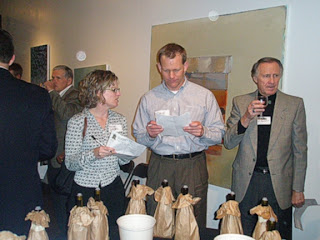 You may wonder why I have a picture of Dave here. Dave is a regular for brunch at the Coral. It was kind of odd to see him out of context. We smiled, nodded, said hello... and a little while later, Dave said, "Hey, every time I see you, you have a glass in your hand. Do you have a drinking problem?"

"Dave, I have no problem whatsoever drinking."

Oh, how we laughed.

After umpteen sips of wine with thoughtful commentary, we started to devolve to "Wine bad. Lights pretty."

If I were going to tell the committee one more thing, it would be that 80 wines to taste is simply too many. Both from a quality-of-tasting standpoint and a drunk-off-my-ass-one-sip-at-a-time standpoint.

[SUMMARY: I have no solutions, only problems.] 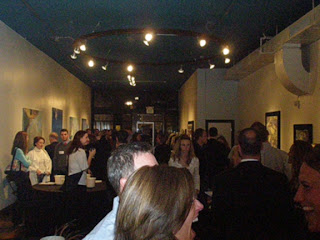 Adam joined us and asked which wines we liked and didn't like. Funny story, that.

I showed him the sheet where we'd†† written "Bad bad bad bad bad!" and given wine number 50 a negative one.

We left shortly thereafter, off to The Hornet for to soak up some wine. On our way out, Adam said, "Do you guys know which bottle was yours?"

Oh, yeah. We brought the swill.

[SUMMARY: Justice is blind. So is an amateur sommelier.§§]

Adam laughed at us because we all rated our wine the worst.

Funny thing,¶¶ I just looked at the results, and our wine got six votes for favourite. Guess how many for least favourite?

[SUMMARY: Three is a number I can count to.]


†FOOTNOTE (crossed): And I, who can't count to four, look at the pattern and go, "Huh." I know I'm slurping Sarah pretty hard here, but it's a good opportunity to pay homage to the genius that is Sarah and also say nice things about the person who sat next to me for just about every game of the baseball postseason.

Let us not talk of the baseball postseason again.

%FOOTNOTE (percented): Most specifically her brother, Adam, who is very cute and very personable and I can't believe I didn't get a picture of him. He might have popped up after pinot number 38 when I was waving the camera in the air hoping to catch good pictures like flies in a spider web.

^FOOTNOTE (careted): Please... drinking for charity? This is a concept I can so get behind. If anybody hears about a Boinking Without Borders event, let me know.

‡FOOTNOTE (double-crossed): They had the owner of a chi-chi wine store (Paul, nice guy, asked my opinion, Paul is my new best friend) go over the proper protocol for wine tasting, being the four S's, which I think were see, swirl, smell and sip. Can you see where this is going?

I turned to Sarah and said, "They forgot the most important S."

Oh, how we laughed.

§FOOTNOTE (swerved): It should perhaps be noted that at one point, I was deemed the responsible secretary of the group, as both Sarah and Kate had lost their sheets. It should also be noted I used a one to ten scale. With decimals. Pretty fancy for someone who can't count to four, huh?

¶FOOTNOTE (paragraphed): "...most votes... least favourite..." Did anybody else just get dizzy?

#FOOTNOTE (pounded): And, Allie, I love your boy Emmett, but last night he told Steve Young and Stuart Scott not to count out the Houstan Texans, as they are still a "fordable" team. I rewound it three times to be sure. I know he meant "formidable," but I'm pretty sure he ended up saying they're shallow and easy to get around.

‡‡FOOTNOTE (doubble-crossssed): You could play the theme from Jaws here. It would not be inappropriate.

§§FOOTNOTE (sssssssssssssss): Let's say, for my sake, that was clever. Yeah, I don't know what it means either. Apparently is better to sound good than to make sense, darling.

¶¶FOOTNOTE (pppppppppppp): That's a lot of funny things, isn't it? It's a funny ol' world.
Posted by Marin (AntiM) at 7:40 AM