I finally got the camera together with the computer.† While there are still no knitting pictures, I find the meeting of the electronics a good thing. If nothing else, it means I am not a complete technoloser for the twelfth day running.

[SUMMARY: I have a camera and I know how to use it.]

I learned last week there is more than one way to skin a cat,‡ billboard-wise.§

Just across the street, west of the last billboard lesson, we saw this: 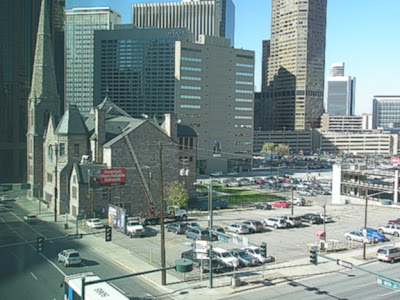 See, sometimes you just have to pop the old billboard off en toto, then snap the new one in its place. 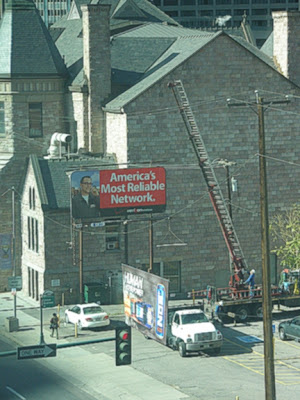 You must always use a crane.

Last week, they also started putting up holiday lights downtown at the Pavilions. This guy is on a little crane. I kinda want him. 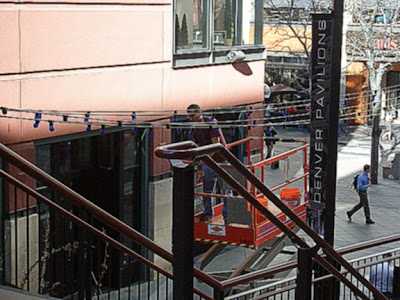 [SUMMARY: Everything is well-hung with a crane.]

Saturday, Kelley and I had an extravaganza of extravigant proportions.

We had brunch at the Coral Room, shopped 32nd Street, headed to Cherry Creek, where I took this picture from the top of the parking garage, which is where we had to park because the mall was for some unknown reason busier than Christmastime: 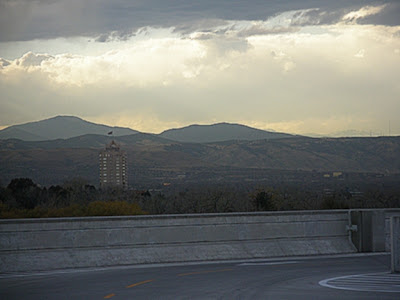 We visited Nordstrom and Urban Outfitter, then down South Broadway to look at cute, cheap shoes and sex toys.

Sex toys wasn't on our original list of things to do, but we were so close to The Crypt, we figured we'd better pop in and see what's the ups in fine leather accoutrement.

I hipped Kelley to pony play.¶ She's so happy to have me as a friend.

[SUMMARY: The more you know! {stars and rainbows}%]

We headed home for a little nap break before her friends Aaron and Stacy picked us up to go to Central City to lose some money.

I'm not much of a gambler. I find it boring, mostly because I've had the good fortune to never win. See, people who win are likely to get hooked looking for that *next* win. I just plugged a twenty in the video poker machine and played it for a couple of hours, lost it and quit.

But that's not the fun part. The fun part is that Aaron particularly wanted Kelley to bring a friend because he's trying to hook up with Stacy# and he wanted Kelley to be able to make herself scarce without making it too obvious that was what she was doing.††

Stacy turned Aaron down flat, so he decided to blaze up on our way out.@

"You guys mind if I smoke?"

Being not morally opposed to pot, and knowing many fully functional stoners,‡‡ I told him to go right ahead. I figured he'd take a couple of hits for the road and mellow out.

He smoked all. the. way. home. An hour-and-a-half in traffic.

I don't mind if people suck on the herb, but the smell nauseates me. And Aaron, in his role as my driver, was starting to worry me vis-a-vis his impairment level.

It was a long ride down the mountain.

[SUMMARY: OK, not in high school. Old and un-cool.]

When we got home, Kel and I went to the Coral Room to see Favourite Bartender.

Sunday, we met for brunch again, as it was Miss Kris's last day (we didn't know that until Saturday) and we had to say goodbye.

Then Bag Lady Kathryn and I went to Old Navy, where I bought a whole new wardrobe and did some Christmas shopping and took care of a baby shower gift. I really would have liked to have knitted something for the tot, but I don't think I have time. Maybe a hat.

[SUMMARY: Knitting! I talked about knitting!]

Now let me tell you about the boys of my weekend.

Saturday, The Boy¶¶ showed up at brunch. He tapped me on the shoulder, gave me a friendly little rub on the back, then sat down next to me. I have a firm policy of giving back to people pretty much what they give me, so I was pleasant.

When we left, Kel said, "I don't know what that was all about. I didn't invite him or anything."^

Later, I turned to Kelley and said, "Hey, The Boy sat next to me. He always sits next to you. Even when we were together, he sat next to you instead of me."

At the Coral## that night, The Waiter came in. Now, I don't know if I told y'all about The Waiter, but one night after a girls' night out, we hooked up.& We hooked up a couple of times, but with his schedule, he was wont to call at 3:00 on Wednesday morning, so it just kind of faded out.

He showed up right at bar close Saturday night when Kelley and I were the only people in with Favourite Bartender. He grabbed a beer and kissed my hand††† and sat and talked with us for awhile. At one point, Favourite Bartender asked, "How's your wife?"

And when we all left, Favourite Bartender said, "Tell the wife I said hi."

And when I got home, I called Kel, "How long has The Waiter been married?"

I shake my head.$

The Boy came to brunch on Sunday and was nice.

I haven't heard from Soldier Boy since last Tuesday.

There. Now you know as much about my love life as I do.

I didn't get very good photos, but I was cleaning the pile of books‡‡‡ from beside my bed.§§§ I was on my hands and knees,¶¶¶ pulling some escapees from under the dust ruffle, when I heard mad scrambling from over my head. I popped up to find the cat had found the best kitty toy EVER. 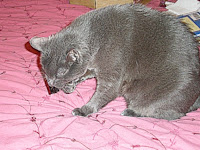 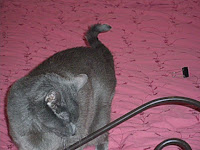 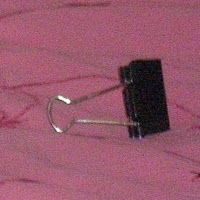 After visiting The Crypt Saturday, we popped into the Hornet so I could pee and I saw this in the bathroom stall. It was so poetical-artsy I had to take a picture of it to share: 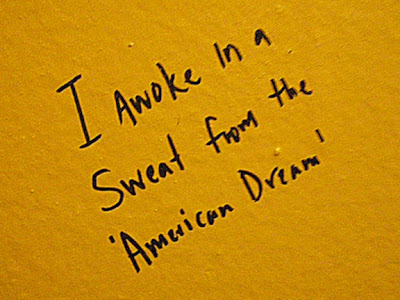 [SUMMARY: She took pictures in a public bathroom stall?]


*FOOTNOTE (asterisked. I'm getting soft in my old age): For those who don't know, this is kinda funny. The Wonderlic is an intelligence test made famous by the NFL. Well, famous to those who indulge in a little ESPN during recruiting time. The college guys coming out for the draft go to the combine. They are run through paces that look a little like fourth grade field day (remember field day? Good times.) and they take the Wonderlic test. Every year, some guy scores a two and everybody talks about how a cactus might be a better choice for the D-line, providing the cactus was big enough to block effectively, 'cause it's sure going to block smarter.

You can take a sample version of the test here. Just to see if you're smarter than a football player.

I envision the Wonderlick (my own creation, patent pending... well, pending application, approval and usage) being a test of humour. Which Wonderlick-the-pig items do you laugh at? Will you score a twenty-five (Jon Stewart)? A ten (Newt Gingrich)? A two (Jamar al-Fadl)? A one (Jimmy Fallon)?

†FOOTNOTE (crossed): Do you camera, take the computer...

‡FOOTNOTE (double-crossed): No wonder cats are so high strung. We're always looking for new ways to skin them.

§FOOTNOTE (swerved): Was that one of the hobbits from "Return of the King"? Bill Boardwise?

¶FOOTNOTE (paragraphed): If you don't know what that is, it's exactly what you *think* it is, given the context. I wouldn't Google it at work if I were you.

%FOOTNOTE (percented): If you can read this, thank a teacher. If you laughed at that, thank Sarah.

#FOOTNOTE (pounded): Yes, much in the way I hooked the camera up with the computer. In fact, the deeper you delve into that metaphor, the more interesting and apt it becomes.

@FOOTNOTE (atted): Both to ease his pain and because he was previously on his best behaviour to impress Stacy.

‡‡FOOTNOTE (doubble-crossssed): Of which I could never be one. Pot makes me utterly stoopid. I can't talk. One New Year's, some friends of mine and I got stoned and watched a Beavis & Butthead marathon, culminating in the Beavis & Butthead movie. At some point, I realised we were watching Space Ghost. I turned to my friends and tried to say, "When did Beavis & Butthead end?" but what I actually said to them was, "Duhhhhhh." And because they were stoned, they laughed like loons. And because I was stoned, I tried to laugh, but mostly what I did was go, "Duhhhhhh."

§§FOOTNOTE (dangerous curves... I've already used that one, haven't I?): And twelve dollars. Not each, mind you, twelve dollars TOTAL. It's good to be queen.

¶¶FOOTNOTE (drumsticks!): You may remember he is Kelley's best friend. We were getting friendly, largely for Kelley's sake, when he had a little set-back and started being increasingly assish. I haven't even seen him for two months or more, possibly because I chewed him a new asshole the last time he pissed me off.

^FOOTNOTE (careted): I get the feeling she might have, actually.

†††FOOTNOTE (very cross): A move my brother can attest still plays in the 'burbs. And I gotta say, The Waiter has marvelous technique and I got a little fluttery and giggly until I found out his dirty little secret.

$FOOTNOTE (moneyed): Here's the thing: I don't mess with other girls' boys. I did it once accidentally (Hi, Jeanne!) when I was a sophomore in high school and I hated the feeling of watching another girl cry because I was an inadvertant bitch. Girls who screw with other girls' boys are termed "barracuda" in my book. On the other totally hypocritical hand, I have a fantasy about sleeping with a married man... not one I'd ever act on. Except I did. Unwittingly. And maybe that's what really pisses me off in this scenario... I got one of my low-level fantasies and I didn't even get to enjoy it as such.

§§§FOOTNOTE (wound like a spring): Y'all know... preparation. Just in case. In anticipation.