Saturday was our Family Christmas Party.

Thirty years ago my grandfather died right around Christmas. Legend has it his wake was the advent of the Family Christmas Party.†

There was probably tequila involved.^

There was definitely Mom involved.

Besides, the family group had been a nice, manageable dozen or so, but branches of the tree were coming back to roost‡ and Christmas presents for everybody would be prohibitively expensive.

So they% came up with the idea of (basically) an heirloom generator.

Each person would make a set of ornaments or a wreath or some such, then we would exchange them. Mom had been to a white elephant party§ and was champing at the bit to perpetrate that brand of chaos¶ on someone else.

Over the years, people have lost hair, sleep, dignity, humility and/or ego over their contributions. Four-letter words are the order of the day.

[SUMMARY: What goes better with Christmas than a little profanity?]

This year was no exception, since, as you may also remember, Father and Brother knit their projects.& And, as y'all know, knitting fully embodies the joys of lost hair, sleep, dignity, humility and/or ego and four-letter words.

I learned a lot about the male portion of my family this year.

Father would pick up the knitting, think it looked wrong, place it carefully in its bag and call.

"Daughter, something's wrong. I can't figure out what it is, but something doesn't look right."

Brother would say, "I need you to fix my shit.

Father would email under the subject "@#$% knitting."

But they figured it would be worth it for the disbelief and awe when the rest of the family found out they'd *knit* their Christmas projects.

[SUMMARY: Is better to look good than to feel good, darling.]

Here's the actual true story -- in pictures@ -- of Dad's stocking at the Christmas Party: 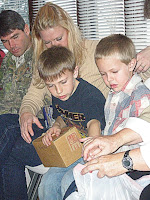 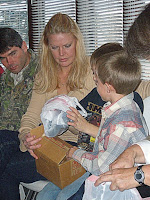 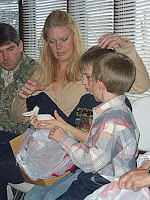 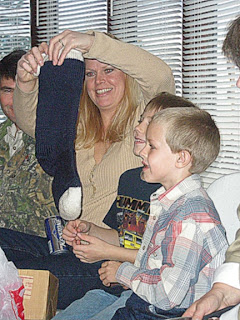 He has a friend whose wife quilts and has one of those fancy embroidering sewing machines. She made the label.# 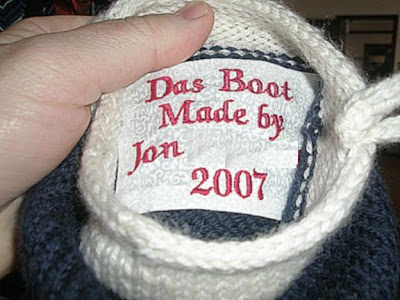 I came back from San Diego and Houston expecting, "Daughter, something doesn't look right," but when I called Dad upon my return, he said breezily, "I'm just about done with the leg. I'm just going to knit a couple more rounds, then I'll change colours and I'll be done."

[SUMMARY: I couldn't be prouder.] 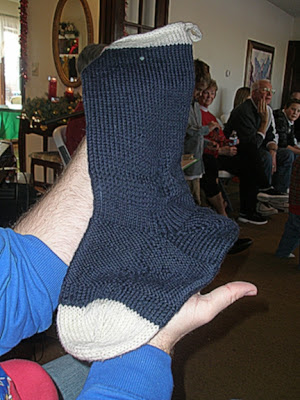 And Brother... ah, Brother. The curse of the tight stitch is apparently hereditary. I got it from Dad, and Brother got it in spades.

As I've always told y'all, though, the only finite point in gauge is the tightest possible stitch. Everything else has room for variables, thus may not be so even.

How much more even can you get than this?†† 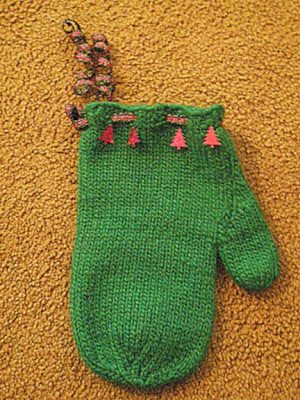 He finished the thumb, felted it and embellished it with no Seester supervision whatsoever.

Then there was my project.

[SUMMARY: Then there was my project.]

It was going to be a poinsettia, based on a watercolour of Mom's,* needle-felted to a lovely white felted bowl.

Waylaid by the felting incident, I decided to just take my practice piece from the needle felting class I took in November and frame it.

Only it's a wonky size and wouldn't work in a frame.

So I went total cheese and just strapped it to a bit of wood,‡‡ added a loop of yarn and called it a wall-hanging. 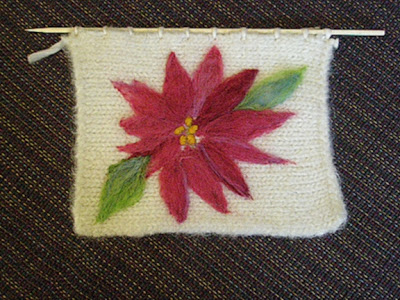 Don't adjust your monitor; it's felted. It's supposed to be blurry. 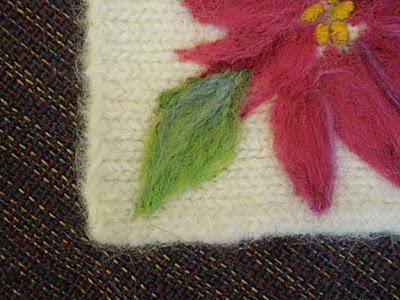 [SUMMARY: Fuzzy. In so many ways.]

As for the original felted bowl, here it is in all its blue-lint glory. 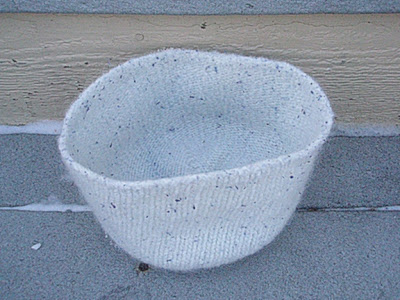 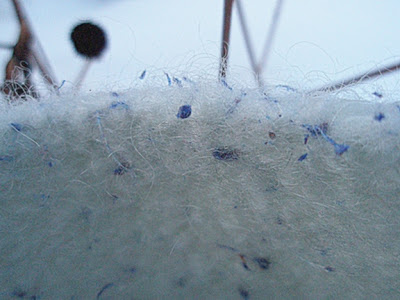 Bet you never dreamed you'd be looking at close-ups of lint this holiday season.

I believe my plan is to felt the hell out of the bowl, lint and all, and see if it will take on a nice, pebbly, seemingly-deliberate look.

Then I will give it to my SIL, who expressed a strong desire to own such a bowl. 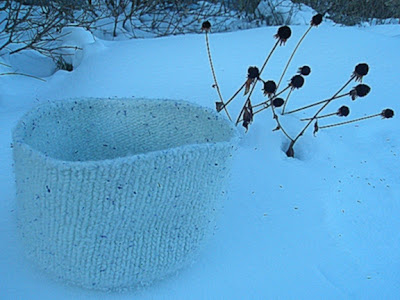 Maybe this will be next year's Christmas card.

Bet you never thought you'd see someone get all artsy over a big ol' mistake this holiday season either.

[SUMMARY: Merry Chrismakwanzukkahstice to all, and to all a good knit.]

^FOOTNOTE (careted): And Mom didn't drink so much (I don't know where I got it), so the tiniest hint of tequila would send her into a twinkle-light-and-tinsel fantasy world. Why that didn't disappear along with the margarita hangover, I'll never know.

§FOOTNOTE (swerved): Y'all know -- where the gifts are placed in the middle of the room and everybody draws a number. The first person opens a gift, everybody oohs and ahs, then the second person is up. That person can either open a new gift or take the gift from the first person. Down the line, you can spend a half-hour or forty-five minutes trying to get back to the numbers while people steal from each other and go for replacement gifts.

¶FOOTNOTE (paragraphed): People go feral, sentimental dreams are crushed, small children cry... the quintessential Christmas spirit. When a gift has made its full three trades and is deemed a "keeper," the new owner does a keeper dance, ostensibly to express joy, but clearly to say, "Nya-Nya-N-Nya-Nyah." If nothing else, the Family Christmas Party raises thick-skinned kids.

&FOOTNOTE (ampersanded): Funny side story: I was worried that once Father and Brother had a chance to knit their own items, they'd realise how relaxing and easy it really is and all mystique and awe would go out of Seester/Daughter-knit gifts. BWAHAHAHAHAHAHAHAHAHA!

@FOOTNOTE (atted): Some of you expressed some doubt as to the existence of knitting pictures. Some of you may think you have reason to doubt, but some of you exhibit shockingly little faith. Stacey. :P

††FOOTNOTE (ddouble-ccrossed): The answer you're looking for is, "None. None more even." 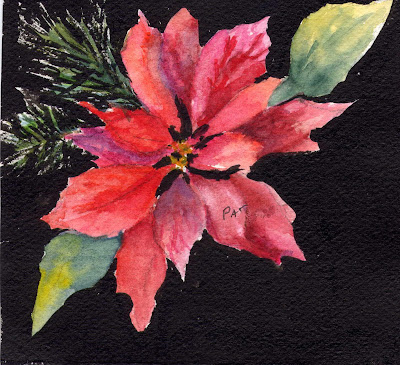 ‡‡FOOTNOTE (doubble-crossssed): Lovingly but incorrectly identified as a knitting needle. It's a bamboo shish kebab skewer.
Posted by Marin (AntiM) at 7:47 AM