First, because this is still, above all, a knitblog, some knitting: 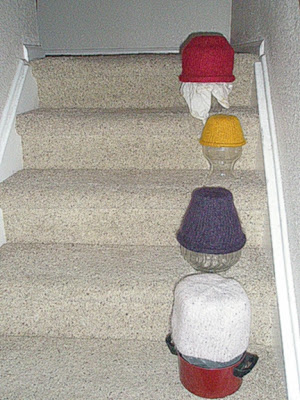 The top three are graduated bowls, based on Leigh Radford's pattern in "One Skein."

On the bottom, you may recognise the Lint Bowl, felted and felted again. It was 75 stitches. Some of the blue flecks became part of the bowl, some still hung around in the halo.

As you can see, they weren't nearly uniform. In a perfect world, Leigh Radford would have told me which Glad bowl to buy to block these suckers on. I settled for a sort of frankincense-gold-myrrh look I think is appropriate to the season.‡

I nested them, still damp, and stuffed them in a box for eBeth the SIL for Christmas. I told her that she could shape them any way she wanted while they were still wet -- could even soak them and do it all her way to start with.

One of them is now a very oblong napkin holder.

I won't make you wade through the roughly 200 pictures I took of the nephews, but will treat you to a random sampling of the weirdness that is the family of AntiM: 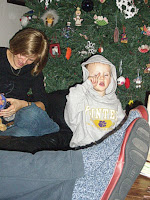 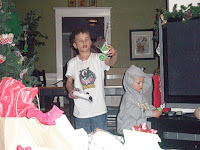 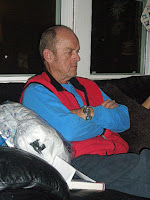 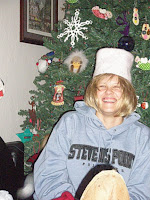 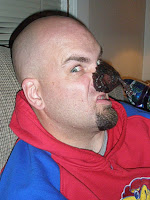 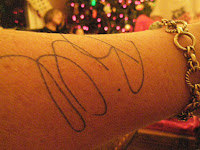 That's me on the bottom. Brother said, "Can I write my name on your forehead?"

"Can I write my name on your nose?"

"Can I write my name on your cheeks?"

"Can I write my name on your ears?"

"Can I write my name on your arm?"

Five days and four showers later and I still have little blue ink flecks on my arm.

[SUMMARY: I am one with the Lint Bowl.]

The smallest bowl became B-Cat's house of pain. B-Cat was adorned, then escaped, only to be hatted again and sadly resigned to the hellish prison that is her life on Christmas:# 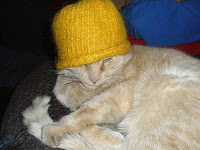 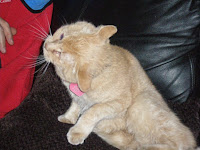 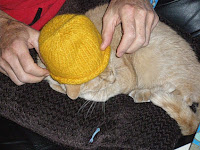 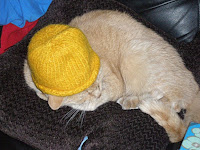 I got several lovely gifts, of course, but the one I find most blogworthy is this: 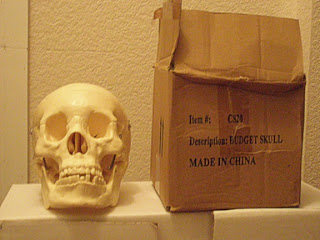 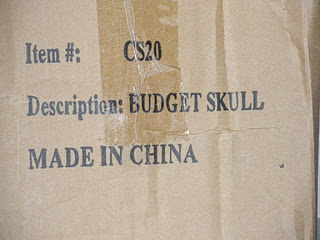 Brother tells me the Deluxe Skull has a lot more dissection capability. Mostly, this one spontaneously loses teeth.††

Brother also tells me it's made in China, so I probably shouldn't lick it.

[SUMMARY: Listen to those who know and love you.]

I have to relate a little my-nephew-did-the-cutest-thing story to you.

Dr. Doom was so excited watching me open the present he gave me. Before I even had the first flap of wrapping paper loose, he said, "It's a frame I picked out myself with a picture of me..."

And sure enough. Little naked Dr. Doom paddling his feet in the water. It's all very tasteful and the salient bits are out of view, but definitely a naked three-year-old.

eBeth had picked out one where he was apparently roaring at the camera and tried to talk him into that as wholly appropriate, but he was having none of it. So she put her version behind the naked picture in case I should want to maybe rotate them.

I don't know that I ever intend to rotate them.¶¶

[SUMMARY: The most Marin gift of all...]

The nephews had a pretty good Christmas morning in their new AntiM shirts. 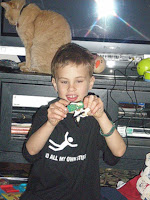 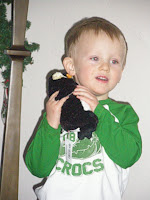 And I love my nephews, but the best thing about Christmas morning before the drinking began was Retarded Hand-knit Superhero Puppet Theatre: 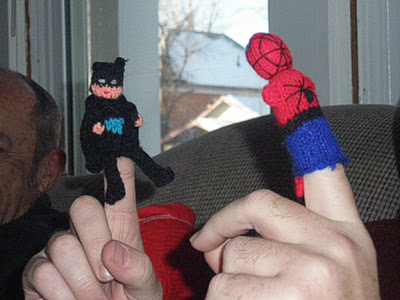 Batman: "Dude, you're wearing a skirt."

Spiderman: "At least I have a spider on my chest. You have a scary, mighty triangle. Ooooooh..."

RHKB: "Yellow? What kind of colour is that for a superhero?"

BYGB: "Is that a triangle on your uniform?" 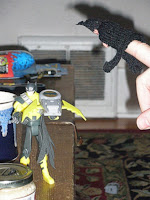 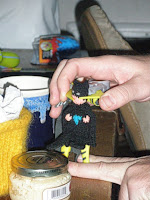 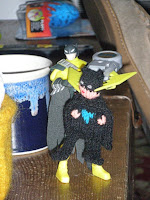 [SUMMARY: Theatre of the Absurd.]

I got many tiny bottles of alcohol in my stocking, and this small bottle of what I hope is champagne, and not -- as it may be -- champagne-flavoured soda. Which sounds ghastly. 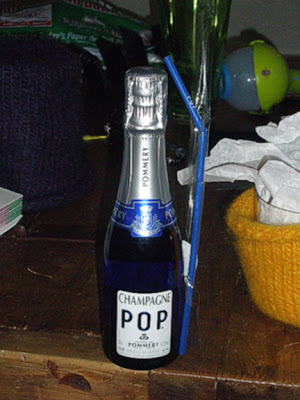 Then Brother and eBeth and the Nephs left for Pennsylvania and I stayed in bed and read almost all day Sunday and Monday. I was going to clean house. Really. 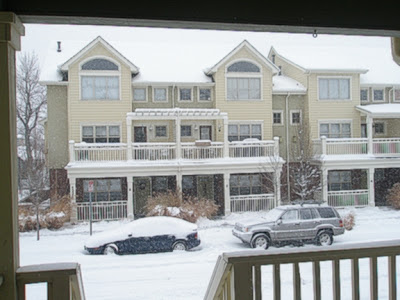 So, Merry Christmas to all and to all a good night. 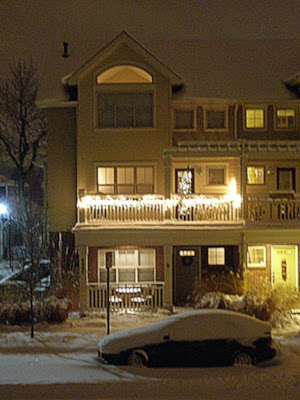 WEATHER UPDATE: It's snowing like the Third Circle of Hell here, so Denver is closed.


†FOOTNOTE (crossed): I really wanted to make the purple one the big one, since purple's my favourite colour, but I decided to go with what eBeth might want rather than my own selfish taste. It's another Christmas miracle.

‡FOOTNOTE (double-crossed): And I will insist to my death that I *meant* it to be that way. I'll do that right before I whisper, "darjeeling" and gasp my last breath.

§FOOTNOTE (swerved): Wondering how long this can possibly go on.

¶FOOTNOTE (paragraphed): Wondering whether to risk life and limb on a possible bluff.

#FOOTNOTE (pounded): Don't let her fool you too bad. She ate her own weight in kitty treats that night.

††FOOTNOTE (ddouble-ccrossed): Which is mostly OK because it came with a baggie of bonus replacement teeth.

*FOOTNOTE WITHIN A FOOTNOTE: Because Brother is so, y'know... normal. (Where is the eye-rolling emoticon?)

¶¶FOOTNOTE (two of clubs): And I would so love to share that picture with you, but if I didn't get taken down on To Catch a Predator, I worry I'd become a very popular NAMBLA target. Once again, the line between art and pornography is blurred and trampled.

##FOOTNOTE (gaining pounds all the time): For emphasis, you know.
Posted by Marin (AntiM) at 7:33 AM