Weekend Between the Pipes

For those of you not hockey-literate, that has nothing to do with the crack y'all might assume I've been smoking, lo, these past 10 months.†

Genius Sarah and I toddled over to the Pepsi Center early to "help set up." I use quotes because Annie and Sandi were really on top of it and didn't so much *need* us. But it did give us an opportunity to insist the security people at the Pepsi Center call all over the arena on their radios to get us clearance.‡

[SUMMARY: Wreaking havoc wherever I go...]

Sylvia sent a load of fuzzy crack and some fantastic prizes§ along, so we lugged those up to the Interweave Sticks 'n' Stitches% table at Section 317.

Mostly we just stood around for awhile, jawing and shifting from foot to foot. Sandi was hungry, so we went in search of our complimentary hot dogs at Section 354. "Why 354?" you might ask, when there were stands so much closer to the table at 317 and our actual seating in Section 312.

I'm guessing because you had to pass a lot of mini bars on the way and they hoped knitters wouldn't be able to pass up the chance to belly up to the bar. As I liked to say when subsequent knitters asked where it was,¶ "Go past the beer stand, two Tuaca bars and the margarita bar and it's on your left."

[SUMMARY: You know more about Pepsi Center concessions than you ever needed to know.] 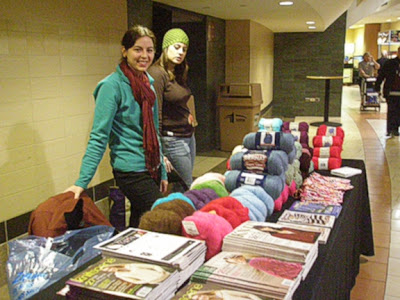 Knitters started showing up in small droves, perusing the available goodies and walking away with new stash. And magazines. And patterns. And project bags. And Posh coupons.

Annie told us when we got there to grab what we wanted and I thought, "Well, I'll just wait and see if there's anything left that speaks to me. Let the other knitters have first crack."††

This would be knitters. Taking first crack. 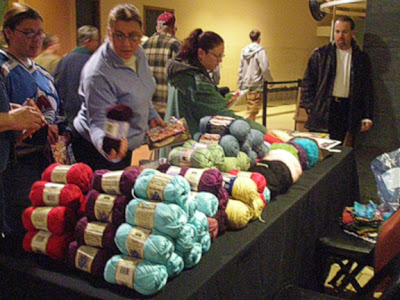 Sarah and I manned‡‡ the table between the second and third periods, just in case there were additional donations to Warm Up America and it looked like locusts had descended upon the table. There were a few magazines and random patterns left, but the knitters had done a pretty good job of denuding the crops.

Which is OK. I don't need any more yarn.

[SUMMARY: Need is such a confining word.]

Hockey knitters at work and play 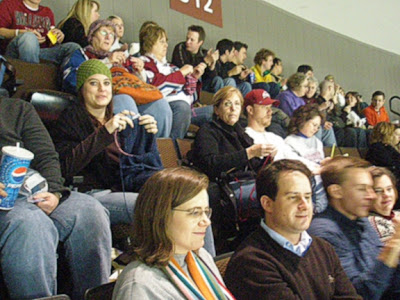 I also got to meet my new best friend, Brendan, my rock star contact at the Colorado Avalanche. Isn't he cute? He even asked after my Lizard Ridge.§§ Apparently, Brendan's brother-in-law¶¶ works at Interweave. Maybe in accounting. 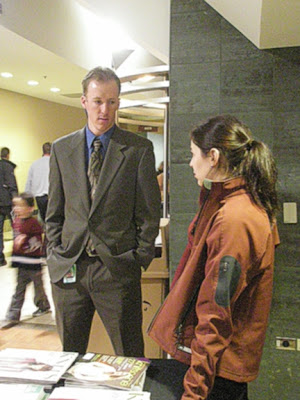 Now, this one I'm sharing, despite its god-awful camera shake because it made me laugh. More than once. 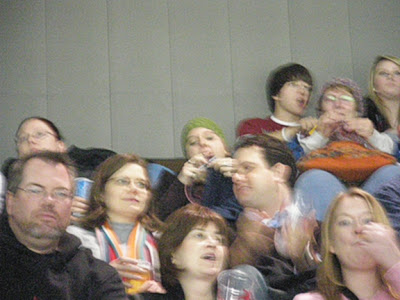 I caught Genius Sarah in a yawn, but doesn't it look like she's harmonising with the guy behind her and the chick down front? And I love the look on the face of the girl in the lower right corner. Like she was caught doing something naughty.##

TiVi STAR UPDATE: eBeth, the SIL, caught my SupaStar appearance on the TiVi at the gym. For those of you not following along in the comments, she first recognised me by my HANDS. Which shows a dedication to the cause I find admirable.

Also? I can't help but wonder if I went to the gym more if it might not have been bigger publicity for me. Y'know... like people would look up and say, "Hey! Isn't that the chick who's on the treadmill every day? I spotted her on the free weights last week! Ooooh! Brush with greatness!"

[SUMMARY: I may have to revisit the New Year's Resolution thing to include going to the gym more simply for recognition factor.]

Happy Monday, y'all. It's going to be a long, long week -- the first time some of us have to work five full days in AGES.


†FOOTNOTE (crossed): It refers to the goal... the area between the pipes that make up the frame on the net in hockey. Let it never be said I'm not wildly educational.

‡FOOTNOTE (double-crossed): They don't let people in more than one hour before the game (we were there at 5:30 for a 7:00 drop), but you see, we weren't just PEOPLE. We were VOLUNTEERS.

§FOOTNOTE (swerved): Lovely little project bags madly run up on her serger in the back room of Posh like Nikes in a Thai sweatshop.

^FOOTNOTE (careted): It was Sandi's first hockey game ever, so Annie wanted to be sure she didn't miss the skate-around or the gobo-infused introductions. Annie's from North Dakota, so she knows how important the whole hockey *experience* is for a virgin hockey watcher.

#FOOTNOTE (pounded): Note Sarah, in true Genius fashion, sporting the Koolhaas hat from the Interweave Holiday Issue. I'm beginning to think a good reason to knit stuff for myself would be so I have something handknit to show off at knitting events. Or so I can suck up to the Interweave crew by wearing something from their publications.

§§FOOTNOTE (tempest-toss'd): He didn't know he was asking after my Lizard Ridge, per se... he just asked what I was knitting, made some appropriately non-commital appreciative noise and exhibited extra interest by grasping the concept that I would be sewing the strip together with other strips to make a blanket.

¶¶FOOTNOTE (gone clubbing!): Or brother. Or sister-in-law. I'm old and feeble and don't necessarily remember the details, but I KNOW Brendan has family at Interweave somehow.

##FOOTNOTE (pounding like a tequila hangover): Hand-in-the-cookie-jar naughty, not rug-burns-from-the-stairs naughty.
Posted by Marin (AntiM) at 5:54 AM