I know I'm not the only one experiencing this. Let's count back nine months, shall we? What drives people to fuck like bunnies in... September?

It's not so cold you'd want to generate the body heat.

It's not so hot you'd be half-naked, sweaty and tempting on a daily basis.

[SUMMARY: September is the sexiest month?]

And piled on extra mini-marshmallows when Annie wasn't looking.

Here is the finished product†:

All aboard the Cabernet Express! Woo-woo!

Friday was First Friday and we KIP'd at Sylvia's House of Fuzzy Crack until about 9:00, then headed to Goosetown Tavern to do some damage. This is where the IRS showed up and ruined my weekend when I found my bank account emptied and my debit card rendered worthless.††

[SUMMARY: Not that I'm bitter about the IRS thing, nor that they ruined my ENTIRE FUCKING WEEKEND. Nope. Not a bit.]

Saturday morning was the train cake party, where I was the only single person and the only person without kids and I didn't even win a prize.

But, awww... wookat da twins.‡ Reward enough and reason enough, to be sure. 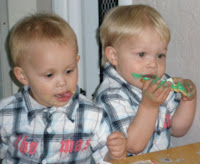 And the very important blowing-the-candles-out picture with the ever-lovely Annie:§ 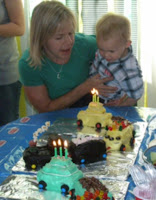 Later, that same morning...
I went to Elitch Gardens with this man... 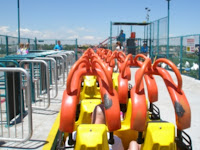 That man would be Shanny. That ride would be the Boomerang.&
There's only one person in the world I've been friends with longer than Shanny. Shanny lived around the corner from me in high school and we met around Christmas 1981 outside our houses, causing trouble. We were theatre fags together from the fall of 1982 through all our illustrious high school careers. Now we vacation together.
His daughter was born on my birthday, semi-deliberately, and his wife's birthday is the day before mine. Shanny knows from June birthdays.

Maybe he could explain the September thing.
Anyway...
Elitch's was Shanny's contribution to my 40 Days & 40 Nights celebration leading up to the big 40th birthday bash. Well, that and a radio remote which may not be that exciting for Shanny, but was interesting for me.
Anyway...
Some of the rides at Elitch's have... tailored seats. Shanny was denied access to three rides we wanted to go on, and he suggested the title for this post should be "Too Fat for Fun." Honestly, as my brother said, he's not THAT big.
Despite that, he is contemplating a diet based on wanting to get on the tailored rides. I think it would make a hell of a best-selling book.
Tangent: Shanny became aware of my total blogdorkedness when I struggled to get this photo: 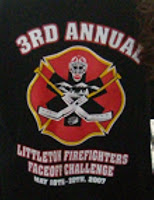 That's a t-shirt on a kid in front of us for one of the roller coasters. I told Shanny I had to get it because... well, chicas, firefighters? Playing hockey? *drooldrooldrool* I want y'all to kick back for a second, close your eyes and daydream on that one.
Got it?
Good, now wipe your chin and change your panties.
[SUMMARY: Saturday...]

Anyway...
Sunday brought Red's birthday. Kathryn and I walked over to Tastes for the festivities. Would you believe... at least a half-dozen knitters and not a scrap of WIP to be seen? Truly a testimony to Red's compelling nature that we'd all rather watch her than knit.
Kathryn and Red 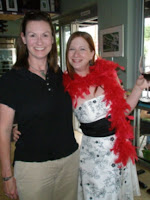 Dark C¶ was there, darling girl. Brian, too, but I won't darling Brian.% 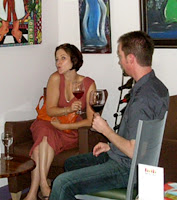 It's simply not a birthday until the birthday girl has cake. Really good chocolate cake with raspberries. 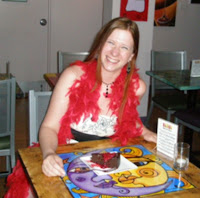 Then it was time to head to Brother's house for Brother and Dad# birthdays.

Sis-in-Law had just (justjustjust) returned from her Princeton reunion@:
Hold that tiger!

Dr. Doom got a tiger tail... and proceeded to soak it^ and fling the water about, sometimes sucking the water out of the tail and saying, "bleagggh!"

According to Brother, Grandpa (upon watching Dr. Doom operate for awhile) said, "You don't deserve this. Now, your sister... your sister may deserve this, but you don't deserve this."
The kid is undeniably weird in ways I was weird when I was a kid. Of course, most of Tallest, Hairiest Nephew's weirdities are very familiar to me too.
What do you suppose that says about my level of weird?$ 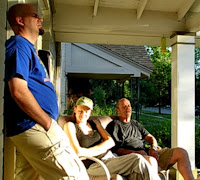 Let me present a little evidence that there is an element of heredity, and some wayward male relatives maybe shouldn't throw those house-shattering stones *too* hard:
There's a self-portrait setting on the new camera* 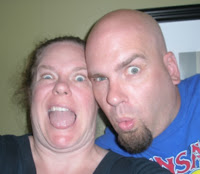 Uh-huh. Everybody else is normal. 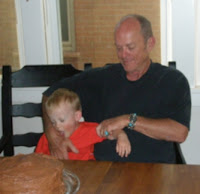 And just for the record:

Cat for Scale on Sperm Chair: a Still Life

Tomorrow? Oh, the places we'll go! We'll talk of many things, of panty lines and Canadians, of WIPs and strings...

†FOOTNOTE (crossed): perhaps more properly, "ARE the finished PRODUCTS."
††FOOTNOTE (ddouble-ccrossed): It's OK. It was their error and they're fixing it fairly quickly. With one exception (and I suspect that exception was the bitch who precipitated this little cash-flow debacle), every single person I've ever talked to at the IRS has been lovely and helpful and kind and all that... I just wish they'd get a little more organised.

And stop fucking stealing my money.
‡FOOTNOTE (double-crossed): And it means NOTHING that that's almost exactly how I reacted to Ally's new puppy.
&FOOTNOTE (ampersanded): I think. Anyway...
§FOOTNOTE (swerved): Not to be confused with the Annie referenced yesterday. Though this Annie has a sandy sort of dog and isn't very tall, she's much less likely to burst into song.
¶FOOTNOTE (paragraphed): I think that's what the kids are calling her these days. At least Red is calling her that.
%FOOTNOTE (percented): I hardly know Brian. I don't even know if he's a Brian or a Bryan. You'd think I had no background in journalism at all, as cavalier as I am about people's names on this thing.
#FOOTNOTE (pounded): OK, mostly we call him "Grandpa" these days, but my dad. Anyway...
@FOOTNOTE (at'd): Yeah, I know. We love her anyway... through all the math and the degrees and the Ivy League.
^FOOTNOTE (carated): Prompting one of the great phrases of the day: "If you're going to water your tail, do it on the grass." As a parent, you get to say all variety of shit you never thought you'd say. You never thought *anyone* would say. Anyway...
*FOOTNOTE (asterisked): My brother and I have climbed a 14,000-foot mountain together. We've survived hundreds of family gatherings together. We've braved the wilds of Antarctica and enjoyed the fruits of New Zealand together. We survived my aunt in Los Angeles together. And every single event has a photo of us that looks an awful lot like this.
The self-portrait setting on the camera is a real boon, let me tell you. We can be all goofy and shit in much clearer format than ever before.
Hey! you can see up my nose holes from here!