With Red's permission, I shall brief you (pun intended) on her date Monday.

I had the honour of being Red's bail-out and safe call on a semi-blind date Monday night. She provided me the location, boy's phone number & name† and strict instructions to call at 9:00 to see how she was doing and possibly provide a graceful out. We devised an Izzard-based code word system‡ and we were ready to go.

Actually, there was a whole scenario under which I would show up at the date site in pajama pants and curlers with a little water splashed on the front of my shirt to mimic the look of an uncontrollably lactating woman, brush my hands clumsily down my breasts a couple of times and sniffle, "When you coming home, Red?"

It was REALLY funny at Goosetown Friday night.

Things were going well enough halfway through that she called to tell me they were switching locations and the 9:00 call was unnecessary.

She called at 10:30 to tell me she got home safe and, well... things went a little downhill from the mid-date call to the safe-home call.

Besides some inappropriate touching, Inappropriate Remarks Boy (as he will forever be in my mind) used the word "babble" at least three times. Not good.

The crowning jewel of his inappropriate evening, though, was when he told her, "I didn't think the date was going to go anywhere when you showed up with visible panty lines."

When Red relayed that to me, my first thought was, "Is this guy gay? Do men even notice -- or worry about -- panty lines?"

Taking the concept a little further, I thought, "Maybe he's a fashion snob and was saying he'd never date a girl who subjected him to the horror of panty lines."

I mulled for a second more.

It finally hit me.

"Was he saying you didn't care enough to dress properly for him, so he figured you'd already written the date off?"§

Girls think so much about every little detail (so the story goes) that if they show up with panty lines, well... apparently it's the next generation's version of not shaving your legs and wearing ratty underwear so you don't accidentally sleep with a boy on the first date.¶ And Inappropriate Remarks Boy was pretty well convinced he'd cracked that code.

Wonder what he would have done with "babies on spikes."

Poor Red. It gets funnier every day, though she had a little setback into bitter some time between Dairy Queen last night and comments this morning. Squint, Red. Squint and turn your head to the left and maybe you can pretend I'm talking about someone else.

Here's a funny thing I got in my email Sunday:

That's from the Canadian Housing Association.

Ally? Anything you feel you need to tell me?

Or maybe the CHA just goes through the blogiverse looking for fond mentions of Canada and British spellings.

[SUMMARY: I love Canadians and now Canada wants me to live there.]

Meanwhile, back at the knitting...

I cast on for the fourth and final border bit for Stupid Blanket last night. We are talking mere hours from complete satisfaction of the obligation and frustration that has been Stupid Blanket.

And if the Drunken Knitters tell you I told them I fondle Stupid Blanket every night and think of it as a little miracle of textile goodness, I'll deny it to the ends of the earth.

Green Gables is in the final stretch... and that may be an apt phrase. I read Enchanting Juno's account of short-row shaping for us boobalicious gals and thought I'd try to wing that.

After a couple of hours of basically knitting heels into the sides of the sweater and ending up with completely backward darts on one side and something resembling a pockmarked caterpillar on the other, I gave up, frogged and decided to follow the pattern. If it's too wonky to wear happily, I'll make the next one better.#

The toe-up, two-at-once socks have reached the heel(s) and I'm trying to do anything to avoid a lot of wrapping and turning. Anybody know a good, readily available (i.e. -- I don't have to order a two-year-old issue of Interweave Knits to get it) toe-up heel pattern that doesn't require a lace needle and double-joints to pick up wraps?

And last on our list of promised topics for today: Strings.

I just happened to discover destash.blogspot.com yesterday and showed up just moments after lovely Hazel posted her Noro Kureyon. Seems she was all excited about Knitty's Lizard Ridge^ but then found she was allergic to the Noro.$ So I got ten skeins of Noro and a damned good start on my own Lizard Ridge, after which I've been lusting,& for $70.

For whom shall I knit Lizard Ridge?


†FOOTNOTE (crossed): Much like you are in charge of giving the police my blog as a record of hostile Male Lady activity should I be found dead in a ditch, I was in charge of making sure justice was served should Red meet a similar fate at the hands of Inappropriate Remarks Boy.

%FOOTNOTE (percented): It's why lingerie is not such a big deal to most men. As Steve once said, when asked if matching bra and panties mattered to men (I think I phrased it, "Doesn't it impress you when a girl's bra and panties match?"), "Marin, if I'm seeing panties, I'm not much worried about what they go with."

§FOOTNOTE (swerved): Serious re-engineering of the conversation. I spat out a bunch of words that eventually got across the *idea* of "Was he saying...?" My gast was flabbered and I wasn't speaking so good.

¶FOOTNOTE (paragraphed): Yeah, it didn't always work for me either.

#FOOTNOTE (pounded): By this, I mostly mean I'll actually look up directions and not count on my own engineering and math skills (hello?! FOUR!) to apply advanced tailoring techniques to my knitting. 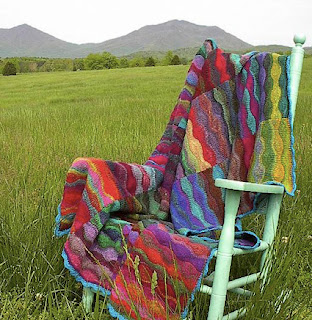 $FOOTNOTE (moneyed): I know, I know. Breathe into a paper bag and pray for Hazel.

Did Stupid Blanket teach me NOTHING?