Skate On With Your Bad Self

When was the last time you went skating at Skate City?†

It's just exactly like you remember it, only they're playing more Green Day and less Heart.

Not surprisingly, they're playing the exact same amount of Michael Jackson.‡

I don't know if I've mentioned this, but back in January, I decided to do a 40 days and 40 nights celebration for my birthday, seeing as I'm turning 40. It started May 20 and is culminating in the big birthday thing at my house on June 30.@

I put it out there to my friends and, well, they've come through, some in bigger and/or weirder ways than others.

[SUMMARY: Follow your dreams. You can achieve your goals; I'm living proof.]

Matt (Laurie, of Suburban Sedation Crew fame, her husband%) set up a big Skate City bash for the EIGHT June birthdays^ (including yours truly and his wife and both of his kids.) out of my school crew.

So anyway, there I was at Skate City, all deer-in-headlights with clonky brown-and-orange skates,§ stuttering and stumbling my way around the rink (the flashing lights and gobos, while festive in a Donna Summer kinda way, DON'T help). However, I got many compliments on my ongoing weight loss (Jen is my new best friend!), which I attribute primarily to the illusion created by the super-model height lent me by the skates.

For the record, I went around the rink a grand total of 3.1 times.& My hips were still sore last night. It's a hell of a workout, skating. Remember when you used to fly around the rink for two hours and be all disappointed and shit when they told you to exit the floor and turn in your skates? Good times, good times...

[SUMMARY: Skating: not for the faint of hip.]

Most of my pictures from Skate City suck¶ but I did get this utterly adorable picture of Dance Machine C (Jack's son -- you may remember Jack from poker night). Kid's got rhythm. I suspect he got it from his mother. 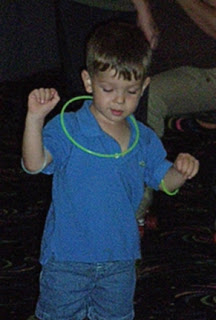 I have long been fascinated with the carpets in casinos and movie theatres.# I was unaware (or perhaps had blocked it out) that Skate City gets their carpet from the same colour-blind clip-art dizzy junkies who make casino carpet. 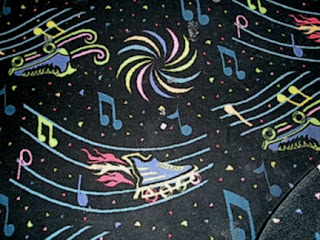 [SUMMARY: Skate City: still cheesy after all these years.]

After Skate City, we headed to Legends (of Aurora!) for beer and wings and stuff and I dragged out my knitting.

[SUMMARY: This is still sort of a knitblog, right?]

Of course, y'all know I'm never averse to knitting in public or even knitting in bars (perhaps *especially* knitting in bars), but I was among non-knitters and did get a little dose of grief. Jen, who was so kind to tell me how skinny I was, kept poking at me about my knitting.

"What, are you on a deadline or something?"

Well, yes, I was on a deadline, but I made sure Jen knew I would probably have been knitting anyway. Just to uphold the KIP/KIB tradition. Y'all know.

After Legends (of Aurora!), we headed to Laurie's and Matt's for drinks and, apparently, bathrooms. Several people had apparently expressed a need to pee, so Laurie said, "My house has three bathrooms!"

Unfortunately, Matt had Laurie's keys, so when we got to the house, with several adults (kids have no problem peeing at Skate City or in bar bathrooms) doing the pee-pee dance on the front lawn, we couldn't get in.

And Matt wasn't showing up.

And there were reports from reliable sources that Matt hadn't even made the turn to come home.$

I said, "Does Matt have his phone?" and Laurie dug in her purse, only to find, "Matt has MY phone!" Laurie didn't know Matt's phone number, so I called her phone and Matt answered, "I have Laurie's keys!"

Meanwhile, it had been determined that with... well, with a certain amount of effort, a small child could break into the house and let everyone in. 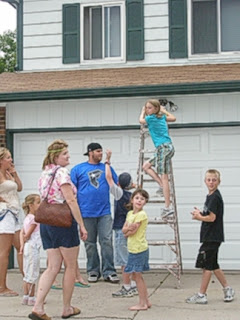 Austin got through the window just before Matt showed up with the keys. 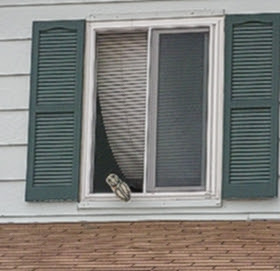 Once Austin went through, all the kids wanted to do it. Some even got back in line to ride again. So when Matt pulled up, all the moms were inside peeing and the kids were streaming up the ladder and into the window like ants to a jelly spill.

[SUMMARY: In the suburbs, they make their own fun.]

I gotta say, those suburban family folks know how to set up a birthday. I got three bottles of vodka and a bottle of wine (not to mention the cookie mix, which is, you know, separate from the alcohol thing, but at least as exciting).

And the sky was really pretty. 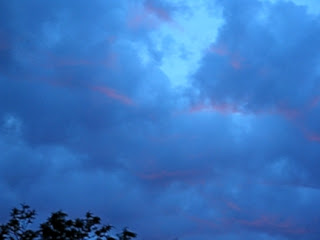 †FOOTNOTE (crossed): Or whatever it is in your neck of the woods. If it's less than 10 years, you're either too young to be reading this blog (go ask your mom what "holy fucking cats" means), you have small children or there's something suspect about your hobby scheme.
‡FOOTNOTE (double-crossed): One song. "Don't Stop 'Til You Get Enough"
@FOOTNOTE (atted): The fact that a 40-year-old is far too old to party for 40 days and 40 nights is no longer lost on me. It's a good thing I have a vacation coming up after this debauchery.
%FOOTNOTE (percented): It's funny to put it that way, since I've known Matt for 25 years and I've known Lauries since she started dating Matt. But, anyway, Laurie's husband Matt...
^FOOTNOTE (careted): I'm telling you, September is the sexiest month.
§FOOTNOTE (swerved): Yes, they still have the same skates. Probably the *exact* same skates.
&FOOTNOTE (ampersanded): The point-one was when I agreed to head out with Laurie and darlin' Mary, datesake of my heart, and the lights came up roughly point-one into that round and they announced they were going to play "Red Light Go, Green Light Stop" and I beelined for the exit, knowing anything that required me to start or stop at will was a losing proposition and mostly an opportunity for mass hilarity on the part of the spectators.
¶FOOTNOTE (paragraphed): Don't be mean. I *know* you want to say all my pictures suck. This time it's because of the wonky lighting, not because of my anti-mad* photog skillz.

*FOOTNOTE (inside a footnote): No, AntiM isn't short for "anti-mad," no matter what my brother may tell you.
#FOOTNOTE (pounded): The world is my kitty toy.
$FOOTNOTE (moneyed): Matt, a good father, had headed to Walgreen's to get sunburn spray for his hurting son, unaware he was the linchpin on which Operation Adult Pee hinged.
Posted by Marin (AntiM) at 7:02 AM