So I noticed this last Thursday on the way to Knit Therapy:

Dude, I got this new tattoo. It's Japanese for, "All your bunnies are belong to us." 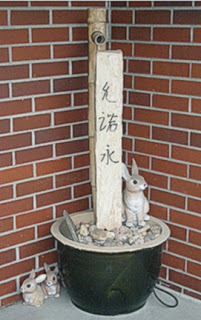 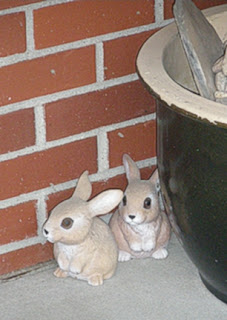 I will give all my carrots to the Reverend Sung Myung Moon... 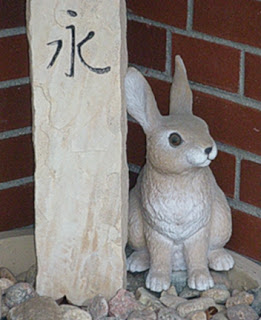 I like to think the neighbours that display this are hip and ironic and find plastic bunny zen fountains as funny as I do, but I'm pretty sure they're serious.
I can't quite decide if that's tragic, or if it just makes it funnier.
[SUMMARY: You're no bunny 'til some bunny loves you... you're right, it's not a summary, but I had an overwhelming desire to get that cheesy line in.]
So, meanwhile, back at the Brown Palace... You remember this thing at the Brown Palace? I invited The Boy. I sent him an actual paper invitation. OK, so I copied the engraved invitation they sent me and mailed it to him with a note§, but an actual paper invitation with actual handwriting on it.
He called this morning to decline.

The story goes (and yes, I believe him) he tried to get the day after off so he could, but the guy who covers for him is on vacation that day. Since it's so unlike him to call at all, ever, I was touched he called. Since he hates to talk on the phone, I was pleased he continued conversing for a half-hour after turning me down.
I also asked him if there was a reason Kelley was pissed at me, because when I'm not four, I'm apparently in middle school.
He said she told him I'd left a message, but she didn't really say what was up. He also said he'd asked her Friday if she'd talked to me. And asked her Sunday if I was going with them... wherever they were going.
One hand: Not a lotta help on the Kelley front.
Other hand: Asked about me? He asked about me? He wanted me to go with them?
I'm such a stupid girl.
I have no plans to get any smarter.
I do have a list of boys, in order of preference, to invite to the lap of luxury. I'm not sure exactly what it says about me or them or nothing at all that the boy least likely to say yes was the first boy on my list... and it just follows on down from there. The guy who will definitely say yes? He's the last guy on my list.
[SUMMARY: Stupid as a blanket, sneaky like cactus.]

Yarn P0rn, anyone?
You really, really want this yarn. Now, I haven't knit with it yet, but I'm going to go out on a limb and say it will be simply *outstanding* for lace knitting, because it's sososososo boingy and crisp. And the pretty, pretty colours.
Shibui!‡ 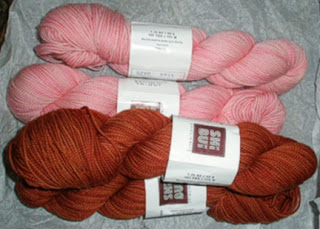 †FOOTNOTE (crossed): A first! Footnoting the title! Anyway, all credit to Sarah, whose "super fun times homeowner purchase!" inspired me to both spit coffee out of my nose [speaking of, do any Drunken Knitters remember why I nosed my Strongbow last night? I thought it would be a funny story, but then, juvenile-onset Alzheimer's... please remove me from my car keys] and indulge in the sincerest form of flattery.
‡FOOTNOTE (double-crossed): Now I want to go read Shibumi. And I want to call the yarn "Shibumi." Check this:
Dontcha wish your sock yarn was Shibumi like mine?
§FOOTNOTE (swerved): Proud of the note. Said I have no intention of spending that night on my own, want someone who knows his way around a woman's body, think he'd be a lot of fun in this capacity... but he should RSVP ASAP as I would be inviting someone else if he wasn't coming. Sarah may be a genius knitter, but nobody puts it on the table like I do.
¶FOOTNOTE (paragraphed): Seriously, it would be a lot happier if there was some actual humping involved. It may be crude, but I'm just sayin'.
Posted by Marin (AntiM) at 7:26 AM