Check this: a *seven* point eighth inning, with the rotation lapping itself. It's not rare-rare that a player bats twice in an inning, but it's rarely a good sign for the defense.

Client's office is six blocks or so from Coors Field. We had a nice lunch at Il Fornaio (including wine) and trotted up to the field.

I'm tempted to leave out the part where, two blocks from the stadium, Cindy said, "I better check for my ticket. Do you have your ticket?" and I realised immediately I'd left my ticket in the stall in the bathroom at Il Fornaio.

Also? This may not be the time to mention I left my wallet at home yesterday morning -- AGAIN -- and had to go all the way back to get it because, well... it's much easier to get out of the parking garage if you pay.

[SUMMARY: What is wrong with me? And why hasn't anyone taken my car keys away?]

Anyway, once the ticket crisis was averted, we trotted (once again) up to Coors Field.

The crabapples are blooming. For those not in the know, those pink trees on the left are crabapples. 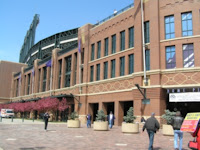 The Player is poised and ready to serve.

The girls were poised and ready to be served beer. And baseball. Let's not forget the baseball, what with all the beer flying around.

Since you asked... Cindy, Patti, Jo

Patti (who made this all possible and spent the day saying, "It's on me.") has her own brick on the walk in front of the baseball arch. Her husband bought it for her (that's the date of their wedding). Never was there a more deserving brick owner.

Welcome to Coors Field, Home of the Colorado Rockies. 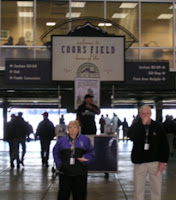 You may note how subtly I slip in with this next picture that we weren't just right off home plate, but in CLUB LEVEL. We had the Club Level Beverages to prove it. 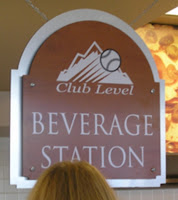 Scoreboard with the Rockies Clock. 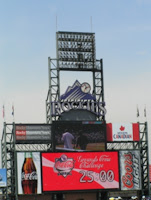 The boys of summer. 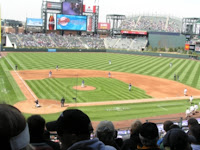 And the sparkle sock takes a page from the Yarn Harlot book and gets her photo taken on my seat (Seat 8, Row 8, Section 227, didImention Club Level). FYI? Knitting in Ballparks (KIB, too) can cause the man next to you to move down a seat so he doesn't have to either acknowledge your knitting or break his neck trying to ignore it.

Knitting toe-up socks around girls on the loose from the workaday world and buzzing on multiple Club Level Beverages can bring up all variety of contemplation for the use of the work in progress.

My best story about the sock: I'm just looking for the man who needs it for a, um... cozy. It's a hope chest, if you will. 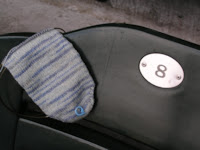 Sentimentality Alert (if you're having a really good day and don't want to come down, avert your eyes)!

This one, chronologically or just logically, maybe should have gone in the beginning as an entrance to Coors Field. It's the Ball Arch (that's my name -- it may very well have its own name) and it's very cool. This is the second time I've taken a picture of it. 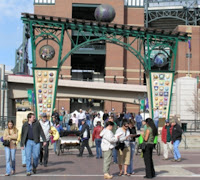 My mom did watercolours. She was good at copying things and was always looking for something to paint for me (is it any wonder I rarely knit for myself when my gene pool so clearly revels in the gifting of creative endeavours?) and after hearing how cool the Ball Arch was for the fiftieth time, she told me to get a picture of it so she could paint it.

Two seasons and about 14 games later, I finally took the picture. I don't remember if I ever gave it to her. To be honest, her enthusiasm for creative giving was a little overwhelming at times and I often felt... unworthy? Time consuming?

I never finished the scarf I started for my mother the year before she died. She never painted the Ball Arch for me. Both of these minor tragedies are my responsibility.

I know this is uncharacteristically maudlin of me, but the oddest things and the oddest times bring Mom roaring in. Today, the Ball Arch did it for me.

So hug your mom. Get on top of those little obligations that are hanging out there. Trite as it may be, once you've lost someone to the wilds of mortality, you can't overemphasise the fleeting qualities of time or the pain of opportunities lost forever.

This has been a public service announcement from your dear ol' AntiM.

Now back to our regularly scheduled programming.

**FOOTNOTE (unasterisked): Is Steve Finley related to Chuck Finley whose video vixen wife, Tawny Kitaen, beat the snot out of him with a high-heeled boot ten years ago? Now, woman-on-man domestic violence is probably no more laughing matter than man-on-woman domestic violence, but can you imagine the shit Chuck got in the locker room when the newspapers splashed the story that he had to call the police to protect him from his wife?

**FOOTNOTE (unasterisked): I made someone snork a mini-Snickers out her nose yesterday when I went to retrieve a Diet Pepsi from the freezer. I said, "I like my Diet Pepsi like I like my men: dark and ice cold." Thought I'd share, 'cause you're just the crowd to appreciate that.
Posted by Marin (AntiM) at 7:22 AM