First, with another "biggest in US history" tragedy looming, it seems frivolous to talk about my weekend. I'm going to anyway, but let me put this unfunny out first:
Some lives are worth more than others. On the political spectrum, that's either extremely right wing in a religious-all-God's-children way, or it's extremely left wing in a communistic way. Since I'm so middle of the road, that wide grey area suits me fine.
I know it probably won't be a popular opinion. We all like to believe that every life is sacred and you can't put a price tag on a life (and don't you have to, in some way, put a price tag to talk of value? Even a rhetorical, theoretical price tag?), but I firmly believe that the life of a 20-year-old angelic honour student is worth more than, say, Charles Manson's life. I think value is inversely proportionate to age, for the most part. Potential is a powerful force in valuing a commodity.
I'm wholly guilty of being blase (where is the fucking accent mark?) about tragedies that occur far away. But I get more involved with three categories: children, animals and youth. Children and animals because they can't do for themselves and youth because of all the wasted potential.
I'm sad for Va Tech. And I'm deeply sad over the loss of potential.
Now back to our regularly-scheduled mayhem:
First, I started this yesterday and it got into that rhythm like recounting a weird dream. No matter how fantastic and lyrical the dream was for you, your friends are glazing over as you say, "Well, it was Bob, but it wasn't Bob... I mean, he looked like a giraffe, but I knew it was Bob, ya know? And I was talking to him about the new house... well, it was me, but it wasn't me, ya know? And there was this parakeet..."
So I'm going to try to pare it down. This is my dreamy Friday and it might be glaze-over territory for you.
Eight years.

I went eight years with no touch, no tongue, no boy in my world. Now look at me.

Your dear ol’ AntiM is not a pretty girl. Oh, sure, the hair is intriguing, the eyes are blue, but on a good day, I can put forth a sort of peasant prettiness that says, “Let me tend your sheep and maybe sing you a lilting Irish ballad (but only if I think you’re not looking, ‘cause I’m terrified of singing in front of people).”

Seriously. It’s that Boy thing. The one where I smell toasted marshmallows and get all glowy when I’m around him. I really think I should just drag him along every time I want to pick up a guy. They fairly flock when he's around.
Friday, Kelley and I went to Favourite Bar. The Boy was there, and, of course, the only open seat at the bar was right next to him. Kelly and The Boy are now speaking again. Well, for awhile they were arguing. I watched a basketball game and tried to stay out of it.

[SUMMARY: This is the short version?]

Remember Hot Tamale Jason? The Boy invited him for a beer and he showed up in the middle of the peace negotiations.

Then Sex Toy showed up.

Then a couple showed up.
Two puppies (in their 20s) came in.

So begins the intricate mating ritual of the Urban Marinbird.

Seating order: Girl in couple, boy in couple, Marin, Kelley, Jason, The Boy, Sex Toy standing at the end of the bar behind The Boy, puppies at a table in the restaurant.

Kelley, Jason and The Boy start old home weeking and I watch more basketball. Boy-in-couple starts talking about the Nuggets. I throw in my two cents’. He says, “There’s nothing hotter than a girl who knows sports.”

Girl in couple… well, I can read in an instant on her face the litany of he wants sports/she doesn’t want sports throughout their relationship. She smacks him in the arm and stomps to the bathroom. He offers to buy me a drink.

Kelley sent me down the bar to talk to some of her friends. When I came back, the couple was gone and I was next to Jason. Jason and I flirted a little, then Kelley went to the bathroom. The Boy took that opportunity to tell Jason Kelley hadn't been speaking to him for three weeks. And to fondle my arm -- he was always good at the fondling thing. And rub my back.

“I may join you,” said Jason.
So I made my way through the crowd, went out and turned around to talk to Jason. Only Jason didn’t follow me. The Boy followed me.

And he kissed me -- he was always good a the kissing thing. And wanted to go home with me.
"I think I'm going back inside," I said.
On the way, I was intercepted by one of the puppies, who asked me to sit with them. I told them I had my friends, and looked over at my friends, but by then, all of my friends were in conversations and the bar was crowded, so I sat down with Steve-pup while Matt-pup went to get another beer. Matt came back and said, “That dude at the bar cut me off.”

“Y’all should go down to Three Dogs,” said I. “They’ll serve you there. It’s not quite so frou-frou. Probably more your kind of place.”

“You look like a hot chick sitting at my table.”

I walked them out, and on my way to the door, I felt hands around my waist. I hoped it was Jason, figured it was The Boy, turned around and it was… Sex Toy. Who nuzzled my neck and told me I smelled edible.

I sent the puppies to their playground and came back in, where Jason said, “I think I want to get that fresh air now. How ‘bout you?”

It was chilly. Jason pulled up the hood on his sweatshirt and The Boy came out. And fondled my elbow. And Jason said, “Man it’s so cold, I’m about to jump inside your shirt to get warm.”

The Boy went back inside.

I said to Jason, “If I give you my phone number, will you call me?”

[SUMMARY: There were boys -- ah, gods, the boys -- and touching.]
I switched to water and everybody else slowed down, except The Boy. Kelly drove me, The Boy clearly couldn't drive...

...so I drove The Boy's Jeep to my house and planted him on the couch. He started reminiscing. He requested I get naked. I requested he drink some water. He requested we cuddle. I requested he sleep. He did. I went upstairs to my bed.
2:31 am -- Private Name, Private Number. Ladies and gentlemen, for the very first time, the Male Lady spoke, forever proving beyond simple coincidence that she is the PNHead Stalker.
"Tell The Boy** I said thanks."
The phone woke The Boy up and I heard him puttering around, so I went to check on him.
"Are you sober? Do you want your car keys?"
"Are you cold?"
"Uh... no. Are you cold?"
"Yeah."
"Do you want to come upstairs?"
"Yeah."
So he came upstairs and wrapped around me -- he was always good at the holding thing -- and we slept, had a nice little chat in the morning and he left.
[SUMMARY: Taking The Boy home may not be the brightest thing ever, but it worked out OK.]
See? A nice, tight summary for the most part. I know I sucked a lot of the joy out of it, but (trust Marin) you're really glad I did. I was reeling from the attention and everything was moving so fast, like a scene from a Matrix movie. A touch here, music in the background, a comment there, I'm all emotional and giddy, the bar darkened, the lights whirling, Bob was a giraffe, glasses clinking, boys, boys, boys... 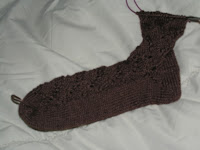 I stayed home and knitted Saturday night. I finished the heel and ankle on the Lacy Racy Bellocq and made progress on all the other 237 projects I have on the needles. Knitting is not as fun as the carousel of boy lust, but it's a lot less complicated and confusing and you always know about what you're going to end up with in the end.

*************
Kelly-with-a-Maren brought moment of blogdork joy to my attention. Being the limelight slut I am, I'm posting it here. I am nominated in four categories for Blogger's Choice Awards (Best Humour Blog, Best Hobby Blog, Freakiest Blog, Best Blog About Stuff). I have one vote in each category and some of them aren't even from my four loyal readers, so that's pretty tittilating.
If you go to the site and put theantim.blogspot.com (if you put in "AntiM and the Rickety Blog," it tells you there is no such thing and we all know better) in the search, it'll bring me up (you have to scroll down to the bottom of the page for some reason). Now, I'm not TOTALLY toadying for votes, but if you wanted to check it out... maybe vote...
Just sayin'.
**FOOTNOTE (asterisked): Actually, I'm German, but I look so Irish the comment still holds.
**FOOTNOTE (asterisked): The Male Lady uses his actual name.

**FOOTNOTE (unasterisked): Judge Jim is my new best friend! (see Sunday's comments) And Robin is lucky to have a man who UNDERSTANDS the crux of the issue.
Posted by Marin (AntiM) at 9:13 AM