And I don't really have a story that fits.

See, the theme is sort of "How far have you gone for yarn," and it's instigated by Charming Hostess Robin's husband, who I suspect has been involved (at least chauffeured [sp?]) some interesting yarn treks in his day.

So I'm suspecting his vision has to do with climbing the mountains in Tibet for the much-fabled Yeti Yarn, or a quest to the whitest north for a qiviut-alpaca blend (yeah, me neither. But now that I've said it, dontcha wanna fondle it?).

I've never gone way out of my way because I had to have THAT yarn. Usually, I work backwards from a pattern or what's at my LYS. I do have a story of angst, most of which you've read before:

I want to make a sweater. I picked the Dark Horse Fantasy Shaped Ribbed Sweater (everafter dubbed "Trojan Sweater" for the ribbing and the bad joke) from the December 2006 Knit'n'Style and went in search of the YARN CALLED FOR BY THE PATTERN. I know how narrow-minded that is, but I figured I could screw with the details on a project where I was comfortable enough with the process to feel I could make informed decisions. First sweater? Not poking the yarn gods with a stick.

Of course, in the Age of the Internet, the first thing I did was Google the yarn. I came across a place called the Yarn Barn that had a myriad of colours and seemed reasonable, so I put my order in. You may remember this part of the story too: evil yarn store owner says she'll have to special order, it'll be a week before I see my yarn, fine... two weeks later, she's pissy with me because I want to know if I'm ever going to see my yarn and if her store is prone to denying fibre geeks their heart's blood...

I cancelled the order, confident that I could get the yarn since they were now carrying it at A Knitted Peace. Of course, they didn't have the obnoxious shocking pink I craved, so I had to special order it. They told me it would be in the end of the next week. I was in the store that Thursday, right before the Yarn Harlot, asking if -- by chance, by any luck -- my yarn had come in.

The computer was down and they couldn't check it in. I could hear the yarn vibrating in the back room. I could SMELL it. I wanted to beg they take a ball band, take notes on what they needed and LET ME HAVE MY YARN.

But she said she wouldn't be able to until the computer was up. In fact, probably not even on Friday.

You can imagine the pain. I was beginning to wonder if this was God's way of telling me the Trojan Sweater was the devil's work and not meant for my idle hands.

I happened to be down in Littleton Friday and stopped in again. Just to check (read: be a pain in the ass and hope for the best). Two different women were there, and apparently hadn't gotten the Marin Yarn Moratorium memo and let me have the yarn, even though they couldn't check it in. They took notes. I hope they didn't get in trouble.

Of course, I have way too many things on the needles to start on the Trojan Sweater, but at least I have. my. yarn. 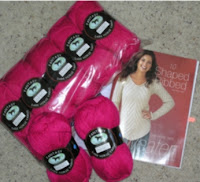 TOMORROW (or the next day -- taxes and all): Spanning the globe to bring you the constant variety of shitstorm...
Posted by Marin (AntiM) at 10:41 AM