The Redhead Always Starts the Barfight

The world has gone bananas. This morning my workaday world became a whirlwind of excitement and energy and, oh, yeah... WORK.

There was SnSnBnW last night, as evidenced by these two photos:

Taken early, while it was still light outside and the bar was well nigh empty.

Taken later, when it was dark and there were many, many non-knitters at the bar. 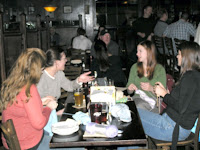 Do you see the look of befuddlement on the guy's face at the table behind us? Now, it may just be due to the flash in his eyes, but I like to think he turned to his friends and said, "Dude! Did you notice anything strange about this bar? Look around. I didn't know this was a knitter bar," he and his buddies slowly inching toward the door, hoping not to be mistaken for one of them... the knitters.

I also have this little SNL-style skit playing in my mind where a nice, clean-cut, possibly Mormon couple breaks down in the middle of nowhere and they hike a couple of miles in the burning heat for help, only to walk into a lively bar.

When they enter, it goes dead silent, all eyes on the newcomers. A tough-looking redhead (it has to be a redhead) slowly lays her half-knit baby booties on the table in front of her, stands to an impressive height** and says, "Looks like you folks are lost." The nice Mormon man gulps and moves slightly in front of his wife, as if to protect her...

Of course, this scenario would probably end with the nice Mormon couple being clothed in hand-knits within and inch of their lives, but I like the idea of the knitter bar as a place of mystery, wonder and more than a little terror.

As much as I love y'all and would like to stay and chat, I have a company to sell.**

[SUMMARY: I think I need my own TV station so I can do Knitter Bar skits and the Traffic Channel.]

**FOOTNOTE (asterisked): This is how you know the redhead isn't me.

**FOOTNOTE (asterisked): Yeah, not really. But it sounds more impressive than, "I have to go update some shit so someone else can sell this company and make a billion dollars."**

...**FOOTNOTE WITHIN A FOOTNOTE (asterisked): Literally.

**FOOTNOTE (unasterisked): Since you asked, I knit a little on a lot of things last night (The Heathers ["God, aren't they fed yet? Do they even have Thanksgiving in Africa?"], Sparkle Socks, Stupid Blanket) and I even counted to three after a beer without losing my place, my mind or a single stitch. All hail!
Posted by Marin (AntiM) at 7:35 AM