Hers was the first package to go missing in the Going Postal Debacle 2009. So in this week of showing off, stirring envy† and giving credit where credit is due, eca goes first. She's waited quite long enough.‡ [SUMMARY: Don't get me started on the post office.]

When the package was missing, I was particularly bummed about the notebook you see there on the bottom right. It's not stunningly gorgeous or cleverly laid out -- nothing you'd look at and say, "That's one spectacular notebook!" -- but eca got it during her brief and ill-fated stint in Kuwait, so it's an Exotic Notebook from a Distant Land. And that counts big points in my book.

Note how it opens backward and has Arabic writing in the upper right corner of each page.

[SUMMARY: I am a dork of the first water.]

Despite the excitement about the notebook, I think this was my favourite part of the whole package: 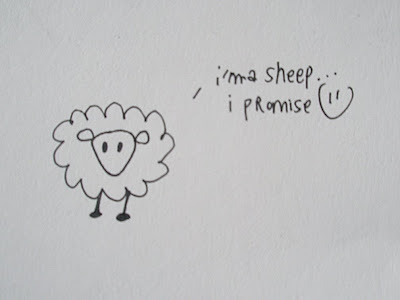 I plan to frame it.§

There are several useful little knitty bits, including a tiny knitting book,¶ "hand made" labels and these wonderful stitch markers. 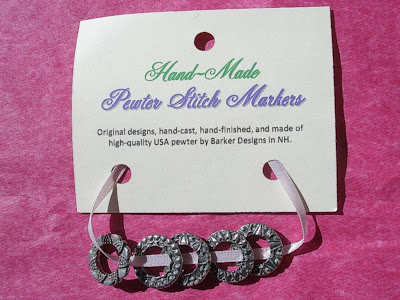 And, of course, when one knitter gifts another, there is often yarn involved. 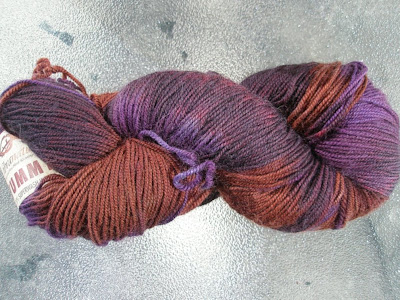 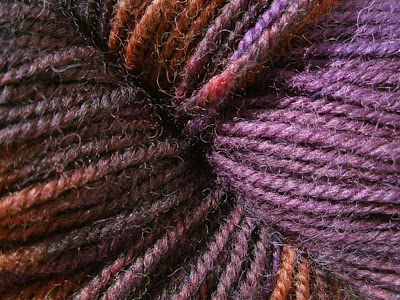 Fibra Natura Yummy in Purple Haze, with those amazing bumps of deep, rosy, reddy pink and gusts of aubergine. Which goes nicely with the Knitting Socks with Handpainted Yarns book.#

[SUMMARY: Theme packages are a thing of art.]

A big thank you to eca-elf, along with a hearty Na-na-n-na-nyaaa to envious knitters everywhere.

[SUMMARY: Wait... saints shouldn't stick their tongues out like that...]

Tomorrow: Yarn to kill or die for.

Marin says: Pleasantly, evocatively woodsy. And quotes one of my top three favourite Shakespeare plays,†† so it has that going for it.

Lion starts with pine and maybe a hint of lime. Then the oilier, sharper pine settles into cedar enhanced by pepper (to steal from Hans) and something sweeter -- maybe cardamom?‡‡ -- then I suddenly recognise the resinous and slightly smoky touch that gives its incense away.

None of the scents is really discreet. They're all complementary and interwoven and the change in scent seems to come more from a change of perception than in the various components drying off and wafting away to reveal their compatriots.

This perfume/cologne§§ has the distinction of being the first I've ever found that doesn't list any notes, so I can't play my normal game of Name That Smell. I can but tell you what I get.

Also? I wore this to the gym Saturday night.¶¶ It keeps close enough to the skin that a spritz in the ol' jogbra makes my workout much happier, but doesn't clobber anybody else.

Scents of dusty trails,
Of lightly sweetened ochre,
Of sun-weathered wood,
Of silence swept by mild breezes,
Of skies open like an endless azure cut oozing signs
of the coming storm.

(just for the record, here are Luckyscent's and The Perfumed Court's version -- see? No specific notes at all! Can you tell that as much as I like the perfume, the mystery of the missing notes is *really* turning me on?)

[I explained that I hadn't even looked up the notes yet. Not, as it turns out, that it would do us any good.]

EPILOGUE: Hans actually came into my office ten minutes later to ask if there was black pepper on the list. I believe his response to, "There are no notes listed anywhere," was, "Bastards."


†FOOTNOTE (crossed): I believe if you check the handbook, saints aren't allowed to indulge in envy themselves, but I think there is a loophole that allows them/us to bring out the envy in others. It's like a holy Bitch Test.

§FOOTNOTE (swerved): Not only is it cute and funny, it could be kinda deep. Isn't that what a wolf would say, were he dressed in sheep's clothing?

#FOOTNOTE (pounded): Which I do have. Did have. Actually might not have already had had I gotten the package on time, now that I think about it. Damned post office. But no knitting book ever goes to waste.

††FOOTNOTE (ddouble-ccrossed): One to read, one to stage, one to play the lead.

‡‡FOOTNOTE (doubble-crossssed): To name a random, sweetish spice I don't really know that well... but it's really good in that Indian rice pudding.

§§FOOTNOTE (that's me rolling my eyes): Because it's nothing if not unisex, and boys don't wear perfume.

¶¶FOOTNOTE (raising the holy banners): If I lost any saint points gloating (though, see †FOOTNOTE, above), I should totally get them back and then some for gymming on fornication night.
Posted by Marin (AntiM) at 5:20 AM

Labels: 2009 - the Campaign for Saint Continues, Boy do I have good news for you, Fibre, Knitting, Perfume Review