My Spidey Sense is Tingling 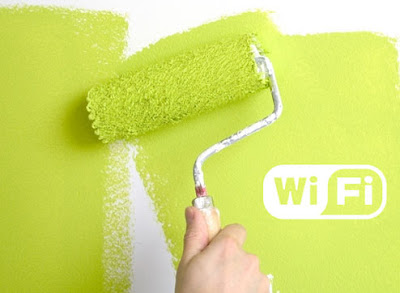 There are particles in this paint that resonate at the same radio frequency as WiFi signals, effectively blocking anyone on the outside from getting WiFi from your WiFi paint-coated room.%

If y'all had heard the saga of how I tried to set up WiFi in my home† for my month of medical house arrest,‡ you'd laugh at how badly I want this stuff.§


%FOOTNOTE (percented): I can't help the hackle-raising feeling that this stuff could make lead paint look like ice cream. Well, that and maybe living with the magnetic resonance could give me superpowers. I'm BatMarin!

‡FOOTNOTE (double-crossed): I spent three weeks trying to get the various systems to play together, then IT sent me two 25-foot cords and a router to connect them, so I ended up with wires everywhere. Cat for Scale thought it was the greatest kitty toy ever invented.

§FOOTNOTE (swerved): Why? Because I *can*. Just because it took me seven years to get a new cell phone doesn't mean I'm not still a tech whore at heart.
Posted by Marin (AntiM) at 1:41 PM