Amphetamines Give You Wings!

Yesterday, my tallest, hairiest nephew (older, wiser brother to the inimitable Dr. Doom and son of my only brother**) learned the joys of french fries dipped in caramel sauce. He also dipped his McNuggets in caramel and thoroughly enjoyed it, but I hesitate to use the word "joys" with that one. It looked gross to me.

And the indulgent aunt? When he said "A ten-piece McNugget meal, an apple dipper, a yogurt parfait... is that too much?" said, "No, of course not. Whatever you want." Darned if he didn't eat it all, too, leaving only a bunch of fries behind. 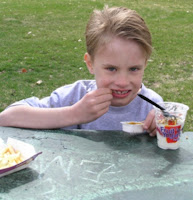 He did some tree climbing 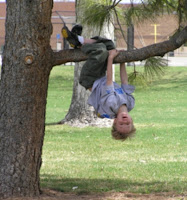 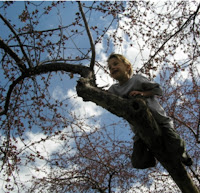 Then we went to Wings Over the Rockies, where my dopey nephew spent five minutes following a ladybug when there was outlandish aircraft to be perused. Ah, well... it was his day. 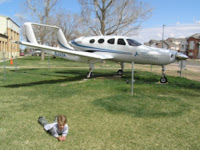 He was very impressed with the X-Wing and told me all about how Luke Skywalker flew it. I just let him talk. Why tell him his ol' AntiM was cool enough (or dork enough) to have seen Star Wars in the theatre the first time 'round? 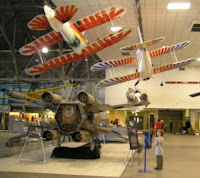 We got all educational in the Radio Room, what with the telegraphs and the trainer (just so y'all know, the plane nearly crashed moments after this picture was taken, but Tallest Hairiest Nephew pulled it out just 12 feet from the ground. I know because he told me so). 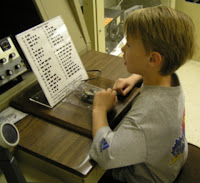 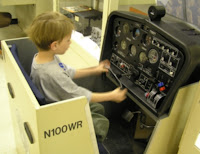 Then I got all educated my damnself when I learned there were phones with memories in the SIXTIES. Is it weirder to see that plug-in punch card or a dial? 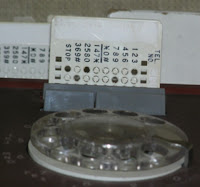 [SUMMARY: Wings Over the Rockies can be a really good learning experience, 'specially for the otherwise-indulgent aunt who spent all afternoon reminding exuberant nephew not to touch the planes, then woke up, bolt upright at 4:00 this morning realising... why the hell not? It's a flippin' airplane, not a Van Gogh... Don't touch the giant fighter plane? What was I thinking?]

We washed the MiCo. Before you call Family Services with tales of child labour violations, I'd like to stress that *he* made *me* wash my car. I did *not* make him wash my car. I tried to explain that my car wants to be a Jeep and really loves the mud and he solemnly informed me, "She does *not* want to be a Jeep. We should have a snack, but we should find a car wash first."
The middle shot of the before-during-after series? He is trying to lift both legs up, hoping the pressure of the hose will make him fly. 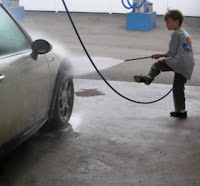 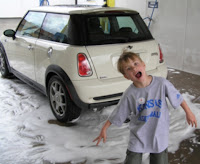 [SUMMARY: A nephew who proclaims the little car "probably the coolest car we'll pass all day" can still be embarrassed by an abundance of dirt.]
Then I went home and crashed, because kids are exhausting, even when you don't have to literally chase them all over the place.
Just wait 'til I take Dr. Doom to the zoo in the next couple of weeks. I may need a steady infusion of vodka and amphetamines for that.
In other news:
The Boy had a long talk with the Male Lady yesterday. Kelly called early this morning to impart the news. OUCH.

You know why that hurts so horribly? Because I was good to him. I was laid back and honest and receptive and warm and not pushy. I asked very little and demanded nothing. I drove all the best people in my life up a fucking tree with my neurotic obsession with him, but I left him out of it, and he just stopped talking to me (even though he promised he'd never do that to me). She's a fucking freak show stalker psycho bitch and he *talks* to *her*. He WORKS THINGS OUT with her.
Do boys really like psychos better?
Kelly's pissed 'cause he told Male Lady, "Kelly didn't want to be your friend, she just wanted to be civil," which was totally true, but it smacks of betrayal, Boy to Kelly, and... well, Kelly's pissed. A little hurt, too, if I'm reading her tone of voice right.
Kelly and I are going out Friday night. Do you think it would be too much to ask her to invite her hot tamale friend Jason along?
[SUMMARY: When I'm not just plain crazy? I'm boy crazy.]
I knit (well, *finished*) SIX ROWS of the Stupid Blanket last night watching Top Model. Now, I technically knit seven-plus rows, but something got wonky and I had to tink, then I found it wasn't wonky, it's just the way the linen stitch looks close to the needles and I tinked for nothing and almost gave up in disgust but pushed on through another two completed rows because that's JUST THE KIND OF FOLLOW-THROUGH I HAVE.
I'm so pissed about The Boy I'm yelling about my fucking knitting.
I'm halfway done with the Heathers ("Now I've seen a lot of bullshit... angel dust, switchblades, sexually perverse photography involving tennis rackets...").**
Get this: I ordered Gloss yarn (the Cocoa -- I think I'll use a pink ribbon) for the Bellocq Stockings from Knit Picks, where they provide package tracking numbers for your obsessive convenience (OK, my obsessive convenience) and I checked Friday and it said the yarn was in Denver! Hallelujah! And it wasn't in the box on Friday. And it wasn't in the box today. And I checked the tracking today and this is what it looks like:
March 26, 2007 - 3:00 AM - Sortation Center Departure - DENVER, CO
March 22, 2007 2:55 PM Sortation Center Arrival - DENVER, CO
You know the old saw about those who love law and sausages? Well, I'm pretty sure no mail-order afficionado needs to know her freakin' package gets to her house five days (or more; we'll have to wait and see if it actually shows up today) after it reaches her city of residence. Maddening! From now on, I don't think I'll look at the tracking unless something doesn't show up for three weeks. My new Gloss yarn is so close I can taste it... and nuzzle it and sniff it and...
[SUMMARY: Obsession can be an ugly thing in all its myriad forms]
**FOOTNOTE (asterisked. No, seriously -- way at the top of the post. You go look. I'll wait here.): Yes, brother, I noticed you added me to your bio (and for those of my loyal readers out there, don't y'all believe him -- I wasn't in the slightest bit ruffled when I WASN'T mentioned, he just wants to expand the myth of my lunacy that much further by saying I'd be very, very angry not to be part of his capybara-laden bio). I also noticed I'm now a link on his link list. The knitblog is a powerful tool in sibling relations.
**FOOTNOTE (asterisked): HAHAHAHAHAHAHAHAHAHAHAHA! Still funny....
**SPECIAL BASKETBALL FOOTNOTE (unasterisked): You'll note Tallest Hairiest Nephew is wearing a Kansas shirt. When I dropped him home, Dr. Doom was also decked out in Rock Chalk gear. Turns out the brother (he loves Kansas the way I love Duke, though he is less likely to sleep with one of the coaches) ordered shirts for the family with an eye to wearing them during Final Four activities this weekend. It's a perfect time to quote Sir John Vanbrugh: