Thought I was going to blow.

I'm exhausted, my friends. I'm just going to give it all to you straight. Well, as straight as my fuzzy little head will allow. But there are knitting pictures, so everything will be alright.

Last night was a pretty good evening to be a Marin.

I walked to Other Favourite bar to catch the first halves of the first games and have a beer. Then I walked to Posh, my homeLYS, for Stitch n Bitch. Would you believe... well, remember how the first (last) time I went, it was a bridal shower of some sort? And there was food and wine and stuff? Well, I managed to show up for a baby shower this time. My timing is impeccable.

I got pictures this time, albeit bad ones. I was trying hard not to be obnoxious and obtrusive and just didn't take the time to set up and focus, even for a second, so, say, Mary Kay wouldn't have to be photoshopped with the sharpening tool until she looks like a Vermeer (not necessarily a bad thing, just a thing I wasn't aiming for) or Heather wouldn't have snacks growing out of her head. So apologies, as always, to all but the Male Lady when I dork your photo.

It doesn't necessarily mean I don't love you anymore.

Heather, 39.57143 weeks pregnant, with gift on belly and snacks growing out of head 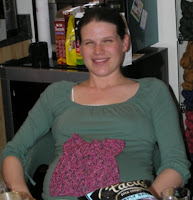 Isn't she all glowy? Even with the snack-head thing? That tiny little garment on her bump (is it still a bump at this phase? At what point do molehills become mountains? Other than when there's an AntiM obsession involved, I mean.) is the cutest little dress that's ADJUSTABLE (genius!). Mary Kay crocheted it for Heather out of (I believe I heard) sock yarn.

Mary Kay, my new best friend from last time, happy amid the yarn, very Girl With the Pearl 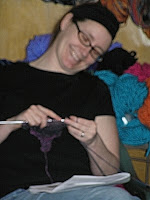 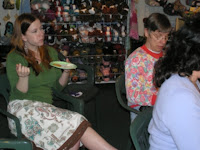 In re: Janet: Janet was kind enough to introduce herself and her mother-by-proxy (Irma) to me. Now, I had two pictures of Irma that were bad enough that I simply couldn't do it to her, couldn't post them (given the calibre of the photos I *did* post, you can imagine... poor Irma). She's a lovely woman and deserves better.

In re: Red: Red is to a blogdork what Dan Quayle was to comedians. And I mean that in the best possible way. You'll be hearing more about Red. I just have a feeling. If nothing else, Red is our resident Sex Toy Distributor to be.

The Naughty Librarian and Red 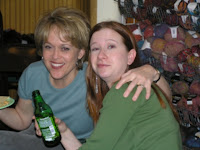 All apologies to the Naughty Librarian. She was loads of fun the first (last) time I went and loads of fun this time and I've never managed to catch her name. But she really is a librarian. And I'm pretty sure she's naughty.

[SUMMARY: I may do more bitching than stitching and maybe should take fewer pictures or have fewer beers.]

Huh. I had a picture of Sylvia, too. Not a good picture, and she's probably just as happy I somehow managed to leave it on the home computer, but... I hate getting old and feeble.

Sylvia owns Posh and she's just as fun and lovely, warm and fuzzy as a yarn shop owner should be. I called her before I left work yesterday. It went something like this:

(Remember my first phone call to Kelley? Not as emotionally fraught, every bit as fucking painful.)

"That's OK. I'll still talk to you." Because that's just the kind of generous soul Sylvia is.

"Do you have blocking pins?"

She doesn't, really, and by the time I left the office, I realised I had a choice to make: trip to fabric store for t-pins or trip to bar for basketball. Guess which I chose?

I did go to the grocery store and bought regular ol' straight pins. It wasn't the best solution. And I blocked MBBO on a towel, which meant the pins didn't really get anchored so well. 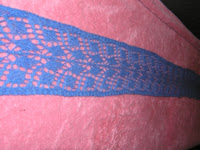 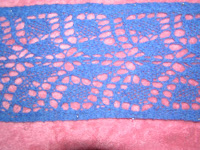 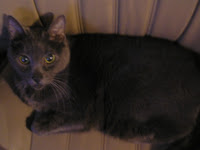 I think this scarf is pretty forgiving. Maybe most blocking is. Maybe it doesn't matter if you don't end up with a picture-perfect geometric marvel in the blocking phase. I dunno. Never blocked before.

In any case, MBBO didn't fight the pins, so stretching it out and leaving it pretty much did the trick. The pins were just this side of incidental. And would you believe... it's actually is 60" long? I never would have thought it possible. Imagine what I could have done with the right tools. Next time, I'll definitely use a sheet instead of a towel and longer, sturdier pins.

I'll try to get a pic of Kelley with the MBBO tonight. If she's lucky, before cocktail hour. That may be the key to good photography.

I also am nearly a third through the Heathers. You know what that means:

"Killing Heather would be like offing the wicked witch of the west... wait east. West! God! I sound like a fucking psycho."

I'm pretty sure I'll run out of scarf before I run out of good Heathers lines.

Wednesday? When I went out with Kelley? She said, "Oh, yeah. The Boy said to give you his phone number."

So I have his number. It sits in my phone as I sit and wonder. Shooby-dooby-doo.

I did the accidental stalker thing this morning. We were 10 miles from our home turf and I just -- pure chance -- ended up behind him on the road, then passed him when he waited to make a left turn. I suspect he saw me. I suspect he knew it was me. I suspect I'm going to obsess about this for *days.*

Sheesh... all these months avoiding Favourite Bar, never going to the grocery store when a Jeep is in the parking lot (This is Colorado. There is a fuckload of Jeeps here), afraid to drive down 38th...

It was all work-related. I swear. But can you imagine the phone call?

"Um, hi, I'm not stalking you. I was working. I have your phone number."

[SUMMARY: The only thing more important than Heathers quotes is Boy angst.]

My current client is in the middle of sales presentations to potential buyers, and every dog-and-pony show is well-catered. Here is my lunch from yesterday: 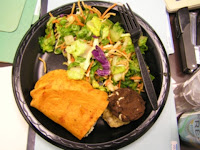 It's BBQ Friday. I'm leaving you to go eat.

**FOOTNOTE (asterisked): Office Space. I'll probably have to knit something and call it "Office Space" so I can do Office Space quotes once the Heathers ("Transfer to Washington. Transfer to Jefferson. No one at Westerberg is going to let you play their reindeer games.") quotes run dry.