Hey! I went to my first Stitch 'n' Bitch last night! Here! Right in my own neighbourhood!

It was kinda weird.

I liked it, don't get me wrong. Liked it a lot. But I walked in and there were eight or nine knitters drinking wine and eating cake and stuff (turns out they were celebrating the marriage of one of the regulars -- they don't always have lots of wine and cake. I don't plan on letting this be a factor in my attendance).

I sat down in the only available chair and... well, I'm pretty reserved in groups of strangers. If nothing else, I try to keep in mind how much I don't want to fuck everything up from the git-go by saying "fuck" or talking about sex toys or saying something accidentally anti-feminist (all things I seem prone to do in casual conversation).

I was brave, though. After a little stretch and a good warm-up, I jumped right in. Like I belonged. And they were very receptive. And one of the chicks is contemplating a second job in direct sale sex toys, so I was so off the hook on that potential mine field. So far so not-shit-in-the-punchbowl, right?

The weird: Only one person asked my name or introduced herself. When I was on my way out.

Yeah, I could have just bounded in and said, "Hi! I'm Marin! I'm your new best friend! Where do y'all keep the sex toys while you're cooking dinner for your fucking husbands?" But by the time I got over the reserved portion of the evening, it seemed even weirder to suddenly introduce myself than it did to continue to glean people's names by collecting them on the sly. And I probably talked to ten women last night. (Shouts to my new best friend, Mary Kay, who may be the only one who knows my name. Mary Kay, you wanna have drinks with Kelley and me and talk about The Boy? I'm your new best friend!).

At one point, we were discussing TV (bleagh... another potential shit-in-the-punchbowl arena for me, since I watch waaayyyyy too much TV and not nearly enough of it is PBS and admitting that to some people is like saying you think Hitler had it right all along) and one nameless, unintroduced knitter asked another nameless, unintroduced knitter, "Well, do you TiVo it?" and the other person admitted not having TiVo and there were shocked exclamations... I said, "I love TiVo. TiVo changed my life. I didn't even own a TV for six years and now I watch, like, 90 hours of television a week. But good TV. TV I want to watch."

First, I'm very happy nice Nameless Ones didn't cast aspersion my way for my deplorable anti-intellectual practise. Second, this opened the gate for talk to turn to all the non-PBS television everybody watches. I can't tell you how liberating it is to be able to admit in public that, horrifying as it is, I can't keep off the crack pipe that is America's Next Top Model.

The conversation naturally turned (totally natural. If you were there, you'd agree) to how American Idol is screwing up the Bones and House schedule on Fox. I launched.

"I keep thinking my Comcast DVR is simply failing to record Bones and House. I looked yesterday. No Bones. No House. It's Wednesday, right? So there should be Bones! There should be House! I'm sure the nice little customer service people at Comcast don't understand why I can't check a TV schedule now and then. Now when I call, they don't even ask my name and account and all that. They just say, 'Marin, American Idol was on last night. Bones will be back next week. Thank you and please stop calling Comcast.' "

I thought I was really clever throwing my name out there as part of the story (and an integral part of the story! Not forced at all! See how funny it is that she calls Comcast so often they're all on a first-name basis with her? Ha ha!), yet nobody else seemed to pick up on it.

[SUMMARY: Stitch'n'Bitch is cool, though nobody knows my name like I'm some ancient god or something (not that I'm granting myself godlike status, just the "O Nameless One" element), knitters may watch too much TV and be too involved with their sex toys. I am obsessed with my own cleverness.]

Still, it was soooo nice to discuss the merits of various needle materials, how well (or not) different brands of circular needles work, how easy it is to dork a k1p1 rib when you're switching from a linen stitch... and the girl beside me? Knitting a thank-you scarf? Asked my opinion. Now, I told her I liked it and she was ripping it out a couple of inches later for the not liking it herself, but I have the great good fortune of not having my ego bound up in someone else's scarf, so I was perfectly happy with both her decision and my original opinion. 'Specially since someone actually asked my opinion.

And they called the baby blanket "beautiful" and that makes me happy. And they fully understood why I've taken to calling it the Stupid Blanket. Because knitters understand the pain of 1500 stitches-to-the-inch of mind-numbing linen stitch that is made all the bitterer (yeah, I said it) through knowing the only reason you did the linen stitch was for the cool woven quality on variegated yarn and this yarn isn't so much variegated as long-repeat STRIPING, like changing colour every inch-and-a-half over 26 inches and you could have just used an easy garter stitch and it'd all be done (all 112 gazillion stitches of it) by now and... "But it's so pretty in the linen stitch. It's beautiful."

All in all, a group of funny, intelligent, personable, friendly women (and I expected no less) who didn't get upset when I talked about sex toys and television. Notice how I put "funny" first. Love the laugh thing.

I didn't take the camera because I wasn't quite sure how potentially not-knit-blog-friendly knitters might feel about the new chick pointing a camera at them and telling them she's going to put them on the Internet. Probably to illustrate a post in which she seems obsessed with how weird they are.

Knitters always have pointy objects. It's not good to piss them off.

So I'll do it next week. Not that the situation will have changed much, but at least we've all discussed our sex toys so we're not SO uninitiated.

[SUMMARY: I may not have taken your picture and you may not agree with with my taste in bulky, ribbed thank you scarves, but I'm your new best friend!]

Speaking of knitting, here is the sweater I'm going to knit.

I may call this the Trojan Sweater -- ribbed for my pleasure. Such an old joke, so not original. (Knit 'n' Style December 2006) Note how it's done in a staid and elegant off-white colour that gleams softly in the available light and shows the rib pattern off to perfection? I'm doing it in shocking pink. Colour number 30, below. 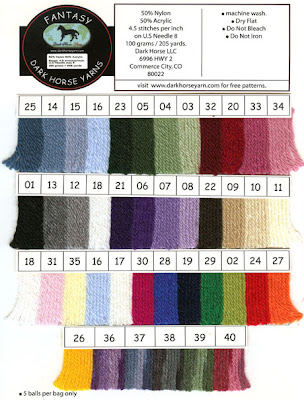 Hey, they (Well, mostly my dad's sisters) tell me I look good in shocking pink. They may just be scared to tell me otherwise ("Back away slowly from the crazy lady in shocking pink sweater... say something nice... they can smell fear, you know... and they carry pointy things...")

Kelly news flash ('cause I know y'all were just wondering, and what's a blogday without Kelley?): she called yesterday. I didn't get to call her back, but I'm going to go do that next and we will have drinks tonight. Oh, yes, we will have the drinks.

What a sad little excuse for a post. As a reward for sticking with it, I'd like to present you this pretty picture I took my ownself. Everything is better with a frog.

Come on over to my pad, baby -- we'll get crazy on the flies and party 'til we croak! 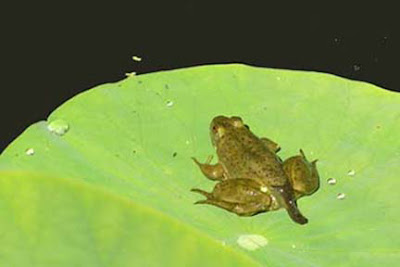 **FOOTNOTE (unasterisked): Knitting news flash ('cause y'all are lucky): when I Googled for Dark Horse Fantasy to show off my level of shocking pink class and sophistication, I came upon this cool site. Now, it's all about crochet, but crocheters use yarn too, so there's some sense of comeraderie. I will be going to the cool site right after I hit "Publish" to see what's up in the world of yarn review.

[SUMMARY: Some footnotes aren't worth the blogpaper they're printed on, but frogs can make everything better.]
Posted by Marin (AntiM) at 8:33 AM