Scenes from a Maul

I still haven't blocked anything in my whole knitterly life.

Yes, there was alcohol involved (Grey Goose pear -- totally worth it). I will give you a little teaser with the UNblocked Medium Blue Branching Out: 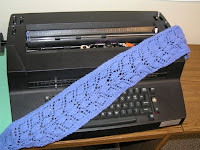 It lounges on the typewriter in "my" office. The typewriter sees a lot of action because the only other typewriter in the office is some sort of legal typewriter that has a weird, misplaced key that manages to piss everyone off, so I bask in the illusion of great popularity as people traipse into my space to use the only non-pissing-off typewriter.

Seriously, I have to block this thing tonight (after SnB -- I'm finally going back after my Wyoming/Brown Palace hiatus) 'cause I promised Kelly she'll have her scarf when we go out Friday (cocktails, possibly an Old Navy field trip and a viewing of that "Reign" movie with Don Cheadle and Adam Sandler, followed by more cocktails, in case you were wondering).

Yeah, socialising with the Male Lady. And I got pictures.

Lauryn is doing this "Tuesdays with Morrie, Wednesdays with Lauryn" thing where she has a jewelry open-house once a month on a Wednesday night. Kelly and I got there early for the best pickins last night and this is what I got:

The blogcliche (accent! Where is the accent?) Picture in a Bathroom Mirror -- I've been dying to do that -- of the necklace that I can't believe I even tried on, but absolutely love and made it mine 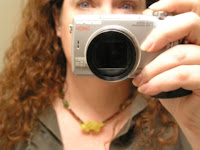 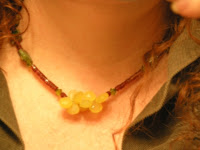 Doesn't that little cluster of yellowy crystals in the middle look biological? There's something... alveoli-ish or ovarian or white blood cellesque about them. My photography wasn't the best, but those green things up from the biohazard cluster are squares. I like squares. I have a weird little thing for squares. 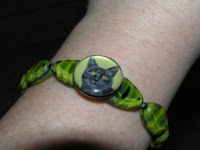 Yes, I bought a bracelet because it had a kitty that looks like my kitty. What kind of single girl cliche (accent!?) dork cat mom am I?

A couple of other chicas showed up (Kelly knows them all -- Kelly is *connected*), including Male Lady. You know how in Young Frankenstein the horses always go off every time Frau Bruja's name is mentioned? That's kinda the internal reaction I have to Male Lady.

New Girl Jenny showed up, too. Jenny is cool and is really only new to me, since Kelly and Lauryn and Male Lady all know her. Jenny and I probably sat barstool-to-barstool before, but we've never been formally introduced.

Jenny had wicked funny stories to tell of a bad, bad date, so we all gathered 'round the fire and I took pictures. 'Cause I know y'all are itching to see Kelly and Male Lady. They're practically old friends of yours by now.

Cool New Jenny on the left, my beloved Kelly on the right 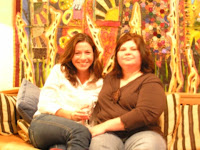 SIDE NOTE: Lauryn's whole family is apparently wildly artistic. You can't see a lot of it, but that thing behind Jenny and Kelly is this amazing quilt/collage/painting thing that Lauryn's mom and various female relatives made that displays a family history. It's big and colourful and complex and multi-media and just GORGEOUS. I went into kitty toy mode and stared at it for a long, long time.

OTHER SIDE NOTE: Lauryn and Lou Ann (her roomie and the chica that was getting fondlish with The Boy Saturday night, not that I'm still obsessing about that) have these cool little paintings by a Denver artist named Hyland Mather. The paintings are Little Guys, and... well, go see them for yourself. How cool are they? At $20 a pop, I'd even call them downright affordable. 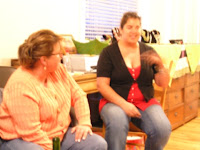 And the Male Lady, in all her Roethlisbergerian glory 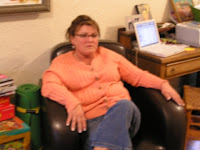 That's the photo you need to give to the police when my poor battered body is found in a shallow grave along a Wheat Ridge mail route.

Two mildly funny Male Lady things, then I'll get off that particular obsession and move on to something other obsession:

I couldn't look at Kelly. I would have burst out laughing and ruined all pretense of being a normal, unstalked human being. Then what would I talk about here?

[SUMMARY: Grrrl Power! Plus Male Lady! And dorkcatmom jewelry! A fine evening, which could only be improved upon by...]

A trip to Favourite Bar for pear-flavoured Grey Goose. 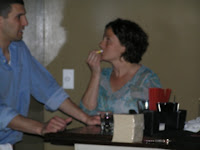 From the small world file: My brother and his fam used to live in a duplex, which they eventually sold to the owner of the other half of the duplex, who then rented it to Sue. This means my sister-in-law actually knew one of my favourite bartenders before I did. This seems somehow out of character with the universe, but I'm willing to chalk it up to one of those quirky little things. Chaos Theory.

Sue's mom was in town from North Carolina and Sue introduced her to Kelly and me.

"Nice to meet you," said I, "North Carolina? I'm rooting for your team! I have NC and Kansas in the final!" (I'm your new best friend!)

Fortunately, Sue works in a bar with a TV and her mom is... well, her mom is from North Carolina and totally understood and appreciated. But I can see how this may have gone wonky, socially speaking.

So I got home just after nine and there were no pins to be had so no blocking was done.

Tie your shoes, hide the pets, I'm about to get weird on your ass (no! AntiM, not you!)

My knitterly consciousness is overcome with lace knitting. While knitting the Medium Blue Branching Out, I started wondering if there was any possibility that I could design a pattern of lacy shamrocks. I can't tell you how insane I think that is. I am not a designer. I knit from patterns. Designing seems... highly advanced.

I'm going to take you on a little tangent, but it'll all come right back to the lace thing. Promise.

I have always been able to memorise information -- lines, verb lists, poems -- quickly and well. But when I've studied languages and music (and I guess acting falls in this too, though I think my process for acting, language and music is the same everybody else has for acting anyway), I tend to spend the first part of the learning curve in rote memory. Somewhere along the way, though, I *feel* the thing. The playing/speaking/acting becomes intuitive and colourful, rather than just straight off the list. Then I'm good at what I do and it becomes a real pleasure to do it.

You see where this is going, right?

I'm wondering how much lace I'll have to knit, how close I'll have to hold my patterns, before I can knit lace by love and intuition rather than bird by bird. Eunny Jang, once and future editor of Interweave Knits, knits so emotionally and intuitively that I'm both jealous and inspired. She has a whole series (check the lessons on her sidebar if you're interested) on learning the feel and rhythm of lace knitting so you can be free of patterns. She says if you know how a yarnover builds on the stitch below it, and how it will grow into the pattern ten stitches above it (kinda like playing chess, but with yarn), you won't need to mark your place in your knitting, on your pattern... lace will take on a pleasant, elegant rhythm of its own and you'll just *get it*.

I want to be there. And I know if I get there, I'll be able to design my own shamrock lace. And my own dragonfly lace (because I want that too). Maybe my own hedgehog lace (because I'm a freakin' dork). But how long will it take to get to a point where I'm off-book and processing the music through my soul instead of my brain? Will I give up before I get there?

In any case, I'm planning on knitting the Print o' the Wave stole almost immediately (must. keep. working. Stupid. Blanket.**), provided someone can get me into even the bird by bird of it and explain the math that looks all wonky to me. If anyone has knit it, could you let me know? I have questions.

[SUMMARY: Lace knitting makes me all emotional and poetical and shit. I need help. No, seriously, I need to know how the 80 x 204 stitch center panel can possibly be edged with the picking up of 80 x 240 stitches. If I get my sister-in-law the PhD in Applied Mathematics involved, well... I'll end up in a fetal position sucking snot. I need knitter math here, people.]

**FOOTNOTE (asterisked): Poor Stupid Blanket. The blanket isn't Stupid, I've made it Stupid. I've fallen in love with other projects and much maligned it, but it is a labour of love and it is pretty and special. It's just so not lace right now.

**FOOTNOTE (unasterisked): Poor photo subjects. I apologise to all the victims (OK... probably not Male Lady, but the people I like) of my camera. My camera's been having focusing issues lately.