Let's hear it for my HOA. When Denver was suffocating under a foot-and-a-half of snow between Wednesday (Dec 20) and Thursday (Dec 21), nobody shovelled us out for three days, despite the facts that a) everybody knew the snow was coming and was going to be big and they should have been well prepared, and b) it stopped snowing Thursday morning and there was no excuse for leaving snow stagnating in clear weather. Now, I'm a bitcher (No, AntiM! Not you! Say it ain't so!). I bitched at the management company, who didn't even know the snow guys weren't doing their snow guy thing. The snow guys *told* the management company they were going out at noon... and at noon the next day they still hadn't so much as breathed heavy in the direction of our little covenant-controlled corner of the 'hood.

They had so many complaints that they went WAY too far the other direction: unnecessary 24-hour snow removal for the next snow a week later. We're talking big equipment, people. I wish you were here to hear my impression of middle-of-the-bloody night in my 'hood during those times:

This bit of genius (the 24-hour snow removal genius) inspired snarky signs all over the 'hood warning residents to stop threatening violence and legal action (I am not making this up) against the snow guys or the snow guys would go home and... no snow removal for you!

They've since mellowed into a system wherein the snow guys come somewhere between 10:00 pm and 2:00 am, run a snowblower and a mini-cat with a plow for an hour (and I've watched a couple of times -- one or two swipes with motorised equipment seem to both clear all the snow and take only about 15 minutes), take a long break (in which I'm sure they partake of the ganja. I'm not judgin', I'm just sayin'), then start up again (waking up the finally-sleeping populace). Turns out they hired these guys to do overnight snow removal because it's cheaper than the daytime kind of snow removal.

How do I know this? I bitched at the snow guys at 2:00 one morning and they... um... *explained* it to me, as only two stoned perverts jousting with snow shovels in the freezing dark can do. Use your imagination.

Also, I can only assume they're being paid by the hour because it takes four guys with a snowblower, mini-cat and (at least) three snow shovels at their disposal four or five hours to clear three square blocks of sidewalk.

I could do it by myself with a garden trowel in less time.

I am covetous of sleep. I love my sleep. I was an insomniac for almost 30 years, so I'm picky about sleep. I can't sleep with backup alarms (I hate backup alarms) and snowblowers under my window.

In response to their ill-conceived snow removal system, I've developed my own system. I turn on a fan to create a volume of white noise sufficient to blot out the aural blight of snow blowers, snow shovels and stoned men yelling off-colour jokes to each other across the dark and empty streets. I woke up at 2:40 this morning, toddled off to pee (because it doesn't matter how little fluid is in my body or how many times I've peed in the last four hours, as soon as I wake up, my body needs to pee) and noticed how freakin' cold it was with the fan on. I peeked out the window to see clean, empty sidewalks and no snow guys, so I turned off the fan. An hour later? "Hey, Manny! What do you call a squid with a yeast infection?"

*rrrrrrrreeeernrnrnrnrnrhhhhhhhhnnnnnn* (snowblower -- sounds a lot like the heavy equipment, but whinier and with no backup alarm. I hate the backup alarm.)

I guess they came back from their smoke/toke break to... oh, who knows what they do? Admire their work? Do like I do when I wander into the kitchen and can't remember why? ("Huh. What do you suppose I came here for? Dang. I guess I'll shovel this snow...")

[SUMMARY: If I were running the world, snowblowers and backup alarms (I hate backup alarms) wouldn't keep me up all night, yet the snow would get removed. I think there's a vast middle ground between the two ends of that particular spectrum.]

I turned the fan back on. I'm tired this morning.

But I have knitting pictures, so it will all be better soon. 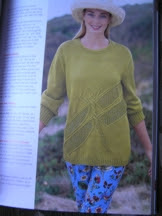 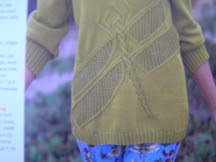 I also have a picture of the lovely ribbed sweater from the Knit 'n' Style December 2006 issue that I'm going to knit BEFORE the Problem Dragonfly. It's lovely, in a lovely yarn (Dark Horse Fantasy -- isn't that a lovely name?), but I left the lovely picture on my lovely home computer, or possibly in my lovely camera, so you'll have to use your imagination for now.

Here are the WIPs: 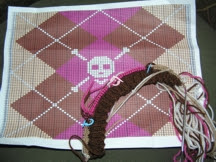 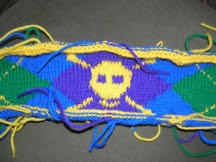 I don't much care for variegated yarns because they so often look homemade in that not-so-good homemade way that evokes home perms and ballerina toilet paper cozies from the 70s, but I discovered (thanks to the magic of the Knitting Pattern a Day Calendar... thanks Aunt Chris!) that variegated yarn looks really cool in a linen stitch.


For example, linen stitch front... ... and back (it even looks really cool on the back. Love that). ...so I was very excited when my cousin picked a variegated yarn (it's Plymouth Encore -- she was looking at cashmere, but who needs a baby blanket that needs to be dry cleaned?) and figured I'd whip out the old linen stitch and really impress the not-knitters, but... 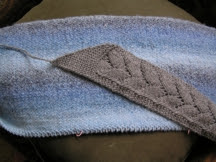 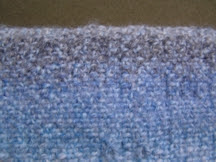 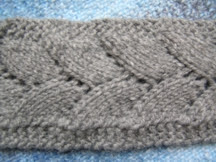 It turns out this yarn has REALLY long repeats (look at me, using the knitting lingo) and it stripes more than it linens. I probably would have gone with a nice, quick garter stitch if I'd known, but I feel I'm too far gone to frog it back now. Not to mention what a pain in the ass it would likely be to frog a linen stitch. In fact, it wouldn't go "rippit, rippit" in that smooth slip-stitch way we know and love. It'd be like riding a razor scooter on shudder bars: "Bam! Fuck! Bam! Fuck!"

Here's a tip from your ol' AntiM: if you're one of those people who has two (or three or twelve) projects going at a time (possibly because you have a short attention span, possibly because you're industrious, possibly because you want to knit all the yarn and all the patterns and this is the only way you see this happening), don't toggle between a linen stitch and a k1p1 rib. You may lose your ever-lovin' mind. You should see the tragic message I sent to the Yarn Harlot the day I did this. Nobody has time for that kind of whining, but I don't have knitty friends, so I had to piss and moan in the general direction of someone who might feel my pain.

Very little sock (plus cat for scale)... ...some yarn my nephew got me, kinda scarfy 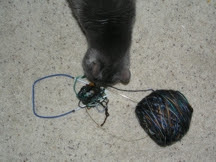 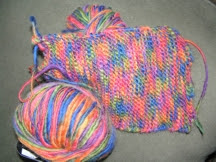 That's "very little sock" as in "I have knit very little of this sock," rather than "This will be a teeny-tiny little fairy sock. Look! It's almost done!"

My nephew picked out the yarn all by himself. It think it was very brave of his mother to take him (a four-year-old at the time) to a yarn store that, while I love it, it doesn't love kids. That yarn has been sitting for two years while I try to figure out what to do with it. I don't know if you can see it, but it goes from thick to thin and back again -- I tried to do the linen stitch trick with it (since it's variegated, don't ya know), but it ends up looking like a six-fingered, mentally challenged person knit it at day camp. All uneven and lumpy and stuff. So I decided on a simple garter stitch scarf.

Those last two items have something in common: I took their pictures yesterday afternoon and frogged them all the way back to yarn balls before Book Club (yes, I finished the book, yes I provided snacks. Good ones. All is right with the world). I decided to do the Feather and Fan socks from "Socks Socks Socks" because I've seen some lovely results with the dreaded variegated yarn on that particular pattern. I decided to make fingerless gloves or gauntlets with the Nephew Yarn.

I've never frogged a project unless there was something to fix via the frogging. I heaved a deep sigh as I pulled the first of the needles, fear and loathing in my heart, but it turns out it's a lot of fun and kind of liberating to undo a whole whack of knitting. And the power! Oh, the power! "Ha ha, tiny knitting projects! Bend to my will! Quake before me for soon you may be nothing more than fibre in my hands!"

I'm a dork with clean sidewalks.

[SUMMARY: I am dork enough to think ripping several hours' worth of knitting back is worth blogging about.]

**FOOTNOTE (unasterisked): Have y'all noticed I have no idea how to punctuate around parentheses? And I'm not even consistent in the mistakes I make? I figure if I do everything I can think of at least once, I'll get it right at least once in every round. It's a good thing I don't knit that way. Besides, a friend once told me you can pretty much skip everything in parentheses when you're reading, so I figure you can pretty much skip good grammar practices. Parenthetically.

ALSO... I did a bunch of editing in HTML because stuff looked wrong and I couldn't un-wrong it from the Blog View for Dummies. I'm a genius. Still a dork.
Posted by Marin (AntiM) at 8:06 AM