Another Day, Another Random

This post says, "I have a digital camera and I know how to use it (more or less)."**

Sunday, I went and dug these out of MJ's garden. Guess what they are.

Those poor, downtrodden creatures are Cascade Hops (probably not supposed to be capitalised when it's all said and done, but it's beer ingredients). If they don't die, I intend to grow them for the purpose God and Benjamin Franklin intended them: love beer.

I don't kill all my plants, but I can't prove it to you right now. Three out of my four orchids are blooming and I took pictures, but (per normal) the pictures sucked so I'm just telling you and you'll have to believe me.

I live in fear that, in Marin's world, orchids are easier to grow than hops.

[SUMMARY: Orchids, easy to grow, not useful. Hops, hard to transport, very useful. It's like my own little experiment in botanical Darwinism.]

Knitting! Exciting knitting! And knitting pictures to make it all better! 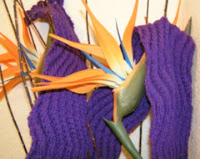 First, that's the Heathers ("Great paté,** mom, but I gotta motor if I wanna be ready for that party tonight.") so that's the end of the Heathers quotes.
Second, when did my camera get purple?
Third, don't you love my ultra-catalogue shots of the Heathers over the birds of paradise in my tropical bathroom? Trés, trés artistique (I know zero French that wasn't in a 70s song, so if "artistique" isn't a word, I don't need to know), no?
The particulars:
Name: Heathers
Pattern: Wavy from knitty.com
Yarn: Cascade 220 Heathers (duh), colour 2421
Needle: Denise (not that the brand matters) size 7 US (but size *definitely* matters)
Finished dimensions: 5" x 68"
Like how I did that all professional, like I'm a real knitter-with-a-capital-K?
[SUMMARY: FO! Not the Stupid Blanket!**]
In future knitting... the Green Gables Drunken Knit Along starts tonight.

KIB, y'all.
[SUMMARY: Apparently anything to avoid Stupid Blanket.]
So there I am, not going to buy a thing, not needing a thing, until I saw...

Let's zoom in for a closer look, shall we? 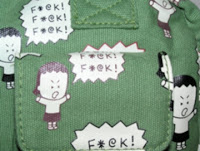 You'll note said cat is NOT sleeping on his nice, comfy kitty bed. No, no, he chooses to sleep right where he will get the most cat hair per square inch where my nose goes when I'm trying to sleep. It's an evil but brilliant plot to keep me awake and ear-scratching** late into the night.

[SUMMARY: Cats are sexy. *ahem*]
I mentioned I saw Casino Royale with Steve Friday night. A quick review: not bad. I could look at Daniel Craig all day, the opening sequence was brilliant, there were some very funny bits, but there was too much romantic for James Bond for my taste.
Now the funny. Well, it falls into the category of "I think I'm funny," but Steve thought it was funny too, so you have to sit through it (a little validation goes a long way with me):
For those who haven't seen the movie, it's the first of the 007 stories, and sets up a lot of the James Bond schtick for future episodes. In one scene, Vesper, the love interest, witnesses Bond killing two bad guys. He sends her to arrange clean-up and proceeds to his James Bond thing. Later, he goes to the hotel room and finds her sitting in the shower, fully clothed, water running over her.
He goes to her and takes her in his arms. She says, "I feel like I can't get the blood off my hands." He gently takes her hands and starts sucking on her fingers.**
I turned to Steve and said, "See? If Lord Macbeth had just managed a little of that action, the story could have ended right there. Happily ever after."
Thinks-she's-funny and snobbily literary. Throw in the cat and the knitting and how am I still single?**
[SUMMARY: Macbeth is my favourite play of all time. Any blood-on-hands reference is going to get the Macbeth treatment from me.]
**FOOTNOTE (asterisked): ...and it doesn't say much else. I'm only mentioning it so you don't have to.