The Nature of Intellect: a Treatise on Jackasses

I had a date last night. With a smart guy. I'm growing to loathe smart guys.

Let's explore this, shall we?

I'm smart. Scary smart. But I'm a dork lush with a filthy, dirty mind who can't count to four, so it mitigates the "scary" portion of "scary smart."

Some people are too wrapped up in the cloak of their intellects to join us here in the real world. Last night's date, case in point. And every time a friend says, "You should meet Bob. You're both so smart..." I cringe, because I know Bob is one of those intellectual weenies who will make me want to put his head through a wall about ten minutes into our first meeting.

Bob doesn't own a TV, but Bob believes in Start Trek.

Bob uses big words for the sake of using big words and doesn't appreciate it one little bit when the chica drinking beer from a bucket in the corner, who is his intellectual equal or better, is verbing nouns right and left. And probably sleeping with the DJ to boot.^

Bob is an intellectual jackass.

[SUMMARY: I don't think much of Hypothetical Bob.]

Case in point from last night's date: Almost every sentence out of Bob's† mouth started with "Ah." Almost every observation I made was answered with "Ah." OK, "Ah," and a smug smile that I know very well (being scary smart and all) means, "You lost me two sentences ago, but all I have in the world is my jackass intellect so I'm going to act smug and condescending and give you this little Mona Lisa smile while I say, 'Ah.'"

Intellectual jackasses take a long time to answer questions, because they have to think thoroughly (or at least give that impression) *before* they answer and/or their answers are so unnecessarily complicated and wordy‡ you could hard-boil an egg (at altitude, no less) before they get the thought out of their mouths.

Case in point: Bob, after being asked if he has siblings, took a good 30 seconds to answer, finally saying he had three.

He clasped his hands in an attitude of prayer, placed the tips of his index fingers on his lips and inhaled slowly, indicating he was thinking about his next revelation, and he said, "One."

It took a *full* TWO MINUTES for Bob to answer "Do you have siblings" and "Any sisters?"

Intellectual jackasses are hyperanalytical. And they want the under-brained dorks of the world to know it.

Case in point: Immediately after proclaiming one sister, Bob said, "Would you care to venture a guess in what order I fall?"

(I honestly don't sit around studying people's every moves and moods to try to figure out their birth order.)

He looked surprised, then laughed like I was just too, too droll. I believe he said, "Ah."

"I'm the youngest of three. My sister is older than me, then my two brothers are older than her. We're fairly close in age; I believe seven years separates us."

Noting that Bob also can't count to four (youngest of three?), but would never admit it as cheerfully as I, I said, "Ah."

"I would guess you have a brother." (pause for applause)

"And you are older." (pause for applause)

Yes, I know he was dying for me to giggle and clap in dewy-eyed awe, to ask him how ever he knew all that... but I didn't. I basically said, "Ah."

He also went to the bathroom, and I was watching baseball (damned Yankees) while he was gone. When he came back and sat down, I returned my attention to him, which prompted him to say, "Ah. You look like a very attractive woman who is being hit on by some nerd in a bar."

"Really," said I, not as a question, but as a statement.

I interrupted him, "I wouldn't get too wrapped up in body language if I were you."

He laughed as if to say, "Ah, silly girl..." and said, "Haven't you heard that 93% of communication is body language?"

(I honestly don't sit around studying people's every moves and stressing that each raise of the eyebrow or twitch of the pinkie means they're disgusted with me or rejecting my religion or something.)

"Don't believe everything you read."

'Cause me punching you in the nose would be REAL body language.

Case in point: Bob told me the following joke:

"What's the difference between Rush Limbaugh and the Hindenberg?"

I've heard it, I pretty much knew where it was going, but I didn't remember the punchline. So I said, "What?"

"One's a flaming Nazi gasbag and the other is a dirigible."

"You're going to do me one better?"

"Well, not better, just completely different: There's a guy sitting on his front porch enjoying and ice-cold beer, watching his wife slave away, mowing the yard. His little 70-year-old neighbour lady wags her finger at him and says, "Young man, you should be hung!"

He says, "I already am. That's why she mows the lawn."

"Ah," said Bob, after a painfully long pause for processing, "She should have said 'you should be well hung.'"

And he laughed at that.

"Uh, well, that would negate the crux of the joke. See, besides being mildly perverted, which is sort of my state of being, this joke speaks to one of my linguistic pet peeves, which is that in the process of strangling someone, he is hanged, not hung."

"Ah, you are right, you are quite right. Because hung is the future... no wait... yeah, the future perfect..."

"No. It's past tense. But pictures are hung. Men are hung. Criminals in the old west dangling from the gallows are hanged."

"Well you just said all men should be hung!"

"Oh, for fuck's sake, Bob. The joke wasn't funny enough to put this much effort into making it work."

No, I didn't say that. What I said was, "No, what I said was the proper term for someone who died with a noose around their neck is 'hanged,' which distinguishes it from putting a picture on the wall (hung) or a man of excellent manly endowment (also hung)."

"Ah. So you're delusional."

To get into a Bob-level state of analysis, I think a lot of smart people don't have anything else going for them. It's like the very pretty people who never make an effort to learn anything because they can get by on their looks. There are a ton of intellectual jackasses out there who beat everybody else over their collective head with stunning jackass intellect because they never found any use for social skills or personal grooming.

In fairness to Bob, he was dressed reasonably and had good hair.

[SUMMARY: And I don't think a whole lot of Bob-Not-His-Real-Name either. And I didn't even get into the part where he MADE FUN OF KNITBLOGS and proclaimed knitting probably the DULLEST and MOST USELESS thing you could possibly blog about. And tried to make a case that computer programming is as sociable as knitting. And he analysed me based on my FAVOURITE CARTOON CHARACTER as his first trick of the night, and God DAMN, I don't care for Bob.]

This also gives me a chance to defend (as far as I can) the impetus behind Stupid Blanket.

See, here's the lovely linen stitch scarf I knitted a full three square inches on before deciding to invest my life and future arthritis in forty acres of Stupid Blanket: 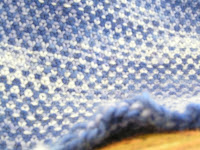 Isn't it cool? Classy? Makes variegated yarn all woven and sexy and stuff? 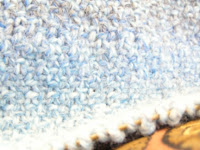 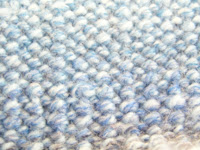 Red will want to drink an entire bottle of Jack when she hears this, but I think I'm going to take the leftover (once again, is there really any such thing as leftover yarn?) mercerised cotton (*gasp*) from a past baby blanket and knit it in linen stitch (*gasp*) to make washcloths (*gasp*) because I think this bumpy back would make a cool exfoliating surface. 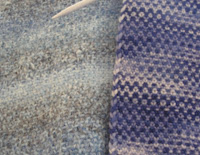 Funny story (sort of): the boss got a huge, *gorgeous* orchid from his mother when his mother-in-law passed away last month. The blooms were laying the stalks flat on the table, where they made a dramatic display, but took up too much room. As I have set myself up as a sort of orchid expert (I'm not, I just have had some luck growing the easy ones), he asked what could be done.

"These need to be staked," I said. He started discoursing on having to repot to do that, etc., but I said, "Nah. They make curved stakes and bamboo stakes. There's an orchid store right up Broadway..."

Would you believe no yarn pusher (Sylvia) or orchid seller has ever even acknowledged my bitching and moaning? No, they just cheerfully swipe the VISA and wrap it all up like the enablers they are.

[SUMMARY: Sell me something.]

But isn't it pretty? 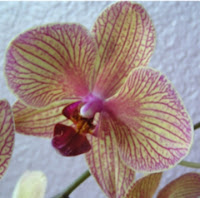 All four of my moth orchids are blooming now.

If you look out the window on the right, there are the still-sad hops plants. If you look on the windowsill right next to the new orchid, you'll see the catgrass Secret Pal sent for Cat for Scale.

I mean, the catgrass has made it to the windowsill after sitting in the living room with the rest of the knitting accoutrement (I know, I know) for the last several weeks, but because it requires overnight soaking (therefore, forethought), it is only nominally closer to becoming a kitty treat than it was the day it arrived.

[SUMMARY: Still dorky after all these years.]

Maybe I should put cat grass on my to-do list for the weekend.

Maybe it'll stop the cat looking at me and saying, "Ah," in that smug tone of voice.

†FOOTNOTE (don't cross me, you intellectual jackass): Hello, kettle? You're black, but at least I'm funny and I get laid once in awhile.

‡FOOTNOTE (double-crossing intellectual jackass!): Not his real name, mind you, but "Bob" for continuity's sake.

§FOOTNOTE (snake in the grass intellectual jackass): I firmly believe boys who have sisters, particularly older sisters, tend to make better boyfriends. They've been beaten, abused, learned about strong women and generally have recieved an education in how to treat women from women who know.