Snakes on a Plane

I did something brilliant yesterday. Well, I think it's brilliant. Sarah laughed at me.*

See, Sarah, genius knitter, writes her patterns out on index cards, which helps eliminate that thing I do where I read the first six instructions on one row, then accidentally let my eyes drop to the next row and end up with some truly wonky cables.

Sarah has suggested several times, after watching me de-wonk my cables, I might want to try the index card method.

I have mostly ignored.

Until I had this brainstorm.†

I trotted over to my friendly neighbourhood Office Depot‡ yesterday and got some index cards for ink jet and laser printer.

I put the cabled clutch pattern (row by row, with all the arcane cable instructions printed on each appropriate card) on MS Word index card templates and voilá!%

Cards I can reprint when wine is spilled on them.¶

Cards I can correct at will.§

I also discovered yesterday that it isn't easy taking a photo of a computer screen.

The cards in their natural habitat. 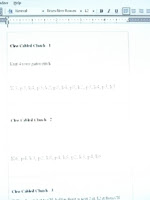 But look how pretty when they're all printed.

As I mentioned, there was media coverage of last night's Stitch Therapy. I still don't know where they came from (Hoboken? Mars?), but they were very nice and if I ever find my picture has been published or I've been quoted, I'll certainly make all of you read it/look at it and give me a Scooby treat and scratch behind my ears and all that. 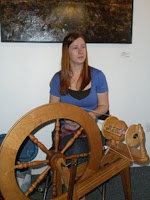 Mary Kay spent her night patterning a 50-year-old crocheted skirt Lijia brought, while Sarah spent her night finding errors in the Vogue Stitchionary. Mary kay and Sarah may be WAYYYYY beyond my knitterly scope. 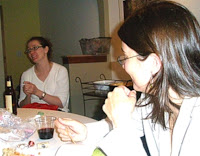 Heidi and Lisa-prounounced-Liza are just happy I didn't run the first picture I took of them. Mad photo skillz. 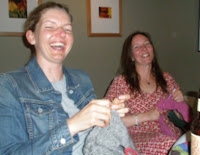 I hate to admit I don't remember the name of the lovely woman (hello, what's-her-name! I'm your new best friend!) on the left, and I'm not sure I know how to spell Lijia there on the right, though that's what we'll spell her for now, since that's how her name is pronounced. 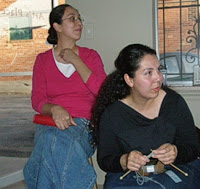 You know how I kinda dropped (clumsily) head-first into the DK Nation? ("Um, I don't know if anybody's interested or whatever but I kind of like knit at this bar...")
Well, last night Sarah was talking about hot springs and Red is planning a white-water rafting trip for Sunday and I said, "We should have a knitters' retreat to Jackson. I know a natural hot springs you hike into and we can go white-water rafting and last time I checked there's a really cool yarn store in Jackson..."
I guess I'm planning a knitters' retreat to Jackson, Wyoming in, say, September. Just puttin' that out there.
[SUMMARY: Joiner to leader in a blurt.]
By the by, I spoke too soon the other day: First Among Imaginary Kellys's blog has definite purplocity.
OK, enough of this knitting crap. Bob and Mira would be so proud if they knew I was actually delving into the socially relevant here.

There's an AP story y'all need to know about. And maybe help me out a little.
You can read the actual story here. Go now. I don't know how long it will be there.
The short of it: A man tried to smuggle 700 live snakes, including two cobras, onto a plane in his carryon bag at the Cairo airport yesterday.
Here's where you can help:
[SUMMARY: Snakes on a plane!]
Happy Friday, ev'rybody.

*FOOTNOTE (asterisked, oddly enough): More because I was so pleased with myself than because of the actual idea, I'm sure.
†FOOTNOTE (crossed): And I'm sure it has nothing to do with my need to never, ever do anything the way someone else tells me I should, like a two-year-old saying, "I can do it myself!"
‡FOOTNOTE (double-crossed): Where, if you're into this sort of thing (and I have the feeling some of you are), they have Mr. Clean Erasers, the four-pack, on clearance for $5.
%FOOTNOTE (percented): How do you like my accent now? Boo-yah!
¶FOOTNOTE (paragraphed): Not that I would ever spill wine on my knitting patterns. Actually, Sarah spilled wine on my cards and I said, "No big deal! I can reprint that at will!" That's just how I roll.
§FOOTNOTE (swerved): Not that I would ever accidentally put in an extra p2 on Card 4 or anything.
#FOOTNOTE (pounded): OK, I made it a little about knitting. Just for you.

I'm getting a block (or maybe just two) of tickets for Stitch n' Pitch at Coors Field on July 28. Anyone interested (including cousins, sisters-in-law, brothers, random tourists, ladies, gentlemen, boys, girls, those undecided...) can let me know by, say, next Thursday (May 31st) and I'll include you.
It's $19 and you get a gift bag (you like gift bags), in case that sways your vote.
Blurt.
Posted by Marin (AntiM) at 7:25 AM