Wanna witness my new camera in action? OK, not in action as such, since it's REALLY difficult to take pictures of your camera.†

Here are all the new orchids you haven't seen yet:

This Cattleya is the only one of the new orchids in bloom. It's fragrant. It also looks all raggedy because the first thing I did upon getting it home was to knock it over, breaking one of its blooms off and permanently scarring the other. 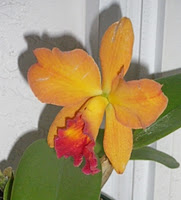 None of these are blooming, so they're not that interesting, but you have to look at them anyway, because (once again) I control this space:

L to R: tiny little Phalaenopsis, won't bloom for four or five years‡; bloom-sized something fragrant (it's a very pretty violet and white and I don't remember what variety it is... Dendrobium, maybe?); a tiny little jewel orchid that's purported to be very rare. This is the one I'm most likely to kill. 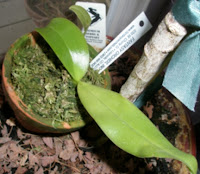 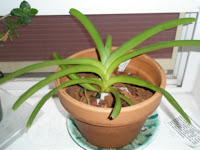 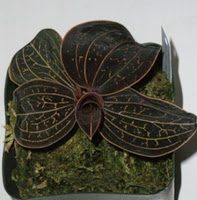 [SUMMARY: This is not an orchid blog. But it is a picture blog. Ignore the lack of knitting. Revel in the pictures.^]

L to R: Austermann Bamboo Soft in pink, blue, white and brown with a hint of olive; Colinette Jitterbug in the Jewels colourway; Knit Picks Wool of the Andes in Amethyst Heather (which looks more plum than amethyst to me%) for the Rowan 40 Juno. 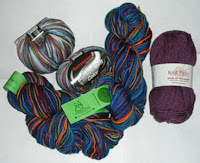 Closeups. Because I can. 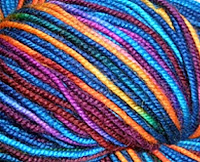 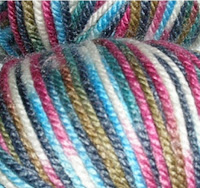 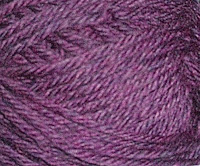 I hate to brag, but my new camera has a lifetime subscription to purple, so I no longer have to suck the blue out of my photos in Photoshop, lending that Hiroshima glow to all surrounding items, just to show a little purple to my peeps.

[SUMMARY: I have found a camera smarter and more colourful than me. I Robot had it wrong; the revolution will not be perpetrated by robots, we will be taken over by digital cameras.]

I have a serious knitterly numbers problem. Here's the stitch sitch:

So why did I think I was going to be able to substitute yarn?

The most upsetting part is I remember being really excited that the Knit Picks yarn was the exact same gauge (per the ball band, at least) as the Rowan yarn mentioned in the pattern.

Juvenile onset Alzheimer's. Take my car keys from me. Roll me to the home before I kill again.

What's more, the pattern calls for the yarn to be doubled, which, if I'm reading it correctly -- and I'm probably not -- would make a hell of a difference in gauge. I think there's algebra involved in this, 'cause you don't just double the yarn, the needle size and the gauge, right? There're averages and means and quadratic equations and imaginary numbers# and shit, aren't there?

Is it going to be too, too fucked up? Should I save the amethyst WotA for... something else? Is there a protocol for figuring this out I should be aware of to avoid future fuck ups?

Of course, that last question is moot, because even if I'd known the protocol... well, I really thought I was buying yarn of a sufficiently similar if not identical weight/gauge, so I probably would have just started wrong and stayed wrong regardless.

Still, it seems this is something I should know. You know, to avoid future fuck ups.

[SUMMARY: We hates the maths.]

I'm guessing the only thing I can do is knit a swatch and see what happens. Maybe being the world's tightest knitter will serve me well this time.

Having nothing to do with photography at all, but TOTALLY noteworthy even in its lack of purplocity, First Among Imaginary Kellys FINALLY got her blog up! Be the first on your block to join the Kelly revolution!

And, finally, no photographic boondoggle would be complete without a Cat for Scale*: 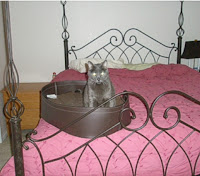 †FOOTNOTE (crossed): Of course I tried it. What do you use your self-portrait setting for?

‡FOOTNOTE (double-crossed): I gave one just like it to Tani, mother of baby Bert for whom Stupid Blanket was forged. I thought it would be kinda cute for him to grow up with his own little Bert orchid. They'll grow and bloom together. Awwwww...

§FOOTNOTE (swerved): "It has raisins. You like raisins." Hmmmm... maybe one of my hundred or so pairs of socks in the chute needs to be a Better Off Dead pair of socks. Lotsa good quotes there.

^FOOTNOTE (careted): I'm doing the Jedi mind trick on you, in case you missed it. It's only a matter of moments before I start waving a bagel in the air, saying, "Droids, sir."

%FOOTNOTE (percented): Somewhere, my brother is singing, "purple is purple so why should it be you and Mom just want to call it burgundy..." If you're a child of the 80s, you get it.

¶FOOTNOTE (paragraphed): Yes I was.

#FOOTNOTE (pounded): As far as I'm concerned, *all* numbers are imaginary numbers.

*FOOTNOTE (asterisked): I'm wondering how long it will take for Ally or Red to point out the bottle of KY on the nightstand. Ha! Beat you to it!
Posted by Marin (AntiM) at 8:49 PM