Had you going there for a moment, didn't I?

What the HELL is wrong with me? I went to Favourite Bar last night for dinner and Eric the Wayward Bartender was working (he's been going to real estate school, so I haven't seen him in a month). It was all very pleasant and normal until... well, I'm pretty sure I said, "Guess who I'm sleeping with," then told him.

That's crass and grubbing for the limelight and unnecessarily forward and I'm sure TMI and not any of his business in all likelihood and not my story to bandy about like there's nobody else involved for sure.

What the HELL is wrong with me?

[SUMMARY: I was raised better than my recent actions would indicate.]

Anyway, how was your weekend?

I knit and knit and knit on Friday night,+ finishing the fuzzy, felty clutch. It's my first felted project. And the first time I've done cables since the first cables I did five years ago.

Because I'm such a fucking nightmare,† and we all know knitting pictures make everything better,‡ here are the pictures of the felted clutch: 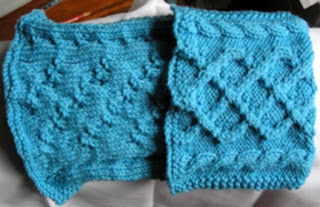 Fresh out of the washer, not yet blocked 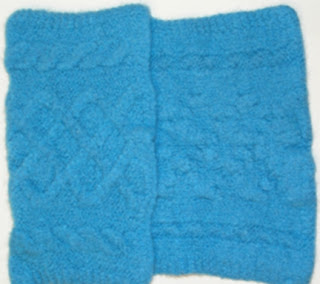 Blocked, dry, no cool little magnetic clasp, but we'll get there soon enough 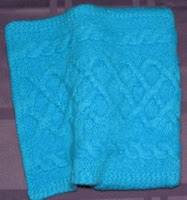 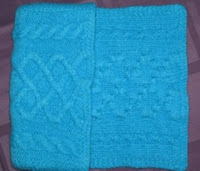 So, let's see... I'm supposed to do the who/what/when/where on this, right?

Pattern: Cleo Clutch by Chrissy Gardiner for Spun Magazine.
Yarn: Cascade 220, um... blue. Probably 9468. I have quite a bit of yarn left over (leftover yarn? Bah!), but probably not enough for a whole other purse.
Needles: US10, Denise, would have been much faster on Addis, but I either have no size 10 Addis or they're stuck in a WIP (or a wormhole in the time space continuum with all my fucking Book Club books§).

This was very pleasant to knit, and I dig the felted cables thing. It was a great break from Stupid Blanket, the cables made it interesting, and the pattern is obvious enough after the first repeat that I didn't lose count (much) doing the KIB thing at Other Bar. And that's saying something for your girl who can't count to four.

In bad knitting, I did another repeat on the Lacy Racy Bellocqs, then realised I had misread the pattern just a tiny bit and instead of doing a repeat of the pattern before starting on the calf shaping, I just barrelled right in, plant the flags and damn the jam, and now I'm 108 stitches into the calf shaping and afraid to have my sis-in-law try it on for fear that ONE INCH of missing ankle ruins the whole thing and requires frogging.¶

Back to good knitting (after a fashion, no pun intended). I received my gift tags from Knitterella via Stitch Diva Saturday. That's fast. That's service. I'm delighted. 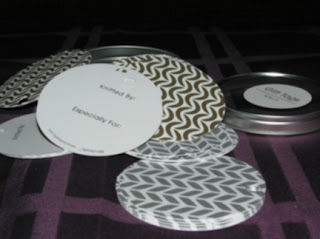 Can I take a moment to sing the praises of Stitch Diva?

I love the patterns on Stitch Diva, and when I buy them, I always just download them. One of the patterns I scarfed up last week didn't download properly, so I shot off an email asking if someone could help me.

I also have to give props# to The Yarn and Fiber Company, and I should have done it sooner.

When I went on my quest for Rowan 40, the Y&FC price was about three dollars cheaper for a new copy ($19.99) than the cheapest used copy ($22.97) I found on ebay and all those other auction/used book sites.

THEN... they have free shipping on everything, so that was my price, period.

And while their shipping policy says if you order after 3:00 any business day (which I did), it will probably go out the next day, they shipped mine within an hour of my placing the order and it arrived two days later (rather than the four promised in their shipping policy).

Let's see... we've covered the good and the bad. How 'bout the ugly? 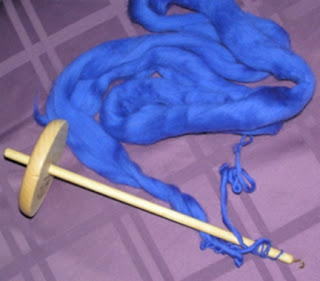 Yeah. I don't know what the fuck I'm doing. But I had fun. Actually, I think if I wasn't paralysed by the point where the twist meets the draft, I'd be pretty good at this spinning thing.

Kate is laughing her ass off somewhere right now.

[SUMMARY: I didn't pay my purple bill again this month, but look what I can do with a few yards of roving and a spindle!]

I got up fairly early% Saturday morning and went to Fantasy Orchids to get a little something for (new-mom and future proud owner of Stupid Blanket) Tani. And maybe me.

I can't believe I forgot to take pictures of the box of orchids I came home with. I have more than doubled the orchid population at the Barfly Beach & Resort in the last week.

While I was at the hothouse perusing the flowers, Kathryn of the Drunken Knitters texted to see if I'd like to have breakfast a Kyle's and I said yes. Kyle's is across the street from Patrick Carroll's where the drunken knitting happens (at least the more organised version of it) and just down the street from Sylvia's House of Fuzzy Crack. Not a bad locale for a breakfast joint.

That was all lovely diversion while I was waiting for Kelley not to call, then I went to see Spiderman 3 with dear old buddy Mick, an Elk, whom you may remember from poker night.

We had a couple of beers,†† saw the movie, and agreed it was 40 minutes too long. Then we had dinner (in the form of a trio of fried things off the Chili's menu. Chilli's menu. Whatever).

Then I went to Favourite Bar where everybody asked where Kelley was and told me she had been in earlier with The Boy and I took Sex Toy home and had a brief‡‡ but body-bending romp then Saturday was over.

[SUMMARY: A shitload happened on Saturday.]

Didn't know you were getting half-naked Marin pics, did you? Hide the children! 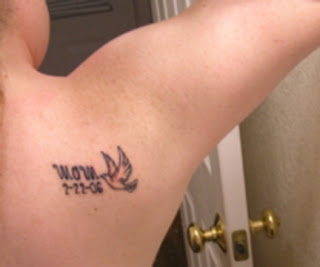 This just goes to show that with a little judicious positioning and cropping, back fat can look like arm muscle. 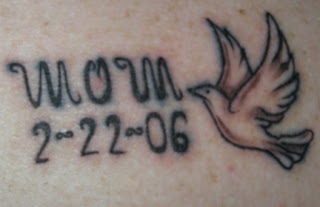 I got the MOM 2-22-06 last year in Vegas on Mother's Day, but I asked the nice buzz-boy to make it 50% greyscale so it wouldn't be very dark. I changed my mind this year and asked my friendly neighbourhood buzz-boy (Justin at Celebrity Tattoo on Tennyson) to darken it up.

Justin also drew the dove, since I didn't want one with a baby Jesus in its mouth or a rainbow-coloured halo or flames shooting out of its eyes.

On a side note, it's damned difficult to take pictures of your own shoulder. I have half a big-assed memory card full of shit like this: 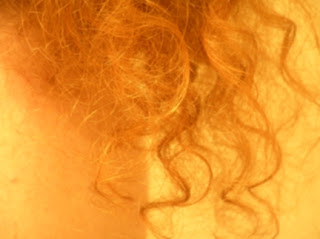 I took the close-up by setting the camera on top of the oversized TV in the livknitting room and taking full advantage of the time lapse between pushing the button and taking the picture.

Who knew that annoying 5-second delay would come in handy?

Then we had Mother's Day dinner at the brother's, which was very nice.

Then it was Monday and I barfed all over my blog and I had dinner at Favourite Bar and stuck my foot so far down my throat I qualify for the Tracy Lords (Traci Lords? Whatever) discount at the dentist and Kate saved me by calling to say she was at Patrick Carroll's having dinner and I joined her and it rained like I might need to take two of every animal into the Mini Coop and now it's Tuesday.

[SUMMARY: One more day of this crap and I may qualify for my own telethon. Am I whining again? So soon? Did I not learn my lesson?]

Time to go kiss a frog and see if I can get all better.

Maybe if I slip him some tongue.


+FOOTNOTE (plussed -- non-plussed?): You know, with no Kelley to lead me otherwise.

†FOOTNOTE (crossed): Today, tomorrow and apparently always. Holy fucking cats, I'm ashamed of myself. What the HELL is wrong with me?

‡FOOTNOTE (double-crossed): And frogs. Frogs make everything better. Only I don't have any frogs, which might explain the horrifying lapse into personal fuckitude. Lack of frogs can turn your whole world sideways.

§FOOTNOTE (does that thing have a name?): Have I been cursing way more than usual today? No, stop, that was mostly rhetorical. Yes, yes I have. I know it. And I'm kinda sorry. I mean, it certainly speaks to the mood of the day, but really, it's not your fault. Have a frog or a bubble bath or some ecstasy or something and try to pretend it never happened.

¶FOOTNOTE (para'd): Not the good frogging we've been discussing, not the frogging that makes it all better, but the frogging that would truly suck because I have no lifelines that far back and it's all lace, baby. Pray for me. Better yet, pray my sister-in-law has short ankles.

#FOOTNOTE (numbered): Yeah, I said it and it's tired, but I'm old and I'm probably going to pretend it's ironic so maybe I should get some slack here.

%FOOTNOTE (percented): You know, no Kelley keeping me out late and all that.

††FOOTNOTE (double-crossed): Like I'm going to continue non-alcoholic solidarity with Kelley when she blows me off. I try to be the bigger person; I'm not THAT big.

‡‡FOOTNOTE (double-double-crossed): Just an hour this time. He had to be at work at o'dark thirty. Hey, just because Eric doesn't need to know about my sex life doesn't mean you're off the hook.