I will now share with you a pictorial journey of my weekend.

You are so excited. You nearly peed on your feet.

First, I don't want you to feel you're falling behind on the goings-on out my window at work.

This overall view shows you Friday's weather, My Crane, the progress on the high-rise and the lack of arms on top of the 1999 building. 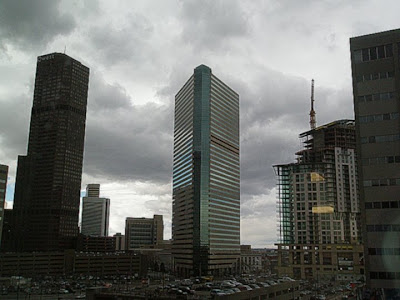 [SUMMARY: I am nothing if not succinct.†]

I know some of you‡ were following the saga of the arms on the 1999 avidly and I wanted to be sure you got proper closure.

Also? The billboard debacle of two weeks ago? 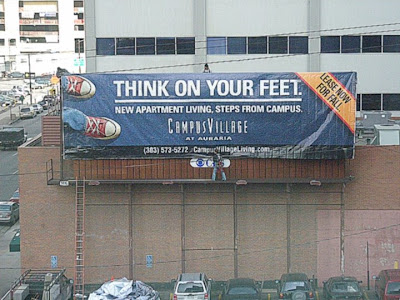 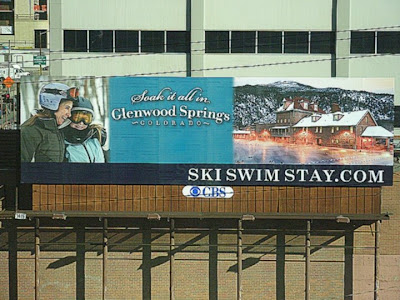 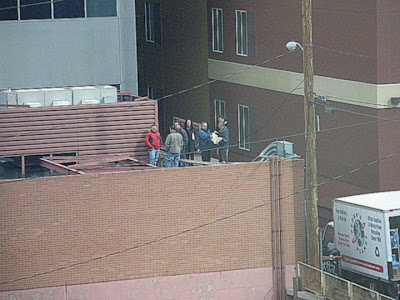 And this poor little old guy who apparently is unclear on the concept of the new freedom afforded him by his Rascal scoot-along: 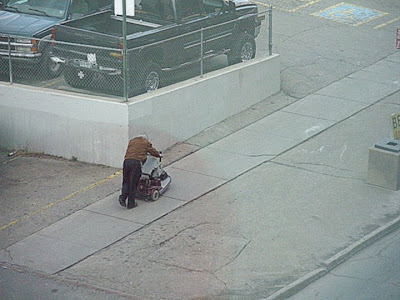 I took this through the sun roof on the Cutest Little Car in the Whole Wide World while stopped in mad traffic Friday afternoon.# 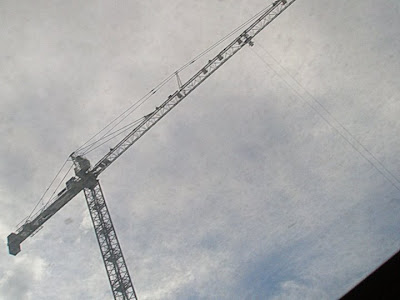 And this out the window of the Cutest Little Car in the Whole Wide World: 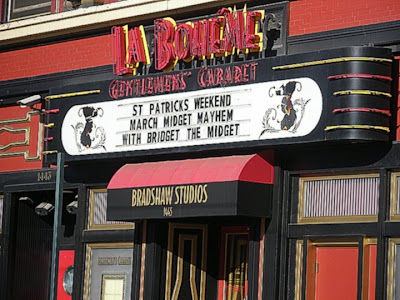 For those not in the know, La Bohéme is a strip club and Bridget the Midget% is apparently famous.††

[SUMMARY: No education is ever wasted. Some may be suspect.]

Sunday, I went to see my grandmother. She tells my father I'm the only one of her grandchildren who comes and visits her.‡‡

I want to be sure to get that out there in support of my ongoing bid for sainthood.

[SUMMARY: I know, I know, but I'm convinced enough points will at least get me a t-shirt.]

After Grandma, I decided to stop for a grilled chicken^ sandwich at Arby's and saw this: 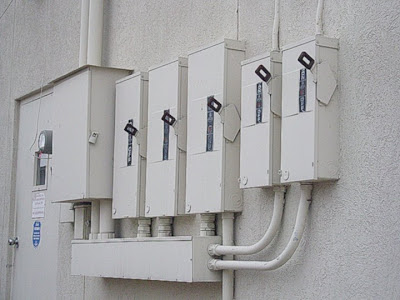 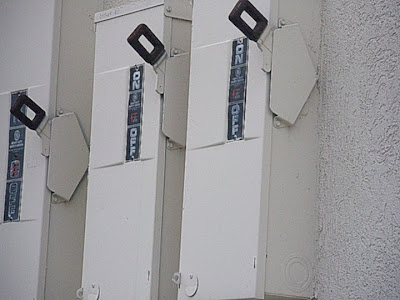 I believe that is what they call and attractive nuisance.

One more sainthood point for doing nothing but taking the pictures and contemplating the possibilities.

[SUMMARY: Join me in my game of cosmic Skee-Ball.]

This is chronologically out of whack, but I wanted to save the best for last.

Beth, with whom I used to work in Boulder, came from Seattle for a visit. She stayed with Tani and the three of us§§ went shopping in Boulder on Saturday.

This is outside Paper Doll: 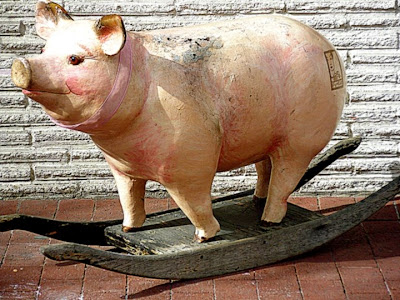 Do you see what I see?

Yep, I'm pretty sure you can lick the pig!

§FOOTNOTE (swerved): It's all a matter of perspective. Hans and I were riveted.

¶FOOTNOTE (paragraphed): Beyond the usual antics of the parking lot monitor. See, he used to drive up in a small, silver pick-up truck, run the paid spots off the computer, walk around making note of who was parked where and mete out parking lot justice to those scoff-laws who didn't pay. Then he'd usually get into his small, silver pick-up truck and drive away. If the weather was really nice, he'd take off walking.

We think he may have been demoted, 'cause now he drives in in a little green VW something-or-other and runs the computer and checks the spots kinda half-assedly, then climbs into his car and reads the paper for a couple of hours. We've seen people park and just walk away without paying while he was sitting there in his car and they never get tickets.

The small, silver pick-up truck still comes around, but it's driven by someone else and all he does is pull in and get the cash out of the box while the small, silver truck is still running.

Hans and I are wildly interested in what's going on with parking lot politics. Some day we will snap and go knock on the window of the little green VW something-or-other and ask a series of grueling questions until our curiosity is sated.

#FOOTNOTE (pounded): I was going to see Brass, Bagpipes & Co. with my Dad and his not-girlfriend (and her daughter and granddaughter). I left a little early so I could stop by the yarn store (*ahem*) "on the way," but traffic was such a claustrophobic hell I barely made it in time to his house and had to skip yarn altogether. Oh, the humanity.