For Your Dining Entertainment

Sometimes in the oil and gas world, we do acreage swaps.†

Say Bunnykiller Oil & Gas has the oil and gas leases‡ on the red parts and Dead Dinosaur Exploration & Production has the leases on the blue parts§: 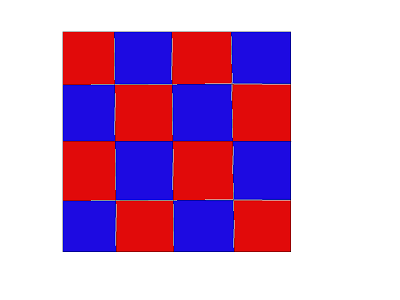 For one, Bunnykiller and Dead Dinosaur may not want to work together.

For two, they may not want to or be able to get their own road rights of way or pipeline rights of way from surface owners for two separate and intertwined drilling programs.

For three, the state Oil & Gas Commission may say they can only drill one well per 160 acres, and with those red and blue squares being 40 acres each, it's mathematically untenable for them to get what they want out of the area without being in each other's pockets.

So they draw up an agreement to swap acreage. I believe this even has certain tax advantages. In any case, this is what they might aim to do: 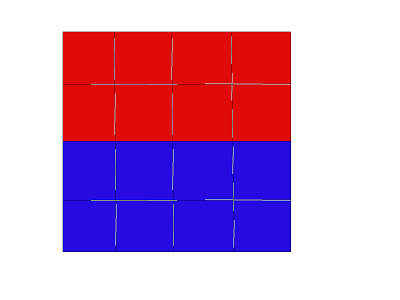 Now everybody's safe in their own little red and blue worlds% and peace reigns in the earth-raping business.@

It sounds really sweet and Disney from your point of view, but Hans and I have to deal with the contracts involved, and they're not standard issue items in our workaday world. Hans, being greener than I,¶ occasionally comes to ask questions or confirm suspicions.

Recently, he did so, using his inimitable Hans style to get his point across.

Now that you have the backstory,# ladies and gentlemen, I give you Hans and the Acreage Swap††:


†FOOTNOTE (crossed): There's a lot of boring educational stuff before you get to the good part.

‡FOOTNOTE (double-crossed): Because that's how we get the land we drill on -- leasing the minerals. Generally, it's for two or three years and we pay a per-acre bonus up front. Then if there's a well producing in marketable quantities, the landowner gets a royalty on that, usually about 15%.

§FOOTNOTE (swerved): I did the graphics myself.

%FOOTNOTE (percented): Don't read a lot into that.

@FOOTNOTE (atted): Or that.

#FOOTNOTE (pounded): And now you know almost as much about landman work as I do.

††FOOTNOTE (ddouble-ccrossed): Hans is such a good sport. He doesn't only mind when I mock him, he lets me take movies of it.
Posted by Marin (AntiM) at 7:08 AM