Before we talk about all the things I'll be finishing, let's talk about something I'll be starting: 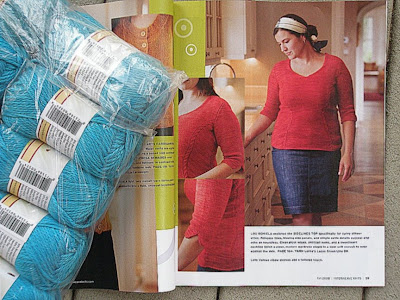 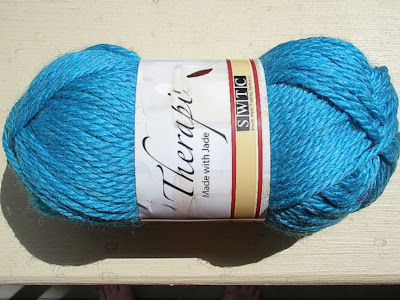 Which wasn't supposed to come in until the beginning of September, but my pusher, Sylvia, lured me to the House of Fuzzy Crack Friday to pick it up.†

And I liked the pattern when I saw it in the new Interweave Knits and was considering what to knit it of when the Yarn of Rocks came in.

So happens the pattern's even written for that EXACT GAUGE.

And before we get into things I'll be finishing, let's take a quick look at a couple of things I'm in the middle of. Like this: 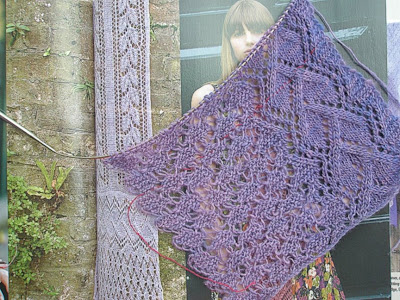 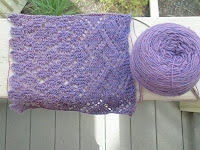 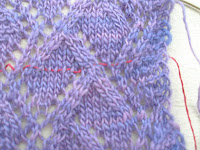 That's the Malabrigo Lace Secret Pal sent for my birthday, and I finally found a project for it, the somewhat inelegantly-named "Scarf with French trellis border from Weldon's 1890 and bramble leaf center."

Then there are Dad's Low Tide Socks, which now have heels§ and a little bit of leg.¶ 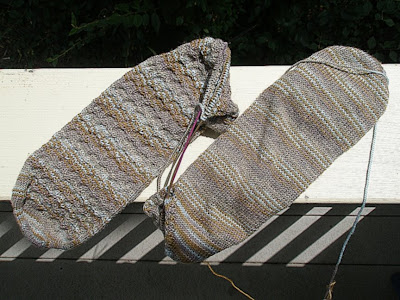 I used a new heel method# that I really like: Short row, with no wrapping and turning and picking up wraps. Look how pretty it is: 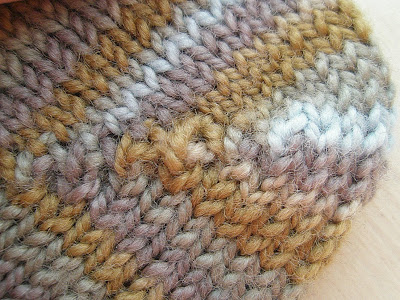 But I'm not working on those projects for a little bit while I complete my Ravelympics events.††

Oh, look how much a knitblog this really is!

I completed one event in WIP Wrestling‡‡ mostly on Saturday,§§ and did fuck-all on my other WIP Wrestling event.¶¶

I wove in the ends on the Malabrigo slippers that are -- technically -- a Mother's Day present for my grandmother, and washed them and stuffed them with washcloths to block them into some form that didn't look like crumpled paper.

I then sat down to knit the acorn embellishment. I determined that said embellishment mostly resembled an oddly-coloured, hand-knit sperm, so I decided to leave the embellishment off. 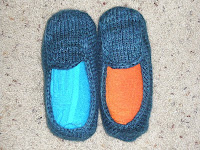 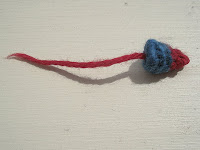 Sunday morning, when they were dry, I took them out to get artsy photos of them for the blog and Ravelry. 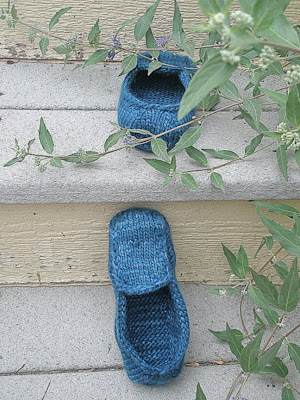 I believe I succeeded in stirring up bees more than I succeeded as an artist, but I think I should get an A for effort.## 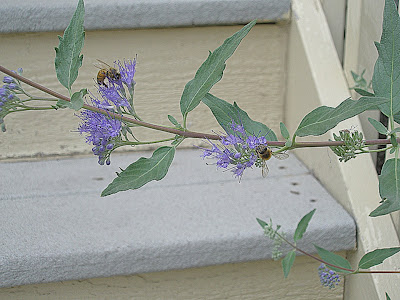 [SUMMARY: I did little, yet accomplished so much.]
I had already determined my final event in the Ravelympics would be the Sweater Sprint, because I wanted to knit a skull sweater for Tallest, Hairiest Nephew's birthday.
I found a skull chart on Flickr (the skull designer is on Ravelry under the same name)... 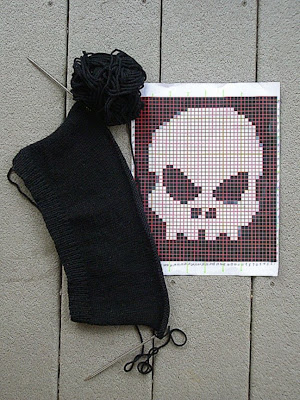 ...and then I went to Barnes & Noble at lunch and found a series of kids' books called "Vampirates."
So THN is getting the books too and I'm modifying the skull to have fangs.%
I'm giving myself a little pat on the back††† for remembering how fun and quick the colourwork was on the Monkey Pack and how dreary the miles of solid stockinette was.
I started the back of Vampirates and am saving the skull part for last, just to treat myself.
[SUMMARY: Old dog, new tricks.]
I fully embrace my dorkness in getting excited over something called Ravelympics.
Mostly, I embrace the fact that the threat of public humiliation in the face of failure of the stated objective is a powerful motivator for me. So I'm confident I'll finally finish the Lizard Ridge and have THN's birthday present done on time.
Know thyself.

†FOOTNOTE (crossed): OK, I was going there anyway and she hadn't actually managed to get the email out to me before I showed up on her doorstep, thumping a vein and jonesing for yarn, but I'm going with "lured" anyway.

¶FOOTNOTE (paragraphed): Technically, the It Happened One Night phase.

#FOOTNOTE (pounded): New to me.

††FOOTNOTE (ddouble-ccrossed): Being a competitor is really hard. You have to devote yourself to the competition. You can't be distracted by rock yarn.

##FOOTNOTE (pounding to the finish line): Kinda like the Special Ravelympics.

%FOOTNOTE (percented): I have it on good authority that I'm not just playing to my own inner eight-year-old boy. THN will be thrilled. Brother and eBeth both say so.