You Are Not Spam 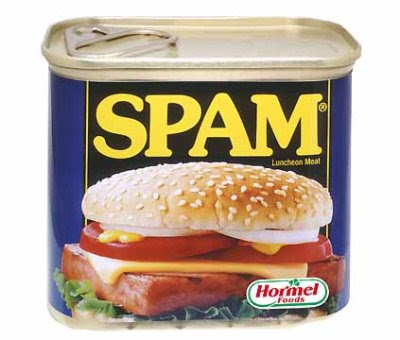 It's the headline over at the blogger.com dashboard.† It made me laugh.

Then it reminded me of this philosophical nugget‡:

Which reminded me of the Arapahoe County Stud Squad, a wholly unofficial social group we started in high school.§ The sign of a fellow member of the ACSS was the Spam key on his keychain.¶

[SUMMARY#: How much more dork? None. None more dork.]

Aren't you glad you boarded my train of thought today? Even if it derailed at the station?

Marin says: It smelled like Campho-Phenique out of the bottle, so I'm guessing benzoin. Then it smelled really fruity -- definitely grapefruit, maybe mango and lime. It mellowed and sweetened and completely lost the fruit after a couple of hours. Now I smell like a subtle, sophisticated Junior Mint and I love it. This is the first of the parfums/oils I really like -- no head shop smell here.

Black Phoenix says: One can even set up quite ridiculous cases. A cat is penned up in a steel chamber, along with the following diabolical device (which must be secured against direct interference by the cat): in a Geiger counter there is a tiny bit of radioactive substance, so small that perhaps in the course of one hour one of the atoms decays, but also, with equal probability, perhaps none; if it happens, the counter tube discharges and through a relay releases a hammer which shatters a small flask of hydrocyanic acid. If one has left this entire system to itself for an hour, one would say that the cat still lives if meanwhile no atom has decayed. The first atomic decay would have poisoned it. The Psi function for the entire system would express this by having in it the living and the dead cat (pardon the expression) mixed or smeared out in equal parts. It is typical of these cases that an indeterminacy originally restricted to the atomic domain becomes transformed into macroscopic indeterminacy, which can then be resolved by direct observation. That prevents us from so naively accepting as valid a "blurred model" for representing reality. In itself it would not embody anything unclear or contradictory. There is a difference between a shaky or out-of-focus photograph and a snapshot of clouds and fog banks.

No cats were mistreated during the formulation of this paradox, or in the process of creating this perfume.

(waggling fingers in the well-known Hans sign language that means, "Put that wrist up again. I need another sniff.")


†FOOTNOTE (crossed): Apparently, some people's blogs got marked as spam and they got locked out and maybe reprimanded.

§FOOTNOTE (swerved): We did this a lot. The Lobotomy Club and the Overland High School Under the Table Tone-Deaf Choir and Kazoo Corps were adjunct to the ACSS. I tell you this so you know just how much dork you're dealing with.

¶FOOTNOTE (paragraphed): The Spam key was both a sign -- not unlike the Masons' secret handshakes -- and an initiation. The only way to gain membership in the ACSS was to steal a Spam key off a Spam can in the grocery store. I regret our effect on the poor people who got their Spam home only to find themselves keyless. We were young, restless dorks.

I happen to know some of us... um, them... still have Spam keys on their keychains.

#FOOTNOTE (pounded): I initially typed "DUMMARY," which may be more appropriate.

††FOOTNOTE (ddouble-ccrossed): Which apparently accounts for the original smell. Once I read that oakmoss smells like turpentine, my original thought of Campho-Phenique made sense. I rearranged the scents in my head and I believe Peppermint + Turpentine = something a lot like Campho-Phenique.

‡‡FOOTNOTE (doubble-crossssed): Which I had to look up. And the first thing Google came up with was the MSDS on zdravetz. Scary. But a cool word. Any word with a Z in it has an automatic cool factor.

§§FOOTNOTE (haz mat fumes - getting dizzy): Which is a fairly typical male response to a lot of perfumes. Interestingly enough (and this is the educational portion of today's show), around 1940, manufacturers started putting a particular compound (probably an aldehyde) in laundry detergent that has caused a whole generation to think of the smell of laundry soap as "clean." When the trend in perfumes went to clean (the 90's), many of the "lesser" perfumiers (read: those the French look down on) used the same compound to hearken people to the idea of clean they're programmed to believe. So when guys say it smells like soap or it smells like laundry, I imagine they're very tuned to the scent of laundry detergent as the pleasant scent.

Brother will be so happy to hear it. He thinks most perfumes smell like soap.