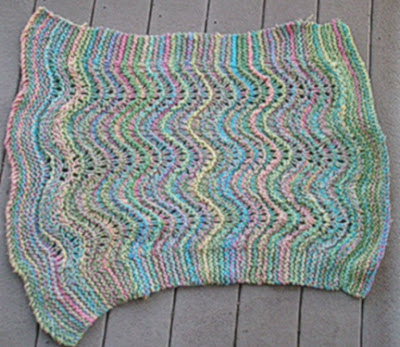 I couldn't keep Cat for Scale off this. I tried using the Boy Colours Big Baby as a decoy, but he didn't want Boy Colours, he wanted Girl Colours. When I finished it, I tossed it in the other recliner† and he's been nesting in it every since.
You may be horrified that I let the cat nest in a blanket that will go to a tender and beloved baby, but the baby in question lives with at least three dogs and at least two cats and the blanket will be washed, of course, so... I didn't feel the slightest compunction about distracting the Quill Beast from, say, my circular needles‡ or my dinner.§
If that bothered you, don't read the next bit. In fact, if you're in the middle of any kind of meal or tend to be squeamish, don't read the next bit. Fair warning.
The other night, the cat walked across my head, down my shoulder and hopped to the Other Recliner to cuddle up with the GCBB. He gave his balls a perfunctory lick,¶ then began the distinctive *hglughglughglug* of a feline about to hornk something up.
"NO! Not the Blanket! That's for a BABY! Quill!"
But a cat in the middle of a good hornk doesn't so much pay attention.
He upchucked all over the corner of the blanket, sat there for a moment blinking at his work, then licked it clean.
(That was the gross part. All you delicate flowers who averted your eyes can tune back in now.)
[SUMMARY: Sorry Dave! I'll wash the blanket before I send it!]
And just in time for the Yarn Acquisition Report!
I got this lovely cashmere at Smiley's. Now, my Jersey girls# and various others in the know may be rolling their eyes at this point. Smiley's classically has yarn for the non-snob, frequently at ridiculously low prices.
Most of their stock is Lion Brand, Patons, et al, with a healthy dose of Yarn Whose Name Shall Not Be Spoken, but rhymes with Dead Art. If you have to make something on a budget or something that has to be washed and dried or may be quickly outgrown, you can do worse than Lion or Patons, particularly at Smiley's prices.
They do carry some off-brand Italian luxury yarns for the snob in you.
A lot of the yarn at Smiley's is $1 a skein or $2 or $3... most is 30% - 50% off retail price. They tend to have limited colour selection, as a lot of their stock is discontinued or overstock or something.†† Some of it you probably wouldn't take if they offered to have Christian Bale hand-deliver it to you, but, again... worth checking in now and then to see if there's something you can use at half-price.
BTW... the fact that there was a personal thank you note from Frank on the invoice does not colour my feelings toward Smiley's at all. *ahem*
Back to the cashmere. This is a chained yarn, worsted weight, 50g/154 yards for $16 a skein. I got three of each colour (red and black). There isn't much halo on it, so it's a smooth softness, rather than bunny-soft like my cashmere sweaters. Lovely, nonetheless.
I figure I'll knit up a couple of lovely scarves for people I'm, frankly, not sure are going to be gift-worthy at Christmastime, but who cares? If you have a couple of "extra" cashmere scarves lying around, how are you going to bitch about that?
To sweeten the pot, each colour came in its own nice heavy plastic bag with the plastic handle that snaps together -- you know, like they give you at the Garden and Home Show to carry all your coupons and brochures. The Lizard Ridge‡‡ is currently travelling in one of my Smiley's bags.
[SUMMARY: Half-price cashmere. What more really *needs* be said?] 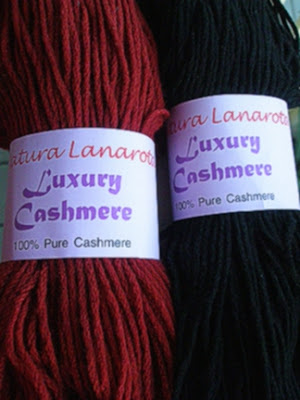 Last week during Landmanning for the Non-Landman,§§ I turned the heels on both of the debt socks for Brother (while he drafted the yarn, having nothing else to do). 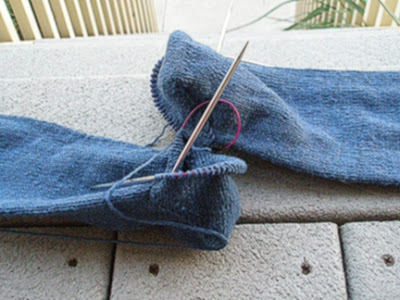 Brother looked at them and said, "I love heels."

I was a little surprised, 'cause I didn't know he'd been paying close enough attention to appreciate the glorious geometric wonder that is heels, so I got abnormally enthusiastic and said, "Me too. They're magic!"

He looked at me for a moment with that reptilian smugness only a little brother can exhibit and said, "I like them because once there's a heel it's a sock, not just a dick warmer."

Apparently, being twelve runs in the family.

[SUMMARY: The bloodline is doomed.]
I have been fondling this yarn over at Syl's House of Fuzzy Crack for weeks. As long as it's been out, I've been cuddling it and nuzzling it and asking, "Syl, what would you make with this?" and asking, "Syl, how many skeins would you use for a scarf?"
I imagine Sylvia is delighted I finally bought the yarn and stopped musing on it in this altogether too wishy-washy fashion.
I started knitting it up last night. As expected, it knits up like Muppet skin and very, very soft. I suspect it has a really nice hand.¶¶
It's microfibre, and (like Big Baby) says to hand wash and lay flat, but I suspect (like Big Baby) you can actually machine-wash it and -dry it as long as you don't get too extreme in temperature or beat it on a rock to wash it. Once I've tested that theory on this yarn, I'll let y'all know.
It's kinda hard to see the characteristic of the yarn... 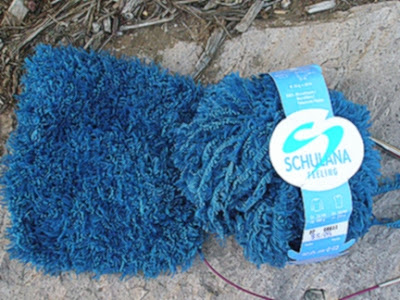 ...'specially when I got all artsy and nature-girl about it... 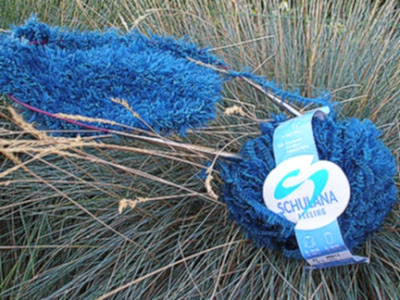 ...but it has a row of these cool loops like your average terry-cloth bath towel (only a little longer) and a row of silky soft Muppet## fur behind that.
Here. This is what the Skacel website has, and they should know. It's their yarn: 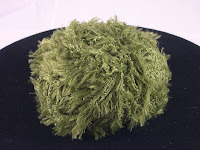 If you click-for-big, I bet you can see the loops and everything.
[SUMMARY: Ah, techmology.]
Happy Talk Like a Pirate Day, ev'ry-bahdy!


†FOOTNOTE (crossed): Because I have two in the living room and one is patently mine. You'd think the cat would gleefully take over the other one when he's upstairs ('cause y'all know he has his own recliner in the basement). No, no. Through the perversity of cats, he wants to sit on top of my head on the back of MY recliner, sometimes sticking one thorny paw under the edge of my shirt to... what? Maintain control? Leave a mark? Warm his foot?

‡FOOTNOTE (double-crossed): Circular needles are the best cat toy ever.

§FOOTNOTE (swerved): He has added raisins and pumpkin seeds to his list of favourite foods and trying to snack on a little gorp is now like trying to wrestle a well-oiled octopus with claws and a cold, wet nose.

¶FOOTNOTE (paragraphed): I do not believe this was cause or even related to the act of barf that followed.

††FOOTNOTE (ddouble-ccrossed): I'm totally blowing smoke here. It's just an educated guess, and not that educated at that.

‡‡FOOTNOTE (doubble-crossssed): Almost done with the first strip, thanks for asking.
§§FOOTNOTE (snakes eat their tales): When I was in college, I took a class called Studio Art for the Non-Artist. Now, I took a lot of art in high school and consider myself reasonably artistic, but the bent of the class was to give an art elective credit to, say, business majors. We dabbled in the shallow end of many media and theories, but it would have been nearly impossible to get less than a B in the class unless you just completely failed to go or do any art.
Every time I end up in a class or lecture that's too-too basic, I immediatly dub it "Something for the Non-Somethingist."
¶¶FOOTNOTE (paragraphs coming out of my ears!): Yeah, I still don't know what "hand" means.
##FOOTNOTE (pounded like a two-dollar whore): Yes, I've used the word "Muppet" several times now, exhibiting a redundancy and obsession extreme even for me. I really, really want to knit my own Grover. I need a lovable, furry pal.
Go ahead. Be twelve. Take that any way you want.
Posted by Marin (AntiM) at 7:22 AM