First, I'd like to address Ally's request that I discuss the current leader in the Onion Shattered Expectations Football League. I can only assume that at the time she wrote that, her team† was in the dubious‡ lead.

Not so much now.

Our leader is the ominously-named That Foot is Me. He/She has *six times* the points our Ally does.%

I, on the other hand have -245 points. Yes, that's a negative. Apparently, even when I try to pick losers, I manage to pick losers at losing.

This explains so much about my love life.

My regular fantasy league isn't doing any better, but I am choosing like a champ^ in the two Pick 'Em leagues I'm in. Somehow, I can identify winners in groups.

[SUMMARY: Maybe I need to rethink my views on polyamory.§]

In fibre news, I purchased some Mountain Colors sock yarn¶ Thursday night during my little drop-in to Stitch Therapy at Sylvia's New House of Fuzzy Crack. As it is gift yarn, I chose the colours strictly for the recipients and ended up with brown and red.

It wasn't until I got home that I realised I had, in my hot little hands, the correct versions of the Not-So-Deadly Sins received in my Seven Deadly Sins Sock Club inaugural shipment. 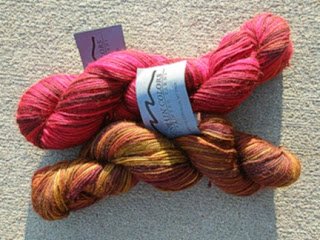 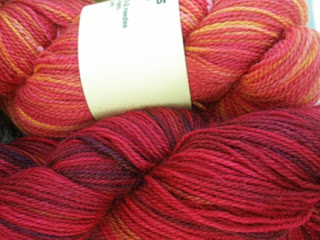 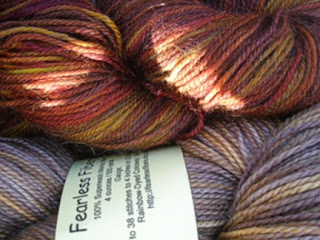 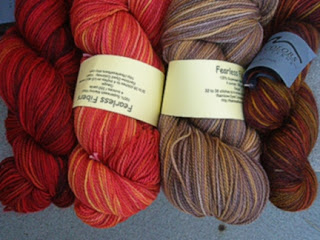 I know the new red looks pink in the sun, but it's much closer to true in the shadowy pictures.#

[SUMMARY: It isn't very entertaining, but it is pictures of yarn. And that makes it all better.]

OK, now I need to get to work. Happy Monday.

‡FOOTNOTE (double-crossed): For those of you scoring at home, the Onion league allows you to pick eight scoring units from a list every week and whomever fucks up most royally wins. You get *negative* points for touchdowns and BIG points for completely failing to get in the end zone at all.

§FOOTNOTE (swerved): Just kidding. I think it's like being gay or straight: you're either cut out for it from the very beginning or you're just plain not. And holy cats, am I not.

¶FOOTNOTE (paragraphed): As GIFTS. NOT to add to the overwhelming sock stash. Don't look at me that way.

#FOOTNOTE (pounded): Shadowy Yarn on a Shadowy Planet. Anybody get the reference? Ally? Lyda?
Posted by Marin (AntiM) at 7:35 AM