There are still deadlines. Deadlines everywhere. Does this faze me? No.

My fantasy football draft is tonight. I have done, let's see... I've pulled the list of bye weeks. Now, if it were just me, playing little fantasy games,† I'd just pull a cheat sheet from somewhere and plan on lots of beer and little actual sporting success this season. As I am the commissioner of our little league,‡ I really should make up some draft sheets and do up some numbers to pick for draft order and all that. Am I buckling down to do that? No.

I really must get to the post office at lunch because, despite her ongoing abuse, Ally really should get her final Secret Pal package. It's only been two months. Am I carefully plotting my schedule to include this additional stop in my day? No.§

Because I have pictures of an FO and that trumps all responsibility and sense of shame.

[SUMMARY: Pictures of yarn make it all better.]

Kisses and loves to Knit Picks for replacing, without question, the leprosy-ridden circ and the deformed Options cable I received. I contacted them about these items well out of the 30-day prescribed return period and they didn't fuss or fret. They just sent replacement items and apologised profusely for subjecting me to inferiour goods. We all know this is probably how it should be. We also all know it's a rare and wonderful thing when customer service runs so beautifully.

And how painful it is when your knitting is bollocksed up for days -- OK, any period of time -- because of a wrong, missing or wonky product? Y'all know.

In entertainment news, I went to see a group called Face in Lafayette last night.

A quick tangent about Lafayette: driving up Highway 287, we came upon a majestic city sign on a corner. You know what I mean -- the miniature wall surrounded by flowering plants, proudly announcing the name of the town and perhaps its motto or primary tourist feature ("Home of the World's Largest Artichoke!"). This sign said, simply, "City of Lafayette." For miles around, fields. Big sky. Little brown birds. Audible crickets. Giving lie to the concept of "city."

I said to my brother, "And me without my camera."#

[SUMMARY: It's all about the blog.]

Now a little backstory to the evening's festivities: our father, a man not given to excess of anything but fishing equipment and, for some reason, shoes, sent a very cryptic email to Brother, eBeth and me about six weeks ago, under the subject line, "A Date."

He asked us to pick one of two dates and keep it open. He said he was getting us tickets to something that he wasn't going to explain, but he guaranteed we'd enjoy. Something we *had* to see.

Once he got the tickets, he announced that he wouldn't be going, as he would be in Alaska, but have fun. He then explained it was an a cappella rock band. He assured us that this was certainly not his sort of music (i.e. -- rock), but they were so amazing he was a fan.

Brother and I agreed the question of "What does Dad think I have to see?" was almost more interesting than anything that could possibly go on stage.

[SUMMARY: Anticipaaaashun... it's making me wait...]

A brief review: They are excellent at what they do, though there is a sort of Up With People veneer that I suspect they have to maintain for their demographic and in the scope of a cappella contests in which they compete.

The song selection was mostly soft rock pop stuff, which is not so much my thing. There were a couple of soulful, gospellish songs that really worked well in that style (and the big guy has a hell of a lot of soul for a white dude). I have to admit "Calling All Angels" is far more interesting as a harmonic vocal thing than it ever was on the radio. OK, the Pink Panther theme was awesome and Safety Dance was brilliant.

Which brings us to my next career: I want to be the Malcolm McLaren of a cappella music. I came up with a list of several songs that would be really cool and sound nothing like Train.††

[SUMMARY: Nothing should sound too much like Train if it can help it.]

My questionable taste moment for the night: The owner of the venue (who talked a lot, said the little black kettle) said, "The first time these guys came on my stage, my jaw just dropped." I started giggling helplessly, 'cause -- y'know -- if six guys came all over my stage, I'd probably be a little stunned too.

The first Tulip sweater, she is finished. And washed. Thus: 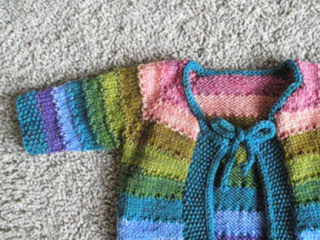 I promise you the left sleeve isn't missing or deformed or anything. The picture's just artsier this way.

And, because I can, a crane. For me. 'Cause sometimes you got to do for yourself instead of waiting on others to do for you.‡‡ 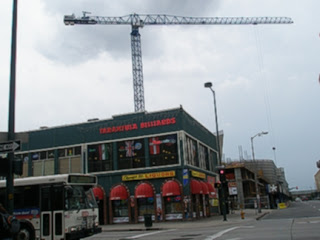 ‡FOOTNOTE (double-crossed): Which sounds impressive and glamourous until you realise it's all about being the secretary.

¶FOOTNOTE (paragraphed): Despite any implications from the last post, this does not entitle them to a share of my big dick. Of the big dick I'm... oh, you know what I mean.

#FOOTNOTE (pounded): You know, a picture paints a thousand words, so since I don't have a picture, I have to keep yammering about it until I'm convinced you have a clear mental image. You're welcome.

††FOOTNOTE (ddouble-ccrossed): When Doves Cry, Ghostriders in the Sky, Love Cats, and a version of Ain't No Sunshine that would allow for some really dramatic staging (to name a few).

‡‡FOOTNOTE (doubble-crossssed): Yeah, I didn't get any this weekend. I'm not bitter. I have my crane. And my dog. And this lamp.
Posted by Marin (AntiM) at 7:34 AM