So I ordered some Sugar 'n' Cream from Herrschner's because I don't have nearly enough yarn† and I really got a bug to knit washcloths‡... oh, some time last week.

Did you know Herrschner's has some really good yarn?

Why didn't you tell me?

Now, I've received my share of Herrschner's catalogs in my day. And, because they happen to be headquartered in my mom's hometown,§ I've been to the Herrschner's store. The impression that has stayed with me is "cheap."^ And possibly "totally craptastic version of Michael's."

I picked up the mail this morning and there was the package from Stevens Point.% I hit the office early and Googled Herrschner's to 1) be sure I was spelling it right,¶ and 2) get the URL to link here. What to my wondering eyes should appear? Debbie Bliss! Elsebeth Lavold! Louisa-freakin'-Harding!

Herrschner's has Rowan in their Miscellaneous section.

I did a couple of price comparisons, and some of them are downright astonishing: Debbie Bliss Alpaca Silk at about $5 a ball. It runs upward of $8 most other places I looked.# Noro Kureyon, not such a bargain at a very standard $8.50 a ball, but mostly good prices.

Or buy Cider Moon yarn just because they tell me there are only two skeins of that colour and I can be the only kid on my block with Hex socks.

Or panic and press the "charge my card" button just because the Fearless Fibers Seven Deadly Sins Sock Club only has two memberships left.

Or even *contemplate* knitting cashmere socks.

Nope. Not quite feeling that.

OK, so I'll just let you know when I find something good.

[SUMMARY: She used THAT many words to bring us back to square one?]

Does anybody out there know what happened? What's happening? Will they ever come back? I feel like I've lost my new best friend.

Have you seen the new Knit.1? Holy fucking cats...

While there's a cool Dia de Los Muertos doll family,†† there is a paucity of really good patterns and a plethora o' weird-ass, what-were-they-thinking stuff. Flip through it next time you're near a newsstand. It'd be good lunchtime entertainment.

Guess who just volunteered to help with the local Sticks and Stitches‡‡ this year?

Lookie there. I did pretty good for someone who thought she had nothing to say and almost skipped today's blogpost.

‡FOOTNOTE (double-crossed): That would be the C part of the OC thing.

%FOOTNOTE (percented): It was kinda like a letter from Mom.

¶FOOTNOTE (paragraphed): Maintaining the high standards of spelling and grammar you've come to expect here at the Rickety Blog...

#FOOTNOTE (pounded): Which would pretty much be Yarn Market and The Yarn and Fiber Company. Yarn and Fiber came in at the second lowest price at $7.65. 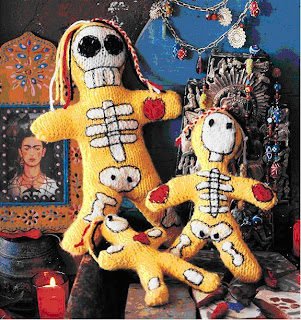 ‡‡FOOTNOTE (doubble-crossssed): NHL hockey with knitting. I don't know if it's league-wide or just in Colorado since, y'know, we have Interweave Press here. 'Tis a privlege to live in Colorado.*

*FOOTNOTE WITHIN A FOOTNOTE: The motto of the Denver Post.