The Bare,* the Swear and the Family Affair

Sunday was Teach Your Male Relatives to Knit day.

Well, not all of the male relatives. Can you imagine teaching this to knit?:

Little brothers can be such a drag 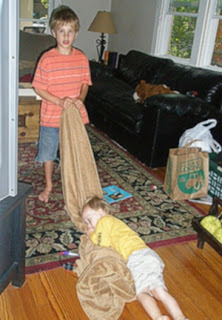 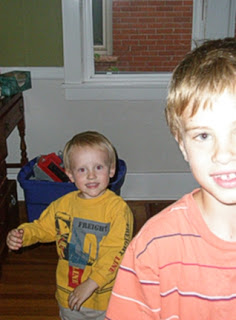 Before I get a pile of comments and mail about this being the best time of life to teach kids to knit, I KNOW. But these kids?

They are wonderful. They are smart. They are charming and funny and loving and cuter than socks on a squirrel (to quote Shanny). But there's a reason we waited until after bedtime to commence the knitting lessons: Energy.

Enthusiasm for all things crashing and flying.

They do have their quiet(er) moments.† 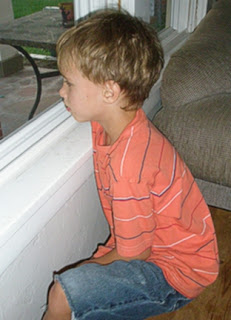 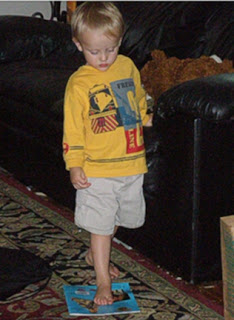 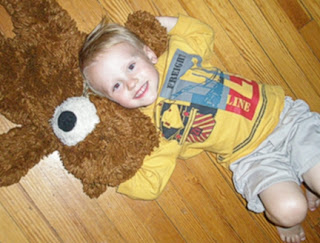 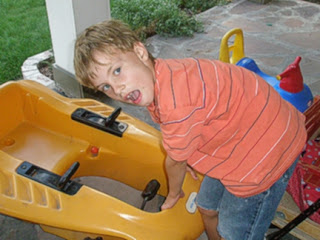 [SUMMARY: Some people have no inside voices.]
Oh, and check out the post-bath hair.‡ 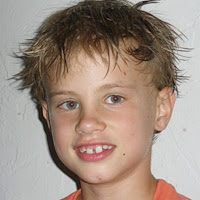 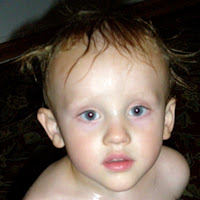 Dad and Brother saw the camera come out and had a little confab about the best way to avoid being knit-outed on the innernets. They came to the conclusion that the best solution was to knit naked.
Now, Dad isn't allowed to read the blog, but Brother drops by fairly regularly. He should know better than to think naked male knitters would be a deterrent to photo ops.§
[SUMMARY: Silly sibling, dicks are for vids!]
Dad managed, through the grace of needing a lot of supervision,¶ to avoid the camera entirely. He also forgot his glasses and was worn out from the day's work -- and probably the grandsons -- so he just got started and developed a knitting headache# and went home.
Dad was gone. We had no parental guidance.% Let the wild rumpus begin! 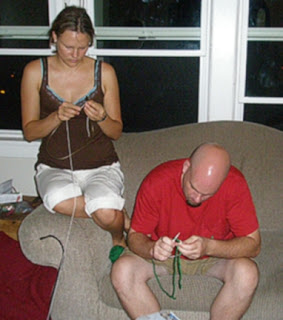 *rumpusrumpusrumpus*
eBeth (sis-in-law) has knit before, but wanted a refresher course and perhaps some assistance in keeping her project from sprouting new stitches†† at every turn. She did great, though with knitting sport-weight yarn on size 17 needles, the elegant interlocking continuity of knitting wasn't so evident.
Next time, she will knit with the "good yarn." Lovely, thick stuff she got at the Estes Park Wool Market three? Four? Two? years ago. It's a gorgeous deep brown (maybe charcoal. I just know it's pretty) and smells of lanolin. And it's much better suited to the big needles.
Wanna see something cute?
He doesn't stick his tongue out, but he does this thing with his lower lip... 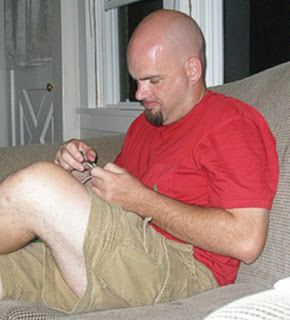 His father does that too.
I spent a measurable amount of time assuring both Dad and Brother that there is nothing sexier than a man who knits. When you're training, you have to be liberal with the praise and the knitty treats. Y'all know.
Brother turned to eBeth more than once to ask some version of "Do ya think I'm sexy?" At one point, she monotoned, never looking up from her knitting, "I've never wanted you more than I want you right now."
[SUMMARY: The family that knits together...]
For the record? Brother is a natural knitter (and I suspect he did a little pre-lesson Google prep, since he knew continental knitting as soon as I showed it to Dad). Dad likes continental, Brother sticks with English. Brother knits *tight*. Maybe tighter than me. Brother is knitting bulky, Dad is knitting worsted. Um... Brother's is green. Dad's is navy.
Anything else you need to know about the knitting styles of the AntiM family?
[SUMMARY: Sometimes it goes too far, the information. Sometimes is too much.]
Look! A Special Guest Cat for Scale (a/k/a Cousin of Cat for Scale).^ 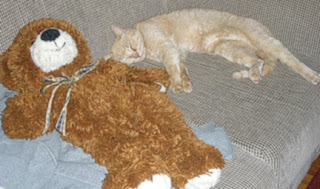 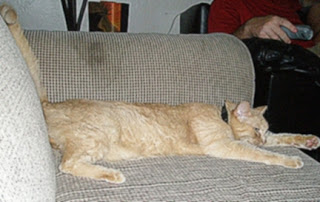 [SUMMARY: Variety is the catnip of life.]

By the way? Lizard Ridge? So my bitch. 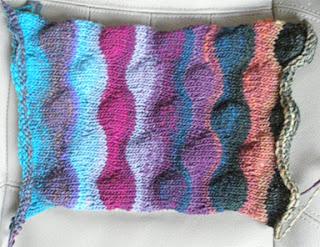 [SUMMARY: Hubris...]
I've walked by this sweater at Homer Reed Ltd. many days on my way to lunch.
I think the peach on the knit portion of the rib is a little... meh. But I like the overall look of it. Maybe if the periwinkle@ were in dominant rib position.‡‡ But it's a cool knitting thing and I took a picture of it just for you. 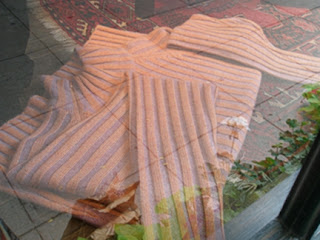 This, because I like the clouds and the bridge and it didn't look right when I cropped I-25 out of the picture. 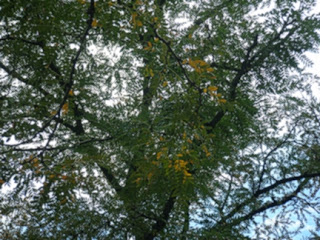 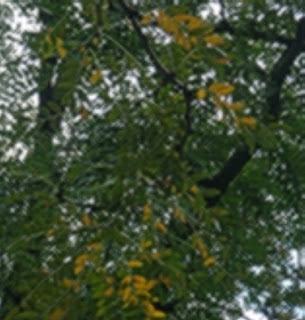 The leaves are turning.
All up and down the mall, I noticed the trees getting yellowy and rusty and it's not just pollution and other urban tree blight.
It's autumn on the way.

*FOOTNOTE (asterisked): OK, so not really, but they threatened.
†FOOTNOTE (crossed): Dr. Doom is surfing on a copy of "I Taught Myself to Knit," for those of you scoring at home.
‡FOOTNOTE (double-crossed): I wish all those super-hip young guys with the carefully-sculpted bed-head look could see how much they resemble a three-year-old straight from the bath.
§FOOTNOTE (swerved): Indeed, with this crowd, I should be able to make spending money charging for pictures of naked male knitting.
¶FOOTNOTE (paragraphed): And don't think for a second that's a coincidence.
%FOOTNOTE (percented): If Rob Halford just wailed in your reptile brain, we really need to have a beer some time.
#FOOTNOTE (pounded): Poor Dad. I started him out with the Magic Cast-On and toe-up socks. Hell of a way to learn to knit.
††FOOTNOTE (ddouble-ccrossed): You know, as Brother was adding new stitches with alarming regularity, I was consoling him with, "It's very manly. All the boys I've taught to knit add stitches." I have since realised that I've taught two boys and one girl to knit. Is it a guy thing or a new knitter thing? Maybe eBeth's issue is also adding stitches (generally by not dropping the knit stitch off the left needle). Thoughts? Anyone?
^FOOTNOTE (careted): You may notice the bear in many pictures. Mr. Brown really gets around. Maybe that's the bear I should have used in the heading.
$FOOTNOTE (moneyed): Ally! Alert your nephew! Embarrassing old person hip attempt!
@FOOTNOTE (atted): Yes it is. Periwinkle and Peach. Kinda like a washed out pastel Bronco sweater.
‡‡FOOTNOTE (doubble-crossssed): Is that terminology? OK, now I'm just making shit up.
Posted by Marin (AntiM) at 7:42 AM